Workers for auto parts supplier Takata struck the firm’s factory in Ciudad Frontera, Coahuila, Mexico on May 13. The workers walked out after being told their profit-sharing bonus would be 1,000 pesos (US$53.15). Previously, the bonus, given after an employee had worked 60 days per fiscal year, was ten times that much.

The workers, who do not belong to any union, also complain that for several months Takata has been sacking workers with seniority and imposing two 12-hour shifts, replacing the three 8-hour shifts, without overtime pay.

Conductors for the Collective Transport System (STC), Mexico City’s metro train network, stopped work in the early morning hours of May 12. The National STC Workers Syndicate (SNTSTC) said the job action was called to press for improved wages, payment of overtime, equipment repairs and an end to outsourcing.

SNTSTC issued a communiqué that accused the STC of prioritizing aesthetic restoration of stations over infrastructure improvements and demanded the provision of supplies such as medication, uniforms and work clothes. The union agreed to suspend the action and “meet with the enterprise’s representatives” in the “spirit of resolving problems.” By 9:00, service began to normalize.

Hundreds of thousands of teachers, members of the Colombian Federation of Education Workers (Fecode), began an indefinite strike May 11 over the government’s failure to fulfill their contract. On May 12, teachers held assemblies and marches in various cities across Colombia. Fecode said 330,000 educators participated in the mobilizations, with “the support of students, parents and the educational community in general.”

Teachers are demanding: a salary raise of 28 percent, the “finalization of the process of new contracting and guarantee of provision of health care services,” a process that has been delayed, and the regularization of the workday. They also want an end to overcrowded classrooms and improvements in teacher education and in evaluation standards.

Professors in Argentina began a nationwide strike on May 8 following the failure of two months of negotiations with Education Ministry representatives. The parties say there are at a stalemate over salary demands. The professors’ unions, Conadu and Conadu Historica, have proposed a 35 percent pay increase while the government has not budged from its 20 percent offer.

Union officials cite last year’s raise of 35 percent, which fell short of the 43 percent inflation rate, and are demanding the 35 percent in view of the projected rate of 25 percent for 2017. The Education Ministry claims that the professors suffered no loss of purchasing power in 2016 because the official inflation rate was only 24 percent. However, nobody outside of the government takes its chronically underestimated inflation figures seriously.

The week ended without a response to the unions’ demands. Conadu and Conadu Historica called on their members to join a protest march May 16 in Buenos Aires.

Guyanese factory and fieldworkers on the Rose Hall sugar estate marched four miles May 12 to protest state-owned GuySuCo’s planned closures of several sugar estates. The protesters were joined by small businesspeople, taxi drivers, families and friends, all of whom would be impacted by the shutdowns scheduled for the end of the year.

Protests have taken place repeatedly in Guyana since the government’s January 2016 announcement of the imminent closure of Wales Estate. The protests failed to halt the shutdown of factory and field operations at the end of last year and surrounding communities have suffered a severe economic downturn and chronic unemployment after 1,700 workers from the East Wales estate lost their jobs. The Rose Hall action came on the heels of a “white paper” presented to the National Assembly May 8 outlining plans for shuttering Rose Hall and the Enmore/LBI Estates.

Workers for the Tranquility Bay resort on the island of Antigua protested on May 8 against delays in the payment of their wages. The workers, whose pay schedule is fortnightly, have not been paid for six weeks.

About a dozen protesters demonstrated in front of the security gate, and called out to their fellow workers inside the compound to join them. Management, meanwhile, has refused to communicate with the workers or the media.

Drivers for the Antelope Valley Transit Authority (AVTA) in northern Los Angeles County, California were locked out on May 8 following a six-day strike. Teamsters Local 848 advised Transdev, the contractor that supplies drivers to AVTA, that they wanted to return to work after the third unproductive strike in less than two months.

Transdev, a French company that supplies drivers to multiple US transport companies, has been unmovable in their resistance to drivers’ demands for higher wages and a request that the company increase contributions to retirement and health care costs. The Teamsters have filed charges with the California Public Employment Relations Board to get a ruling that would designate AVTA as a “joint employer” alongside of Transdev to boost the illusion that the transit authority would be more amenable to workers’ demands than Transdev.

Nearly 2,000 telecom workers in New York City and Bergen County, New Jersey remain on strike against Spectrum, formerly Time Warner Cable, which was acquired by Charter Communications in a $65 billion mega-merger in 2016. Workers are opposing company’s demands for sweeping pension and health care concessions and want to end management’s practice of penalizing technicians for customer problems stemming from the company’s inadequate or otherwise failing infrastructure. 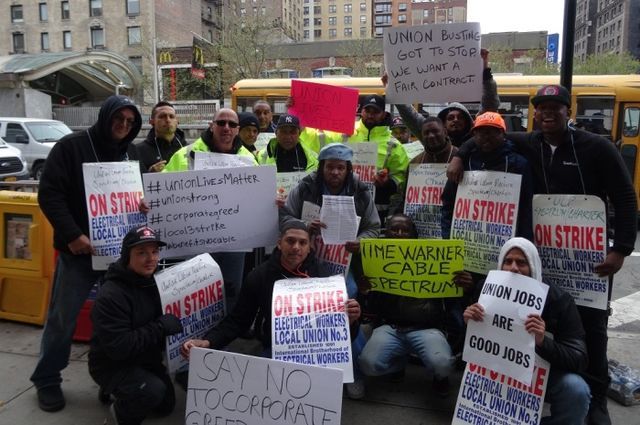 The workers are members of the International Brotherhood of Electrical Workers (IBEW) Local 3, which has isolated the strike. The Communications Workers of America (CWA) is blocking strikes by tens of thousands of AT&T workers after it betrayed last year’s six-week walkout by nearly 40,000 Verizon workers. The unions are promoting the illusion that Democrats like New York Governor Andrew Cuomo will defend workers. Meanwhile, every section of telecom workers is facing demands for similar health care and pension concessions from the giant corporations, which are raking in record profits and carrying out multi-billion mergers and acquisitions.

Faculty at the University of Illinois-Springfield (UIS) voted on May 12 to ratify the contract agreed to between the U of I administration and UIS United Faculty. Tenure-track faculty at UIS went on strike May 2, largely over the administration’s refusal to incorporate protections for promotion and tenure into the contract, as well as to force a conclusion to negotiations that had dragged on for 20 months since the faculty’s vote to unionize. Union negotiators announced an agreement had been reached on May 7, ending the strike.

According to a union news release, the ratification vote was unanimous. Contract details were being withheld pending the vote, but have still not been released, although the union has made statements that the contract will run until 2020. The union’s Facebook page indicated that faculty read the contract before voting, but it is not clear if this means the entire contract, or if this was a mere contract “summary,” in which the more onerous details have been left out.

The contract is the first negotiated by a faculty union at the Springfield campus since 1995, when the school, formerly known as Sangamon State University, was taken over by the University of Illinois, shredding existing labor contracts.

Seven months after the Bakery, Confectionery, Tobacco Workers and Grain Millers International Union ordered striking workers at the Bethlehem, Pennsylvania candy maker Just Born to end their four-week walkout and go back to work without a new contract, 18 workers have still not been hired back. One of the victimized workers, Lissette Baez of Allentown, has filed an unfair labor practices suit against the BCTWGU Local 6, alleging the union failed to sufficiently defend her job despite her 16 years of seniority. “[The union] used us as bait,” said Baez’s fiance, Jose Santiago, a 22-year Just Born employee, told the local Morning Callweb site.

Four hundred workers walked off their jobs on September 7, 2016 in the former steel town over wages, health care and pension benefits. The privately held company, whose products include marshmallow Peeps, Mike and Ikes, Hot Tamales and Goldenberg’s Peanut Chews, wants to put new hires on a 401 (K) pension plan and stop paying into the multi-employer pension fund. The union ended the walkout on October 3, 2016, allowing the company to replace workers with strikebreakers. Baez has run out of her 26 weeks of unemployment checks and is surviving on $200 a week from a union benefits program.

The strike by over 400 workers at the Toronto Zoo that began last week is now expected to keep the facility closed until the dispute is settled.

Talks are continuing this week between management and negotiators for the Canadian Union of Public Employees (CUPE) whose members include zookeepers, horticulturalists as well as maintenance and administrative staff. A last-minute bid effort by CUPE to avert a strike last Wednesday failed to resolve disputed issues around job security and contracting out of jobs. Workers at Canada’s largest zoo voted unanimously in favor of strike action. For its part, CUPE says it is fighting to keep provisions guaranteeing at least a “minimum level of staffing.”

With the provincial Liberal government already warning it may impose legislation against it, the union alliance covering 175,000 construction workers in the province of Quebec has warned that a strike could be called as early as next week after workers voted 93 percent in favor of strike action.

The alliance includes the construction divisions of five unions, the FTQ, the CSN, the CSD, the Quebec Construction Union (SQC), and the Quebec council of construction workers (CPQMCI) whose contracts expired at the end of April. With a government history of legislatively ending strikes in the construction industry, the unions say they are seeking anti-scab legislation in addition to expanded bargaining rights for wages. Determined to defy the strike authorization vote by its members, union officials say they want to settle the dispute in negotiations now overseen by a government-appointed conciliator rather than a strike.