A fire broke out early Monday morning in a home in Flint, Michigan, killing a father and his two teenage children. The authorities have not yet released the names of the victims who are the latest to perish in a house fire in the economically ravaged city, which has suffered years of budget cutting and, since 2014, the poisoning of its water supply.

The fire took place on Greenway Avenue on Flint’s north side. According to police reports, the children’s mother escaped the blaze when she jumped from a second-story window. She ran to a neighbor’s home and banged on his door, screaming that her children were trapped in the home. The neighbor called 911 at approximately 2:30a.m. By the time firefighters arrived seven minutes later, the house was completely engulfed in flames. 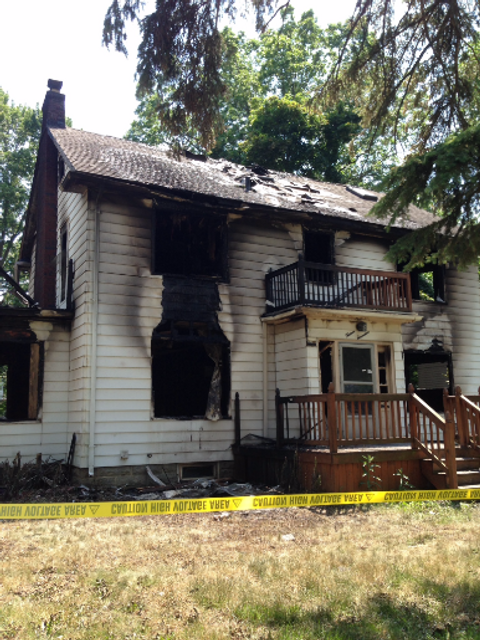 The burned out home on Greenway Avenue

The father is believed to have been in his fifties, while the children were aged 17 and 19. The mother, who was taken to nearby Hurley Medical Center, is expected to survive.

The fire’s cause is still under investigation. Authorities told news reporters it may take several days for fire inspectors to determine a cause and origin of the fire.

Residents told World Socialist Web Site reporters that while the family mostly kept to themselves, they were nice people who had friendly relations with neighbors in the area. One resident, David Peters, a plumber, told the WSWS the neighborhood is one of the more economically stable in the city. “This street is all homeowners. Nothing happens here. In other places, yeah. But not here. If you’ve got to live in Flint, this is one of the better spots to be in. [The fire] was really unusual.”

The fire comes just over a week after another deadly fire on the city’s north side. In the early morning of Sunday, June 4, a fire broke out in a home, killing 61-year-old Joycelyn Wakefield. Wakefield’s two granddaughters also sustained injuries when they attempted to enter the home to save her. They are expected to recover. On May 7, 16-year-old Quintin Lee McCann, an autistic high school student, died in another house fire on the south side.

The state of Michigan has a higher rate of fires and a greater risk of fire-related deaths and injuries than other states, according to the US Fire Administration. In 2014, the most recent year for which data is available, there were 3.3 deaths and 10.9 injuries per 1,000 fires in Michigan, above the national average of 2.3 and 10.4, respectively.

The city of Flint suffers from a higher-than-average rate of fires, which are often caused by space heaters or other unsafe heating devices, faulty wiring in homes, and a lack of adequate fire detection systems. Flint homes are often older, making them more susceptible to fires, which can start and spread quickly. Last month, Flint Fire Chief Raymond Barton told reporters, “Most departments don’t have the number of fires that we have in Flint.”

Despite this, successive city governments and state-imposed “emergency managers” have repeatedly slashed fire department funding. City worker layoffs, a 20 percent wage cut and constant threats to pensions and health benefits have contributed to a recent wave of firefighter retirements, which has left Flint firehouses understaffed. The Federal Emergency Management Agency allocated $3.7 million to help replenish the city’s firefighting team, and over 30 new firefighters are expected to be hired. But the new firefighters will need training before they begin work later in the summer. Flint firefighters have also had to contend with worn-out gear and an aging fleet of fire trucks.

The city has been devastated by decades of deindustrialization. General Motors employment in the “Vehicle City” has fallen from 80,000 in 1978 to less than 8,000 today. While the highly profitable company pays billions to wealthy stockholders, it has left its birthplace in economic and environmental shambles.

Over 40 percent of Flint’s nearly 100,000 residents live in poverty, and many do not have the means to fix up homes. At the same time Flint residents are largely unable to sell their homes—which have plunged in value—due to the impact of the continuing lead-in-water crisis.

Residents told the WSWS the three-year water crisis continues to affect their lives. One woman said she was forced to move out of the city and into the surrounding area because of a $300 monthly water bill. Other residents denounced plans by city and state officials to cut off the distribution of bottled water and many reject claims by government officials that the water is safe to drink. The bulk of the lead water mains and service lines remain in place, in addition to contaminated indoor plumbing.

One local resident told the WSWS she is unable to use the water for drinking or cooking, and that she is afraid of what will happen when bottled water is taken away. When asked about officials’ claims that there is no money to resolve the crisis, she said, “I think they’ve got a lot of money. They’re just doing whatever they want to do with it instead of helping us.” 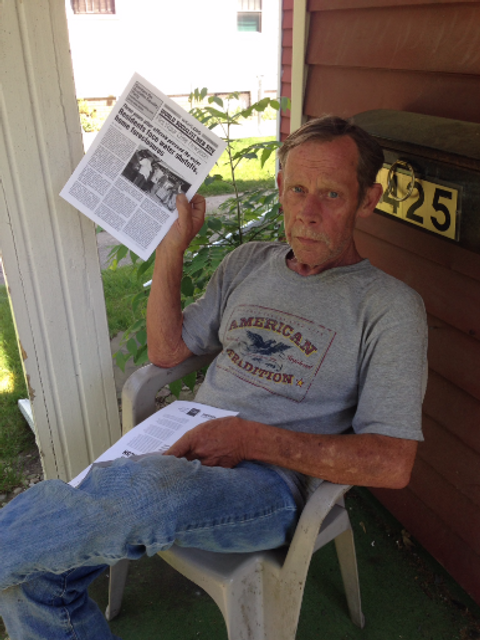 The plumber, David Peters, who lives down the street from the fatal fire, said of the water crisis, “It’s pretty disgusting what they did to us. I think it stinks. They say, ‘Yeah, it’s all good now. You can drink it,’ and they’re going to cut off bottled water. I don’t care what they say, I’ll never drink it. I remember my girl upstairs, she went up and drew a bath. It looked like somebody just threw a bunch of mud in there. It was disgusting.

“Everybody in this city should get a brand-new water heater, because lead is a heavy metal, and when water is heated, all that metal goes to the bottom. So, no matter what you do with the lines, if you don’t change the heater, it’s still there.”

Peters described the hardship of living with the water crisis. “I can’t go anywhere. My life is here. Besides that, like I said, I do plumbing and heating. All my customers are here. If I go to another town, I’ve got to start all over again. I hate paying [for the water]. My water bill, when I looked at it, it says zero water usage but the bill is still $78. What kind of crap is that? There’s people in Arizona, in the desert where there’s no water at all, paying $35 a month for theirs. What’s the deal? Why is it so much here when we have all the water in the world? It’s crazy.”

When asked about the way forward for Flint residents who want to secure the right to good housing and clean water, he said, “You know what would have really changed this more than anything else is everybody getting up, and instead of complaining at their dining room tables, getting on the streets. I’ll bet you if 40,000 to 50,000 people showed up in front of city hall one day, all with the same purpose, that would not only be state news, it’d be national and world news.

“Kings and queens have been taken down. They might have all the power, and they might have everything, but once you lose the people, that’s it. I don’t care what you do. If you’ve got 2 million people walking up on you, I don’t care how many swords you got. You don’t have enough for all of them. They’ve got to go. It’s the same way here.”