A study published Monday in the Proceedings of the National Academy of Sciences of the United States of America (PNAS) indicates that human activity is precipitating “biological annihilation” and a mass extinction event.

The peer-reviewed paper, “Biological annihilation via the ongoing sixth mass extinction signaled by vertebrate population losses and declines,” argues that the severity of the ongoing biodiversity crisis is often underestimated by looking primarily at extinctions (the loss of all individuals in a species). The study looks more broadly at species’ population decline and argues that “Earth’s sixth mass extinction episode has proceeded further than most assume.”

The study was coauthored by Gerardo Ceballos of the Instituto de Ecología at the Universidad Nacional Autónoma de México in Mexico City and by Paul R. Ehrlich and Rodolfo Dirzo of Stanford University’s Department of Biology.

The authors argue that while the extinction rate is already alarmingly high—including at least two vertebrate species per year for the past century—this does not tell the full story. Even if species have not yet gone extinct, their numbers and geographic distribution are decreasing dramatically, signaling an accelerating trend toward eventual extinction.

Detailed historical data from 1900 to 2015 is available for about 200 mammals, which are often major components of their ecosystems. Most of these key species are in crisis, even though they are not extinct: “In the 177 mammals for which we have detailed data, all have lost 30 percent or more of their geographic ranges and more than 40 percent of the species have experienced severe population declines (>80 percent range shrinkage).” 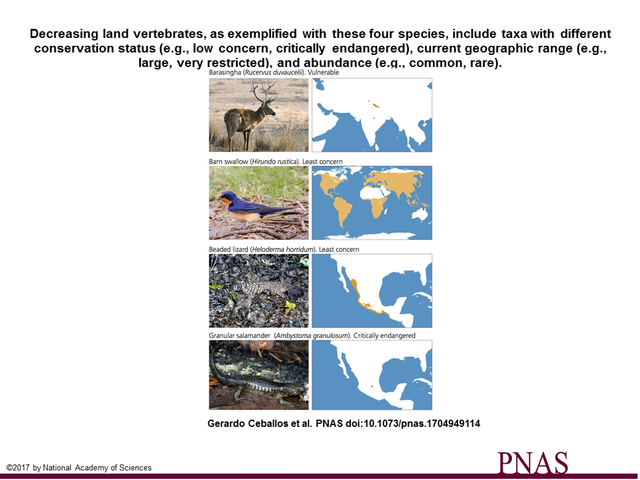 Because population declines presage extinction, the study concludes that the planet has already begun its sixth mass extinction—the first since humans evolved.

The most catastrophic known mass extinction occurred at the end of the Permian Period (252 million years ago), and is known as “The Great Dying.” Approximately 70 percent of terrestrial species died during this cataclysmic event, which is thought to have occurred due to massive volcanic eruptions.

The fact that PNAS, one of the top science journals worldwide, published an article raising the possibility of events along the lines of “The Great Dying” is a sign that the ecological crisis is far advanced.

The paper, which is only about five pages long, not counting graphs or references, uses the word “annihilation” six times, “catastrophic” twice and a variety of “decimation” three times. Ceballos told the Atlantic that such frank language is warranted. “It would be alarmist if we didn’t have the data,” he said. “Now it would be irresponsible on our part to not use strong language. I wish we could say we are wrong but unfortunately, this is what is happening.”

The breakthrough made by Ceballos, Ehrlich and Dirzo is their thorough examination of populations, rather than staying at the level of species. A population is a group of individuals separated from other populations, usually by geography. Each species is made up of one or more populations.

If a species is losing several key populations but its overall numbers have not collapsed, it often will not be recognized as being in crisis. However, if a species is atomized into disparate, isolated populations, with its overall habitat shrinking, that makes its eventual extinction more likely.

In other words, the loss of each population of a species is one major step toward its overall extinction, unless measures are taken to restore the population and reverse the crisis.

Because most studies focus on extinction and not the loss of populations, they understate the scale of the crisis. Not only is the decline in populations a prelude to a significant number of extinctions, but the pace of population loss is accelerating. 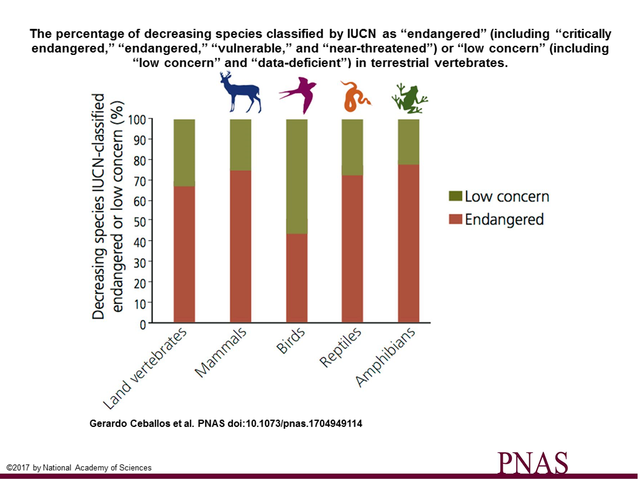 Because of the complexity of the environment, removing even a seemingly minor population or species can severely impact other species—if enough species go extinct, it can damage whole ecosystems. Human life as we know it relies on an increasingly strained ecological balance, and may be impossible if biodiversity is reduced too much. The loss of this dynamic balance, once it reaches a certain point, can cascade into a catastrophic, possibly irreversible collapse.

These factors are all caused or greatly exacerbated by humans’ unplanned and irrational interaction with the environment, rooted in the subordination of all social and economic life to private profit. It is worth noting in this context the mention of the potential environmental consequences of a nuclear war, which could be set off by any number of conflicts around the world caused by the division of the world into competing capitalist nation-states.

The authors identify “the ultimate drivers of those immediate causes of biotic destruction” as “human overpopulation and continued population growth, and overconsumption, especially by the rich.” One need not agree that population growth itself is the problem to recognize that human activity, without scientific planning, places immense strains on the environment.

Ceballos, Ehrlich and Dirzo conclude their paper by noting that “the window for effective action is very short, probably two or three decades at most.” Their article should serve as a notice that the clock is ticking for humanity to establish socialism—a social system in which life is scientifically organized around human need, including the need to be in harmony with the natural environment. Only through the conscious effort to place humanity on such a rational basis can ecological collapse be prevented.