The persistent Georgia O’Keeffe (1887-1986): An exhibition at the Art Gallery of Ontario

More than 100 works by the American artist 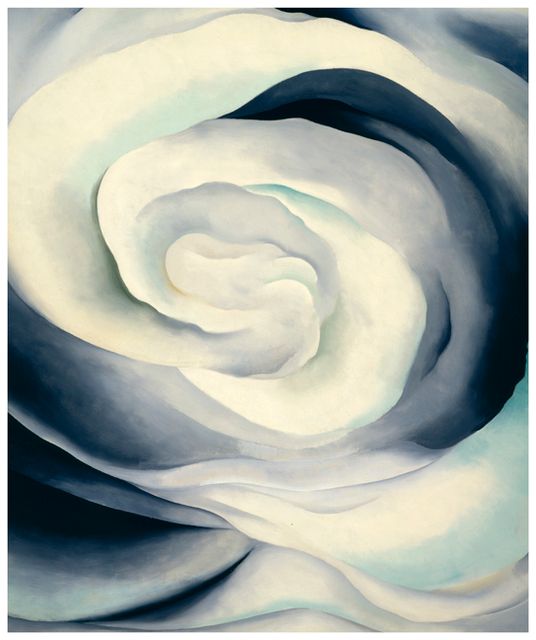 On its only stop in North America, at the Art Gallery of Ontario (AGO) in Toronto, Georgia O ’ Keeffe features more than 100 works of art by the American artist. Organized by the Tate Modern in Britain in collaboration with the AGO, the exhibition, presenting Georgia O’Keeffe’s varied styles and subjects in drawings, paintings, photography and sculpture, spans her lengthy art career and demonstrates her versatility.

The artwork in the AGO show varies in quality as well as style--and not all of it is O’Keeffe at her best. A painting such as Calla Lilies on Red (1928), for instance, while it reveals the sort of strong graphic quality in much of her painting, is emotionally distant, even affected. This is a recurring weakness in her art. The desert subjects of her later years are competent technical explorations, but lack a strong emotional commitment. 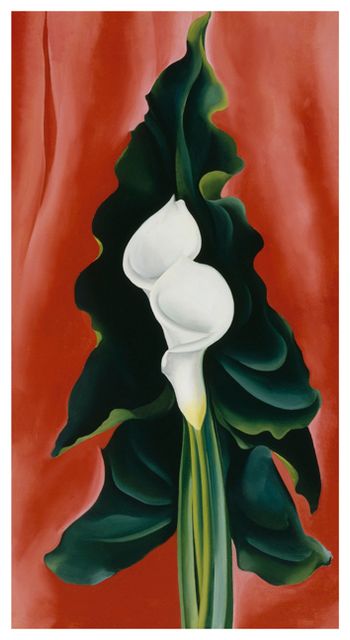 Though O’Keeffe explicitly rejected association with any particular artistic school or movement and boasted she had never been to Europe, she was nevertheless profoundly rooted in the modern art world through her own influences and interests, as well as directly through famed photographer Alfred Stieglitz, whom she eventually married. He introduced O’Keeffe to the American avant-garde in New York early in her career at his pioneering Gallery 291.

Her disavowals aside (she also famously declared that she didn’t like looking at art), it is known that O’Keeffe attended cubist and post-impressionist exhibitions and various other shows while living in New York. In any event, it is apparent from her work that she was subject to the modernist artistic ferment--and, of course, the social ferment that produced it. Various works at the AGO can be seen as fine examples of symbolism, cubism, surrealism, futurism and even abstract expressionism, and this sheer diversity is a noteworthy strength of the show.

When O’Keeffe began her art career, before women even had the right to vote in most of the United States, female artists undoubtedly faced particular challenges. However, she always resented her qualification by the press and critics as a “female painter” because of its demeaning implications. Later in life O’Keeffe regularly rejected the claims made for her work by feminists and others.

Because issues of gender weighed so heavily in her critical treatment during her lifetime, one of the stated aims of the AGO exhibition is to shift the conversation away from these factors and to offer the artist the “multiple readings” she has previously been denied. Regardless of the packaging, some of O’Keefe’s work holds up and some of it doesn’t. 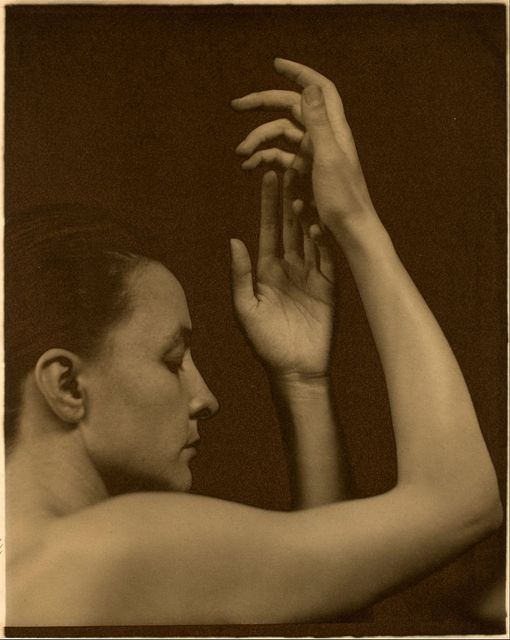 O’Keeffe was born in Sun Prairie, Wisconsin, but her family moved to Williamsburg, Virginia when she was 15. Her mother, who had aspired to be a doctor, placed a premium on her children’s education, making sure they were given drawing and painting lessons at home.

O’Keeffe distinguished herself in her art education, first at the Art Institute of Chicago and then the Art Students League in New York, where she won a summer scholarship. She began teaching in 1911, but continued her art studies at the University of Virginia.

She developed a friendship around this time with photographer and suffragette Anita Pollitzer, through whom she became involved with the women’s right to vote movement, and who was instrumental in introducing her to Stieglitz. The two met in 1916 and embarked on a love affair and a life-long relationship. 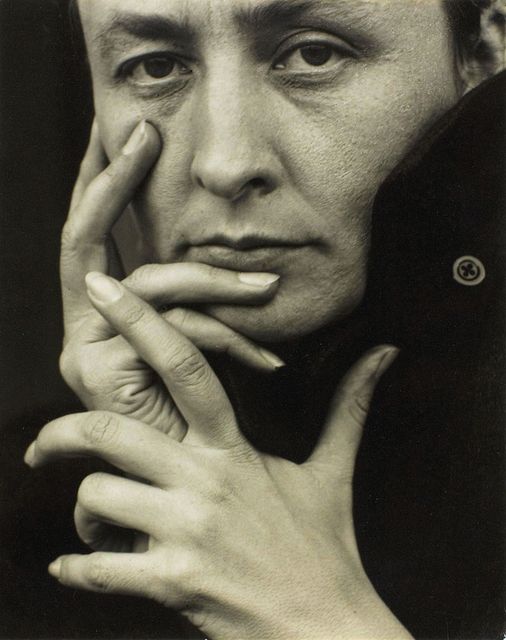 Deeply affected by the outbreak of war in 1914, O’Keeffe was greatly distressed when her brother Alexis joined the military in 1917. Teaching at a college in Canyon, Texas (near Amarillo) she found herself at odds with much of her community over her opposition to the war and her sympathies with German culture.

Stieglitz did not formally dissolve his quarter-century marriage to wed O’Keeffe until 1924, but in the interim their bond had grown through creative collaboration, as had their correspondence, which eventually swelled to some 25,000 pages. Georgia later asserted a greater independence and Stieglitz found himself increasingly alienated from her both geographically and intellectually. They stayed married, but both found other partners. O’Keeffe came to prefer solitude in her later life.

O’Keeffe found her way to life and art in New Mexico by the late 1920s and early 1930s. In her paintings from this period, she returned to representation of the landscape, abstracted and interpreted in her own distinctive style. A particularly strong work in the AGO exhibition, From the Faraway, Nearby (1937), depicts desiccated animal horns, which, along with skulls and bones, were among her favorite subjects. The work reveals a distinctly surrealist influence, although O’Keeffe made clear she did not embrace the ideas advanced by the surrealists, including their political-revolutionary conclusions. She did, however, maintain a dialogue with Mexican artist Frida Kahlo, who was deeply impressed with the surrealists’ aims. 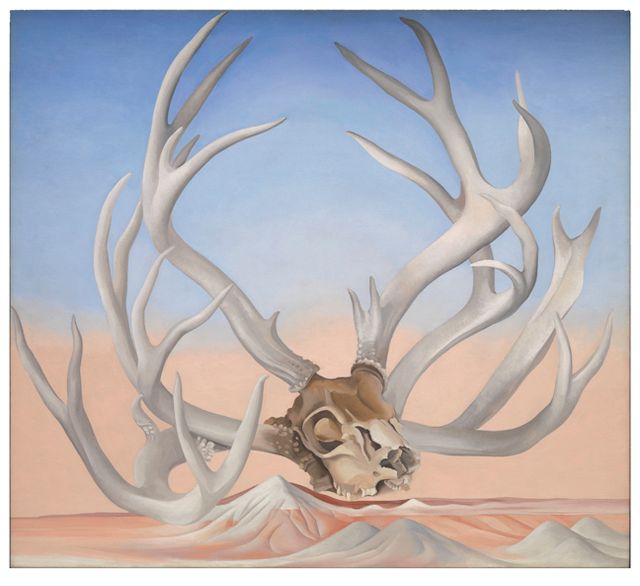 During the Second World War, the dark and desolate landscape paintings conveyed O’Keeffe’s response to the unfolding tragedy, even as she kept her distance from society and friends in the East. She evinced a certain aversion to human society throughout her life and even a degree of misanthropy. Speaking in 1944 of New Mexico’s blue skies and her paintings of animal pelvic bones, she commented that “they were most wonderful against the blue--that blue that will always be there as it is now after all man’s destruction is finished.” Indeed, around that time the first atomic bomb was being developed just over an hour away from her Ghost Ranch in New Mexico.

In 1946 Stieglitz opened the final show he was to have of O’Keeffe’s work at his new gallery, An American Place. He died some months later, but not before his wife had the first exhibition devoted to a female painter by the Museum of Modern Art in New York. In the years following, O’Keeffe continued to paint and to travel, incorporating the cultural influences especially of the Hopi and Pueblo Indians, but also of Greek, Egyptian, Asian and South American art.

By the time O’Keeffe came across his Gallery 291 in 1915, Stieglitz was among the most influential figures in the New York modern art community. Intent on promoting the advances of modern artists centered largely in Europe well before they were brought to public attention in the renowned Armory Show of 1913, he was especially intent on developing a distinctively “American” brand of modernism. 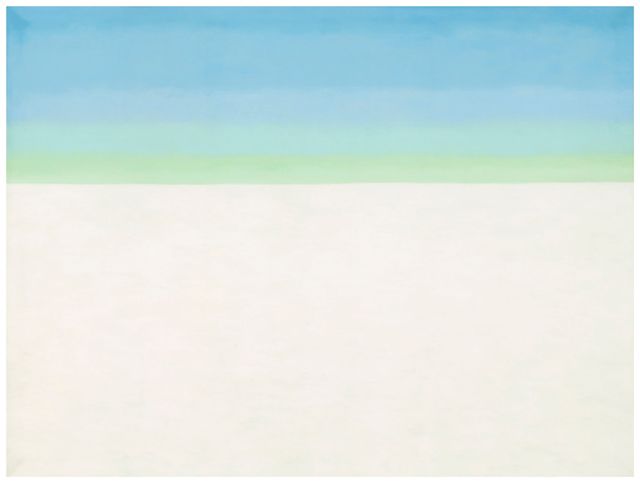 Never terribly comfortable with art theory, O’Keeffe’s own approach could best be described as intuitive. She was inclined at first to accept the views of Stieglitz and the avant-garde intellectuals around him, but embittered by some of the unwelcome or misguided attention she received, she grew wary and developed the view that “there are as many philosophies (I add ideas on ‘Art’) as there are temperaments.”

As a successful woman in a field dominated by men, she was almost inevitably a controversial figure and continues to inspire both boosters and detractors for secondary reasons such as gender.

Under the difficult intellectual conditions of the 1930s and 1940s, decades whose social and political traumas produced a deep disillusionment and turn inward in artistic circles (including toward Freud and psychoanalysis), it was also perhaps inevitable that an artist such as O’Keeffe would find means of expression obsessively at times bound up with her own physicality.

Her flower paintings--only a few of which are present at the AGO--have been interpreted in a sexualized manner and it is difficult not to see this sort of intimate imagery in a work like Grey Lines with Black, Blue and Yellow (1923). Objecting to such interpretations of her work, O’Keeffe countered, “The subject matter of a painting should never obscure its form and color; which are its real thematic contents.” Her reluctance to acknowledge these subjects in her own work parallels her attitudes to society generally, which she also found uncongenial. These formal preoccupations or claims suggest a retreat from a painful, difficult world. 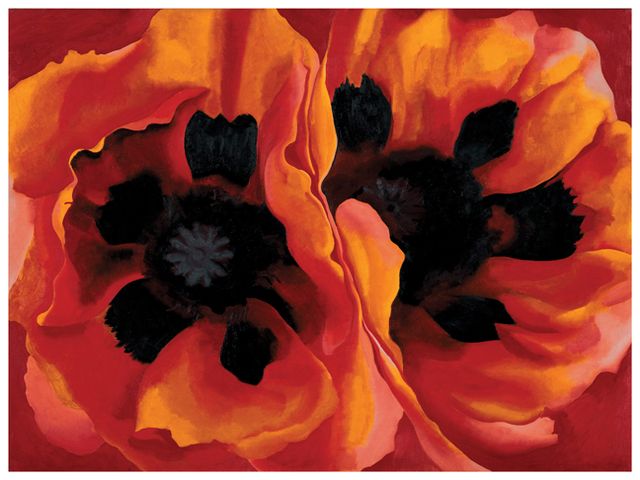 If O’Keeffe’s flower paintings, as she insisted, are devoid of sexual meaning, then however beautifully rendered, they are merely decorative. Either way, the concerns seem somewhat limited, given the convulsions of the century.

A fixation on O’Keeffe’s gender has undoubtedly obstructed an objective assessment of her work, but this is something that cuts both ways: on balance, it would seem that her art has been paid both too little and too much attention. One need not concur with the harsh assessment of art critic Clement Greenbergthat her work “amounted to little more than tinted photography” to agree that her merits have been inflated.

In any event, while the innovations of the cubists and futurists in the 1910s were shaking the art world in Europe and Russia, the inroads in abstraction that O’Keeffe was making when she came to public attention were still unusual in America. Much of the work she did around this time is indeed striking for its inventiveness, passion and audacity--qualities that distinguish a good deal of the successful abstract art of the period.

Works such as Early Abstraction (1915) and Special No. 9 (1915) are among the most successful in the exhibition, representative of the strength of her craft and imagination during this period. Her early paintings of New York City, a challenging subject for any artist, such as New York, Night (1928-1929), are especially evocative of the city and the time.

Reflecting an honesty and compassion evident in what I think is her best work, one of O’Keeffe’s sculptures, a small bronze figure simply titled Abstraction done in memoriam to her mother who died in 1916, is of special note in the AGO exhibition. Elegiac and somber, it is among the most memorable of her images. Here she demonstrated the creativity, heart and sincerity that set her apart.