The legacy of the Cassini spacecraft

The Cassini spacecraft has been one of the most productive, versatile and inspiring astronomical platforms ever made. Launched on October 15, 1997, this spacecraft, simply by its own exploits, stands as a triumph for a generation of scientists across the globe, and testament to humanity’s vast capacity for exploration far beyond Earth. Friday morning, after nearly 20 years of operation, including 13 years in the system of Saturn, its rings, and its icy moons, Cassini’s journey ended. 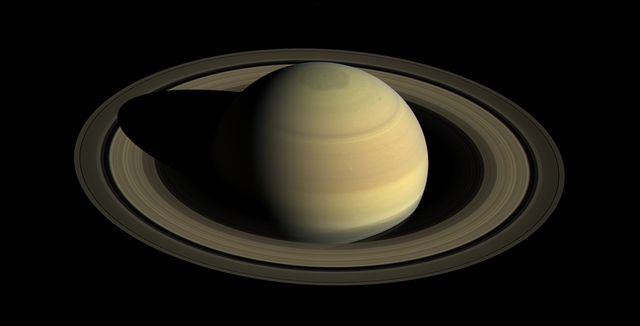 Cassini’s demise was as meticulously prepared as its life. As part of the planning for the spacecraft’s final mission extension in 2010, its controllers debated what to do when Cassini finally ran out of fuel. Two propellant systems were available to perform maneuvers at Saturn, but the bulk of the steering was accomplished by gently nudging the spacecraft towards various moons. Using minuscule adjustments in position, Cassini used a succession of gravity assists to change its orbit, allowing it to conserve its fuel and last more than three times its initial mission specifications.

But even with careful management, the fuel reserves would eventually be exhausted. Rather than leave an uncontrollable spacecraft in orbit and potentially contaminate one of the nearby moons biologically, it was decided that Cassini would end its mission by performing a risky series of 22 dives into Saturn’s rings, taking the spacecraft closer to the planet than it had ever been. On its final orbit, Cassini plunged into Saturn’s atmosphere, taking one last series of atmospheric measurements before becoming a part of the planet it had studied since 2004.

The spacecraft’s first major achievement upon reaching Saturn was the successful landing of the Huygens probe onto Saturn’s largest moon, Titan, the only soft landing ever conducted beyond the inner Solar System. The data provided by Huygens provided humanity’s first glimpse into a world shrouded by a dense nitrogen, methane and hydrogen atmosphere. 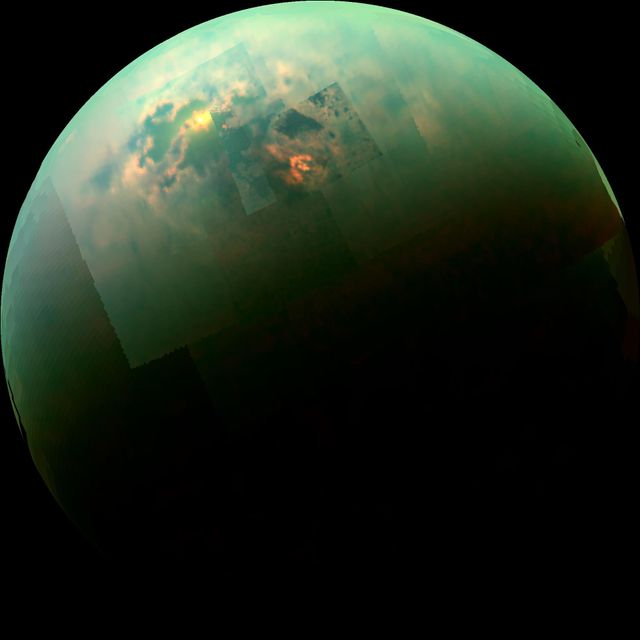 Titan was also studied extensively in 127 targeted encounters by Cassini, its infrared cameras and radar capable of piercing the thick clouds encircling the moon. The portrait that emerged was incredibly rich: Titan was revealed as the only body in the solar system supporting surface liquid, with active streams, rivers, and lakes punctuating the landscape, some of which have changed over the duration of the mission.

Cassini also discovered geyser-like plumes jetting from the moon Enceladus. Its dust analyzer found these plumes produced salt crystals with an “ocean-like” composition, suggesting a water origin. The last close flyby, in 2015, was targeted to pass directly through a plume, the risky maneuver that found molecular hydrogen, further evidence of a subsurface ocean with hydrothermal vents potentially capable of supporting life. 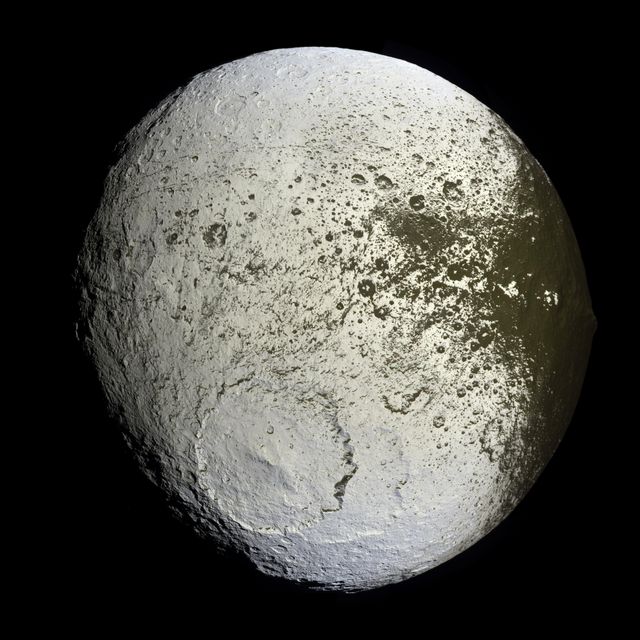 The moon Iapetus, known for centuries to have a bright side and a dark side, was imaged in great detail by Cassini. Images showed even the smallest craters puncturing the dark hemisphere, revealing underlying bright ice. Together with Earth-based observations, a consistent picture emerged of Iapetus accumulating spots of dark debris on its leading hemisphere billions of years ago, leading to a feedback mechanism where this darker area warmed and sublimated underlying ice, which accumulated in the now brilliant areas elsewhere on the moon.

Saturn’s rings, previously studied by the Pioneer and Voyager flybys, proved to have dynamics even richer than expected when imaged constantly over many years. Cassini discovered complex waves rippling through the ring systems and found new shepherding moons responsible for them. The “gap” in Saturn’s rings named after Cassini’s namesake was found to be littered with mile-sized boulders. A concentration of material in Saturn’s A ring, which may birth a new moon, was discovered in 2014, and final images of this region were recorded in Cassini’s last days. 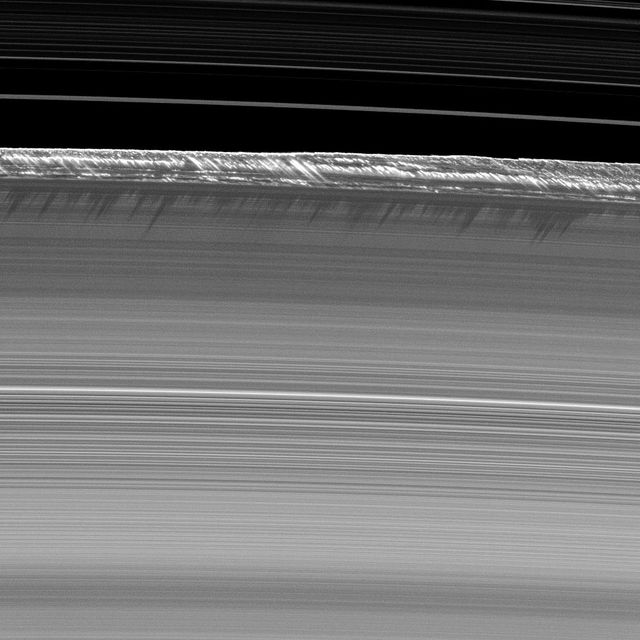 Cassini images large moonlets stacked up at the edge of the B ring, casting shadows on the smooth interior of the ring. Credit: NASA/JPL/SSI

Cassini even performed myriad experiments on its way to Saturn. It carried out studies of Venus, Earth, the Moon, asteroid 2685 Masursky and Jupiter. When Earth and Cassini were on opposite sides of the Sun, radio waves sent between mission control and the spacecraft were used to test Albert Einstein’s general theory of relativity by measuring the effect of the Sun’s gravity. Cassini’s measurements agreed with general relativity to one part in 51,000.

Even with the vast amounts of data collected by Cassini, many questions remain unanswered about Saturn and many new ones were raised by Cassini itself. The elementary length of a “day” at Saturn, based on rotation of its core, remains inexact. And the age and exact mass of the rings remains undetermined.

The technical challenges posed by an extended mission to Saturn needed 15 years of pre-launch planning and the combined resources of NASA, the European Space Agency, and the Italian Space Agency, 17 countries and thousands of scientific personnel to solve. Scientists at NASA who have spent their entire working lives on the mission—the initial work began in 1982—were visibly emotional on the final day of what one called “the perfect spacecraft.”

Cassini required mastery of technologies built over many decades to produce electrical power from radioactively-heated thermionic generators, to operate autonomously because of the two-hour delays in round-trip radio communications, to allow recovery, far beyond the reach of direct human intervention, from unexpected spacecraft anomalies, all the while serving as a stable platform from which its suite of complex scientific instruments could be pointed and the data collected relayed back to Earth. 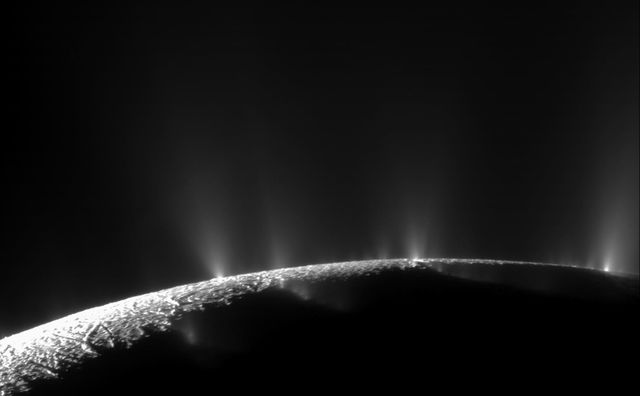 Cassini images salt-water geysers at the limb of Enceladus, emerging from cracks in the ice atop a subsurface ocean that may contain life. Credit: NASA/JPL/SSI

The Huygens lander represented a different set of challenges, not only to survive its high-speed deceleration to a soft landing on Titan, but to do so supported primarily by measurements made by Cassini itself, which had the additional duty of storing and relaying Huygens’ weak signal to Earth.

Despite Cassini’s success, no other major missions to the outer Solar System are being planned, nor are simpler missions to Saturn under active development. Only one other mission with comparable budget, the Mars rover Curiosity, has been launched in the last two decades. Cassini represents the last echoes of an epoch in which flagship-class missions of exploration beyond Mars were funded and launched.

And yet the technology available to enable such missions has vastly improved since Cassini was constructed. Moreover, the spacecraft has shown us just how much there is still to be learned in our stellar neighborhood. Mission concepts for exploration of the ice and potentially even the oceans lying under the surfaces of Saturn’s Enceladus and Jupiter’s Europa exist. They await an epoch in which the scientific aspirations of humankind can be fully given the material resources required to realize them.