“Dad, mom, the police are here”

ICE rounds up farmworkers applying for work in Michigan

All of the immigrants interviewed for this story requested pseudonyms for fear of deportation.

On the evening of Tuesday, September 19, a group of farmworkers sat outside on a used couch after a long day working in the orchards of Western Michigan. With blueberry season coming to an end, the men and women, mostly from Mexico, gathered to fill out applications for the upcoming apple harvest. Their children kicked up dirt with a soccer ball in the driveway of their temporary home. 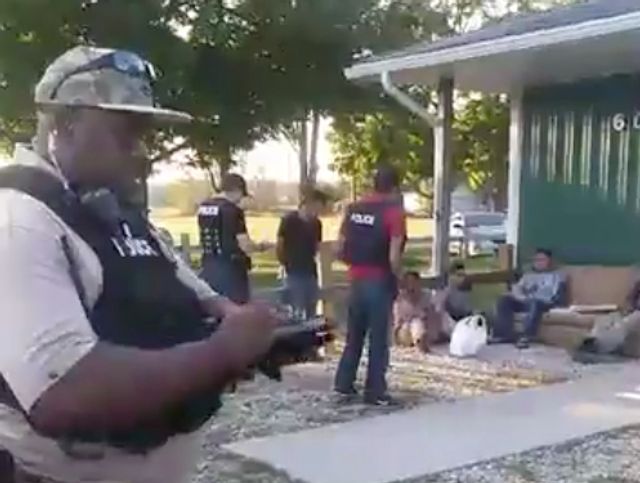 Similar scenes play out each evening across the hundreds of migrant labor camps that dot Western and Central Michigan. But as the workers relaxed at the Bakery Agricultural Labor Camp in New Era, a convoy of immigration agents was speeding down the tree-lined country roads to launch a planned operation at the camp. Minutes later, nine men and one woman were being sped in the opposite direction, some as far as Youngstown Ohio, for processing and deportation.

“Dad, mom, the police are here,” yelled a 10-year-old boy as he ran into the plywood apartment his family had been living in since June. Five unmarked cars and SUVs had just sped into the camp parking lot one-by-one. Out of uniform immigration officers began ordering the workers to line up against the wall.

When a World Socialist Web Site reporting team arrived days later, the inhabitants of the Bakery migrant camp were still in shock. Some had fled, fearing a second raid. The ground was littered with baseball caps, water bottles, work gloves, and kneepads left over from the roundup. 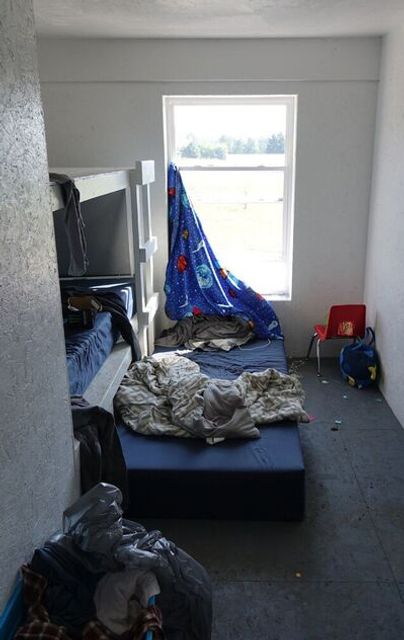 The boy’s mother, Juana, recalls the panic: “The police came and my husband went to the door. They told him, ‘come outside’ and forced him outside the door and arrested him.”

“When they came, they told me to stay inside,” she said. “They wouldn’t let me talk to my husband. Our boys were watching, and they were crying. So was I. Immigration came with their very ugly character. They were very aggressive.”

She fought back tears when she said she had only spoken to her husband once since he was taken to the Northeast Ohio Correctional Center. He told her on the phone how immigration officers had mocked them. “The racist officers started to make fun of him,” Juana said. “They told him he was a criminal and that our sons are criminals because we cut our boys’ hair ourselves, because they have buzz cuts.”

One migrant living in a nearby labor camp was present when the raid took place.

“Immigration didn’t have a warrant,” he said, “they just had a photo of some guy who used to live there, but they ended up arresting 10 people. They were waiting around the corner for them to come home from work. People were just relaxing out front after a long day.” 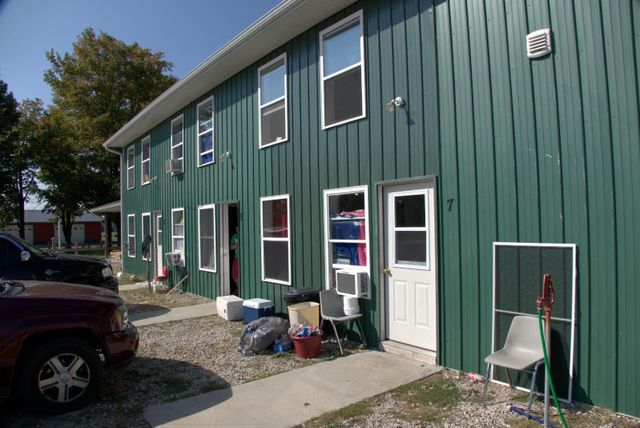 The raids produced shock and outrage among the neighbors of this rural town of 451 people, home to hillside orchards and a picturesque country bike trail that stretches to the shores of Lake Michigan a few miles away.

One neighbor, Elaina, grew up in New Era and has never seen a raid like this before. She saw immigration officials rush the migrant labor camp and watched the raid unfold from her yard.

“It’s pretty messed up that they come and do that. The people were just sitting there and cooperating. They’re calm, they just go to work and they’re hard workers. They get out really late and come home to relax.”

Another neighbor, Tammy, explained that her family spends their free time with the migrant workers, even though they are often only living in New Era for three to four months. “Everybody here, so far, we all get along, we’ve never had problems. If we have birthday parties for the kids, they’ll all come over and we have fun.”

Juana was grateful that her white and mixed-race neighbors gave her support. “The people who live around here are not racist to us,” Juana said, pointing at the surrounding country homes. “They are workers, too.”

Hiring hall at a factory farm in Shelby, Michigan

Juana’s next-door neighbor at the labor camp, Cristobal, invited the WSWS into his apartment where a smiling toddler played with a basket of apples. Upstairs, several of the arrestees had been living in hot, bare rooms, sleeping on slabs of wood covered with thin mattresses. These men, most in their early twenties, left behind belongings familiar to all young people: headphones, photos, energy drinks, cell phone chargers.

Cristobal walked out to his 20-year-old minivan and explained that his family is always on the move. Migrant children may spend a school year in five states. “We’ve been in Florida, North Carolina, New Jersey, Georgia, and now Michigan,” he said, “for blueberries and apples.” Miguel also spoke to the WSWS and said he makes $70 to $80 in a nine- or 10-hour day. “It costs about $500 each time we move to the next crop,” he added. Miguel also sends $400 per month to his family in central Mexico. 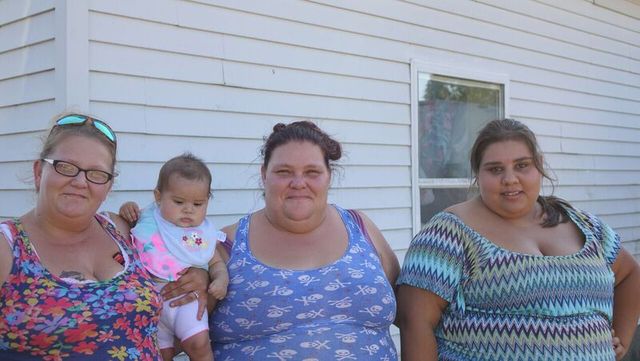 Those living near the migrant camp sympathized with the difficulty of the farmworkers. Stephany, who lives in a nearby home, referred to Immigration and Customs Enforcement when she said, “I have so much anger with these people. It’s ridiculous what they’re doing to the Mexicans. These poor people come here to work to send money back to their homes in Mexico where it is poor.”

She saw images of the earthquakes that hit Mexico City and Oaxaca, where some of the workers she knows are from. “Look at what’s happening to them now,” she said. “All it is, is a border. It’s just a line. The border is stupid, I don’t agree with it.”

Juana’s family comes from the impoverished south of Mexico that has been racked by multiple earthquakes in recent weeks. She hopes to save enough money to help her family. “The government here and the government in Mexico are the same,” she says, upset over the Mexican government’s failure to provide relief or adequate preparation from earthquakes. “They don’t do anything for us. They don’t help the poor. That’s why we came to the US in the first place.”

Stephany made a similar point referring to the American government. 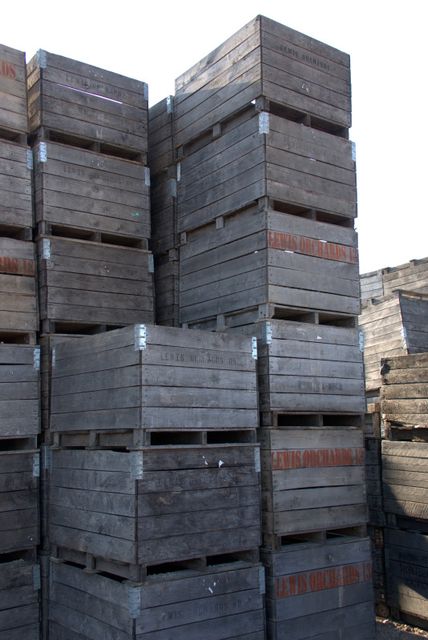 Fruit crates to be filled by immigrant farmworkers

Instead of “deporting, detaining or arresting the immigrants, you could do the roads, better hospitals, you could even do medication that people don’t qualify for insurance at a cheaper price. This is a very big problem around here. There’s a bunch of people that are sick and can’t afford to go to the hospital, or if they go they’re going to have bad credit and can’t afford to pay it. In my case, one of my medicines—insurance doesn’t cover it, it is $491. I can’t take it.”

“I think the money being spent ruining peoples’ lives could so help out the states like Texas, Florida—all the ones that just had a bad hurricane.”

According to figures from the US government and the American Action Fund, the government spends between $13,729 and $36,028 deporting each immigrant. Arresting a single immigrant costs between $4,856 and $27,155, depending on whether local police help. Detaining an immigrant costs an average of $5,400, while legal prosecution costs $1,495. The average cost of physical removal is $1,978 per immigrant.

The WSWS spoke with a third neighbor, Tammy, who said, “How the hell is Trump going to make America great again? If he would stop spending money sending all these Mexicans back … and actually take care of what he needs to take care of.”

Tammy explained that the billions of dollars used on deportation could be used to meet the needs of the working class.

She called for more spending on education, because “some schools don’t have the stuff that other schools do because they can’t afford it.” She said money was needed for social programs since there are many people “that really do need help with certain things.” She said young people should be able to go to college. “You got kids that would like to have that backup plan from the state helping them go to college, but there’s basically not enough money there because he’s spending all this money trying to send the Mexicans back.” 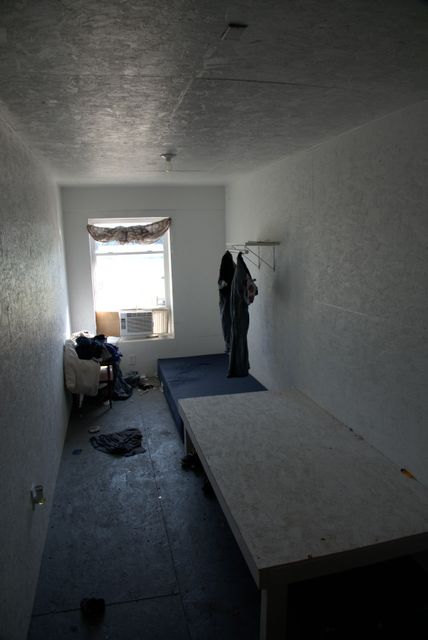 A migrant worker's room after deportation

Stephany said she wanted to explain why Americans must sympathize with immigrants. “We all have kids, we all have family,” she said, expressing anger with social media users who make racist comments against immigrants. “We do not choose to be born Hispanic, white, black, Chinese, Asian or anything. We are born because of our parents, we all have red blood. If we get cut our blood is red.”

And besides, she asked, “Why can’t we send immigration after Donald Trump?” Her friends broke out in laughter.

At the time of this writing, the migrants in New Era have received no word from their arrested coworkers and family. They cannot afford to pay attorneys and are relying on volunteer assistance from the Michigan Immigrant Rights Center. If Juana’s husband is lucky, a judge will find him eligible for bail, around $5,000, more than her family has saved after years working in the US. His sons are worried if he is deported it might be years until they see him again.