In a sweeping expansion of its moves to censor the Internet, Google has removed leading left-wing websites and journalists from its popular news aggregation platform, Google News.

At the time of publication, a search for “World Socialist Web Site” on news.google.com does not return a single article published on the WSWS. A search for the exact title of any of the articles published during that period likewise returns no results.

Over the past seven days, news.google.com has referred only 53 people to the World Socialist Web Site, a 92 percent decline from the weekly average of over 650 during the past year.

Pulitzer Prize-winning journalist and author Chris Hedges informed the WSWS Wednesday that his articles had ceased appearing on Google News. Hedges said the change occurred after the publication of his interview with the World Socialist Web Site in which he spoke out against Google’s censorship of left-wing sites.

“Sometime after I gave that interview, they blacklisted me,” said Hedges. “If you go into Google News and type my name, there are six stories, none of which have anything to do with me.” 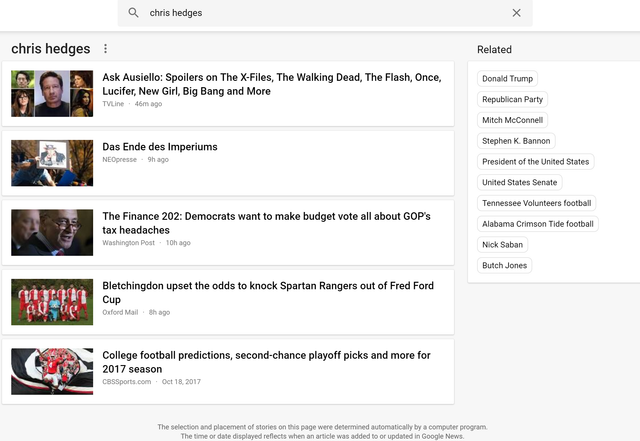 “I write constantly. Previously, Google News listed my columns for Truthdig and my contributions to Common Dreams and Alternet, as well as references to my books,” Hedges said. “But now it’s all gone. And I’m certain it’s because I spoke out against the Google censorship.”

The changes to Google News mark a new stage in a systematic campaign of censorship and blacklisting that has been underway at least since April, when Ben Gomes, the company’s VP of engineering, said Google was seeking to promote “authoritative” news outlets over “alternative” news sources.

Since then, thirteen leading left-wing web sites have had their search traffic from Google collapse by 55 percent, with the World Socialist Web Site having had its search traffic plunge by 74 percent.

“Just speaking as a journalist, it’s terrifying,” Hedges said. “Those people who still try and do journalism, they’re the ones getting hit; especially those journalists that attempt to grapple with issues of power and the corporate state.

“This shows not only how bankrupt the state is, but how frightened it is,” Hedges said.

“Google is developing ever more intensive methods of targeting, aimed at blocking any dissenting critical voices,” said David North, the chairperson of the International Editorial Board of the World Socialist Web Site.

“This is an unprecedented attack on free speech. In the history of the United States, censorship on this scale has never been imposed outside of wartime,” he added, pointing to the blocking of Trotskyist publications during World War II.

Hedges noted the precedent of political repression during World War I. “In the name of national security, for the duration of the war they shut down The Masses,” a left-wing, antiwar journal.

The intensification of Google’s crackdown on left-wing sites takes place against the backdrop of a sharp acceleration of the anti-Russian campaign led by congressional Democrats, together with sections of the Republican Party, the US intelligence agencies and leading news outlets.

On Thursday, Democratic Party senators Mark Warner and Amy Klobuchar introduced the first piece of legislation to come out of the campaign surrounding the claim that Russia sought to “meddle” in the 2016 election by “sowing divisions” within American society, an unproven conspiracy theory aimed at creating a justification for Internet censorship.

In his remarks announcing the bill, Warner made clear that his aim was to use it as the starting point for more aggressive restrictions on free speech on the Internet. “What we want to try to do is start with a light touch,” Warner said.

Commenting on the step-by-step nature of the censorship regime being created in the United States, Hedges said, “If you look at any totalitarian system, their assault on the press is incremental. So even in Nazi Germany, when Hitler took power, he would ban the Social Democrats’ publications for a week and then let them get back up. He wouldn’t go in and shut it all down at once.”

“Google is involved in an out-and-out political conspiracy, in coordination with the government,” North said. “A secret censorship program has been created that is directed against opponents of American foreign policy. This is an illegal assault on constitutionally protected rights.”

Hedges added, “I can tell you from having lived in and covered despotic regimes, I think we’ve got to ring all of the alarm bells while we still have the chance, because they’re not going to stop.”