David North, the chairman of the International Editorial Board of the World Socialist Web Site, delivered lectures this week on the significance of the Russian Revolution before large and enthusiastic audiences at the University of California, San Diego (UCSD) and San Diego State University (SDSU). 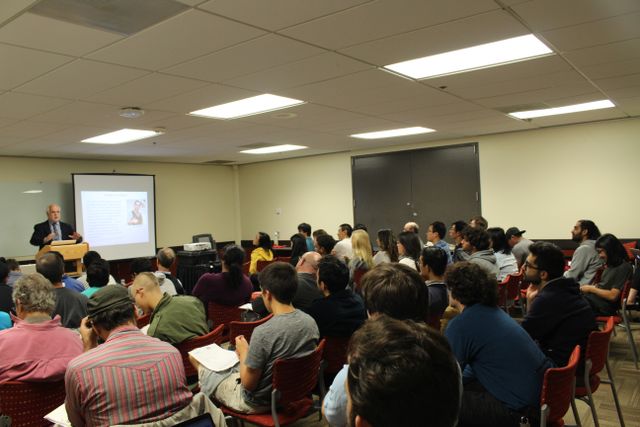 The lectures were sponsored by the International Youth and Students for Social Equality (IYSSE). They attracted an international audience of students, workers and intellectuals, with 60 people in attendance at UCSD and some 100 at SDSU.

At UCSD, North began his lecture by noting that the postmodernist philosopher and adherent of the Frankfurt School, Herbert Marcuse, had taught there. He compared the academic landscape of the 1960s and 1970s with that of today, contrasting the considerable esteem within academia for Marxism, historical truth and the October Revolution of the earlier period with the conservatism, historical falsification and outright anti-communism that are promoted on campuses in this period.

In the course of his remarks, North outlined the events that give rise to the Russian Revolution and explained why it was the most progressive event to date in world history. He noted the respectful attitude among serious historians and intellectuals a half-century ago toward the Soviet Union, which was seen as an alternative to capitalism and private property. He noted the marked difference in attitude reflected in the bulk of recent commentaries in the bourgeois press on the centenary of the Russian Revolution, which have resorted to lies and slander.

At the conclusion of his remarks, North stressed the rise of social inequality throughout the world since the dissolution of the USSR as well as the never-ending wars launched by US imperialism under the bogus banner of “the war on terror.” He asked his audience, “How many of you are concerned about another major war?” The vast majority of people in the packed lecture hall raised their hands.

Following the lecture, many important questions were raised, including on the nature of Stalinism, on “left-communism” and on the prospects for revolution in the United States. Many students and young people approached North after the meeting to thank him for his lecture. Informal discussion continued well after the meeting had concluded.

The strong attendance and lively discussion following the meeting have sparked increased interest in forming a chapter of the IYSSE at UCSD. Shrimant, a student at UCSD, told our reporters that the lecture was “certainly eye-opening,” adding, “We have these expectations that socialism is flawed, but there is a lot to be discovered and unearthed. I’m an international student and people are not that optimistic about how things are going to progress. I think people should be more politically involved and aware. There is a lot of propaganda about how socialism existed, but it is something I would like to learn more about.” 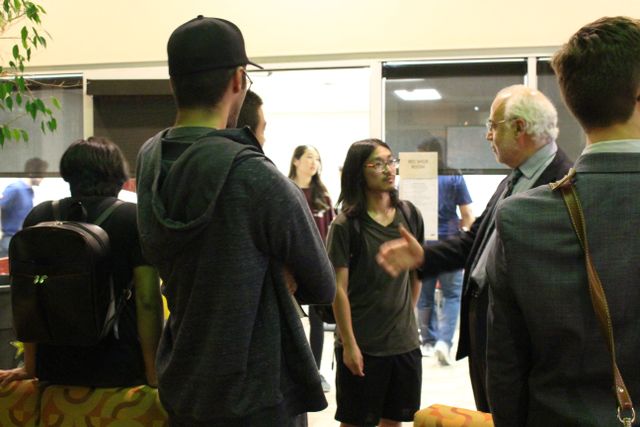 David North speaks to students after the meeting at UCSD

The following night, North spoke at a forum at San Diego State University on the centenary of the Russian Revolution alongside historian Rex Wade and SDSU Professor Mikhail Alexseev. Wade, professor emeritus at George Mason University, gave a factual account of the events leading to the Russian Revolution and noted the broad and democratic intervention of the masses into political life.

North followed with a presentation that also noted the broad support of the masses for the Bolshevik program and expanded on why the revolution holds lessons for the struggle against war and inequality today. The question-and-answer section of the meeting was very lively, featuring questions on the nature of the Putin regime, the evolution of the Soviet Union after 1917 and the role of Lenin in preparing the October insurrection.

Many of the students who stayed after the forum spoke with North and thanked him for his remarks. Nick, an undergraduate student, said, “I’ve been recently getting into socialism and the works of David North. It was a good time to come out and learn more.”

Joe, also a student, said, “The importance of the lecture in the context of today in undeniable. The reason why they were able to go from a bourgeois to a socialist revolution was because of a party that captured the popular imagination. If we don’t have a similar party today we can see a relapse into fascism.”

Melissa, an international relations major, said, “I think students and workers should listen to the program of David North. It is valuable information, and seeing so many students at the meeting shows people are willing to have an open ear.”

When asked about her thoughts on socialism, she said, “Socialism has become such a bad word for so many young people, but it only takes a little bit to realize that it isn’t so much so if you lend an ear to real politics. I have become interested in socialism because you see so much wealth inequality and now we have a president who wants to go to war. Finding an alternative perspective has been promising.”