Republicans unveil multitrillion-dollar tax cut for corporations and the rich

The Republican leadership of the House of Representatives released a tax bill Thursday that will give corporations and the rich in America trillions of dollars in tax cuts and starve the federal government of revenues, setting the stage for a frontal attack on core social programs such as Social Security and Medicare.

The Trump White House and congressional Republicans plan to rush the 429-page measure through Congress and have it signed into law by Christmas, using expedited procedures to evade a filibuster in the Senate and dispense with public hearings.

The bill amounts to a Wall Street wish list. Its centerpiece is an immediate cut in the corporate tax rate from 35 percent to 20 percent, which will save US corporations $2 trillion over the next ten years.

It also effectively reduces the tax rate on corporate income generated by overseas operations from 35 percent to 10 percent, allowing giant companies such as Apple and Amazon to repatriate the hundreds of billions of dollars they have stashed away overseas to avoid US taxes, by charging a one-time rate of 12 percent.

It maintains the top personal income tax rate of 39.6 percent (down from 70 percent in 1980), but applies it to households making more than $1 million a year, up from the current threshold of $500,000. It doubles the exemption for estate taxes to $11 million and eliminates the tax entirely in six years, providing a huge windfall for the wealthiest 0.2 percent of the population. By guaranteeing the ability of the financial aristocracy to pass on its wealth in full to succeeding generations, it effectively establishes a dynastic caste at the very top of society that recalls the feudal nobility of the Middle Ages. 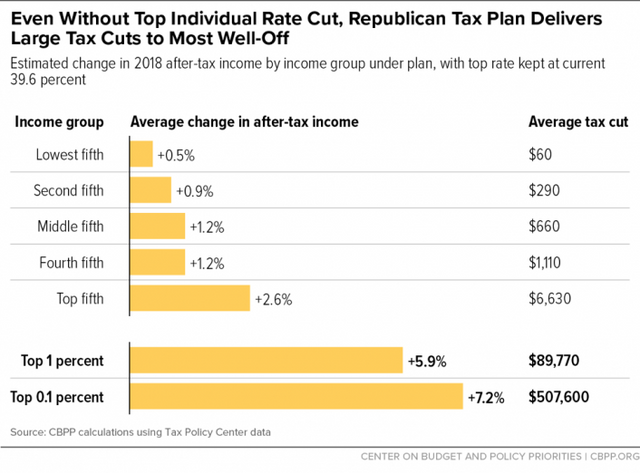 The bill eliminates the Alternative Minimum Tax, which almost exclusively impacts the wealthy, and reduces to 25 percent the tax on so-called “pass through” income reported by business owners.

The proposal roughly doubles the standard tax deduction for middle-income families. However, to keep the loss of federal revenue from handouts to corporations and the wealthy to $1.5 trillion over ten years, as required by the budget resolution passed last month, the measure repeals or reduces current tax deductions that chiefly benefit workers and middle-class people. These include deductions for mortgage interest payments, state and local taxes, student loans, medical expenses, moving costs, adoptions and tax credits for retired and disabled people.

As a result, millions of Americans will be forced to pay higher taxes to subsidize the theft of trillions of dollars by the financial oligarchy that controls both political parties and rules the country.

The tax bill represents an intensification of the social counterrevolution of the past four decades that has devastated the living standards of millions of workers while increasing social inequality and the wealth of the financial elite to unprecedented levels. It initiates a new stage in the plundering of society by the corporate oligarchy.

The nonpartisan Tax Policy Center analyzed the framework for the current bill released by the Republicans in September, which reduced the top personal income tax rate from 39.6 to 35 percent. It concluded that by 2027, low- and moderate-income families with children would receive little or no tax cuts, and many would see tax increases. It said 80 percent of benefits would go to the top 1 percent of households, while the bottom 80 percent of the population would get less than 13 percent of the tax cuts and their after-tax incomes would rise by less than half of one percent.

The Center on Budget and Policy Priorities, using Tax Policy Center data, concluded that even if the top tax rate remains at 39.6 percent, the top 1 percent, who make more than $733,000 a year, would see average tax cuts of $90,000 in 2018 and receive 45 percent of the total net tax cut.

Wall Street celebrated the bill with an 81-point surge in the Dow Jones Industrial Average, bringing the blue chip index to a new record high. The Dow has climbed by 25 percent since Trump’s election, building on the boom of the Obama years, when, on the basis of massive bank bailouts and wage cuts for auto and other workers, it more than tripled from its March 2009 low, in the aftermath of the 2008 financial crash.

Trump and the Republicans are trying to con the public with absurd and shameless lies, calling the bill a “tax cut for the middle class” that will “create jobs and raise wages.” At a White House photo op with House Speaker Paul Ryan, Ways and Means Committee Chairman Kevin Brady and other House Republicans, the billionaire speculator-turned-president hailed the bill as the biggest tax cut in US history. He and his congressional counterparts laughed and grinned, almost salivating over the prospect of pumping trillions more into the coffers of the rich and driving up their own stock portfolios in the process.

The tax package that eventually passes, whatever minor amendments are incorporated into the bill unveiled Thursday, will not create jobs or raise wages. It will no more benefit the working class than the tax cuts passed under Ronald Reagan and George W. Bush, with the support of the Democrats, or Obama’s multitrillion-dollar bank bailout. The additional money will go to more and bigger mansions, more private jets and private islands, more exclusive gated communities and similar obscene excesses, with a portion reserved for increasing the bribes to politicians of both parties.

As always, the Republicans are establishing the right-wing framework for new attacks on the working class and the Democrats are mounting a cynical show of opposition, while ensuring that the Republican proposals are enacted virtually intact. The biggest problems Trump faces in pushing the bill through come from dissident House Republicans from states such as New York and California that will be hardest hit by the removal of middle-class tax deductions, and from a group of fiscal hawks who object to the explosive growth of budget deficits and debt that will result from the measure.

Democratic House Minority Leader Nancy Pelosi and her Senate counterpart Charles Schumer held a joint press conference at which they denounced the bill as a handout to the rich. But the real position of the Democratic Party was spelled out by House Whip Steny Hoyer, who was interviewed on the CNBC business channel.

Asked if he and the Democrats supported a cut in corporate taxes, Hoyer said, “I agree on both lowering the corporate tax rate and finding a way to repatriate corporate dollars.” He noted that Obama had called for a corporate tax cut in a State of the Union address. The problem, he said, was that “the Republicans won’t agree to do this in a bipartisan manner.”

A number of Democrats from states that voted for Trump, including Senator Sherrod Brown of Ohio, a trade war “populist” close to the trade union bureaucracy, have met with Trump or publicly offered to discuss a common tax-cut plan. Others include Senator Joe Donnelly of Indiana, Jon Tester of Montana and Joe Manchin of West Virginia.