India’s 1-percent grabs nearly a quarter of all income

The corporate press around the world have long depicted India as a rising economic star whose population, or at least a sizeable portion of it, is benefiting from rapid capitalist growth. Hundreds of millions, or so we have been told, are on the cusp of “middle class” incomes.

A recent report from French economists Lucas Chancel and Thomas Piketty debunks this distorted and cynical picture, showing that the economic development of the past three decades has overwhelmingly benefited the top 10 percent and especially the top 1 percent of Indian income-earners.

Chancel and Piketty present their analysis in a 50-page report, Indian income inequality, 1922-2014: From British Raj to Billionaire Raj?, the updated version of which was released in September.

Using tax data, beginning with 1922, the year the colonial overlords of British India introduced an income tax, Chancel and Piketty show that income inequality is greater today than any time in the last century.

Meanwhile, the poorest 50 percent of Indians must make do with an income share of just 15 percent, eking out their existence on an average annual income of US $705.

The income data analyzed by the authors covers India’s adult population, defined as persons 20 years and older and estimated in 2014 to number about 780 million out of a total population of 1.26 billion. India it should be noted has the world’s largest number of child workers aged between 5 and 14 years of age.

According to the report, increasing inequality has been the defining characteristic of India’s “growth story” since the late 1980s, when Congress Party Prime Minister Rajiv Gandhi initiated a turn to “free-market,” “investor-friendly” policies.

But it is after 1991—when the Congress government of P.V. Narasimha Rao demonstratively broke with the state-led economic development strategy the Indian bourgeoisie had pursued since independence in 1947 and embraced a “new economic policy” aimed at transforming India into a cheap-labor haven for global capital—that income inequality truly surged.

Nothing illustrates more strikingly the extreme inequality of India’s income distribution than the preceding chart. It plots the average annual income for the different strata of the country’s adult-population in 2014. The figures are shown in both Indian rupees and in US dollars with the latter displayed in red.

Even the annual income of those in in the top 10 percent (some 77.8 million people) is less than $12,500, meaning the majority, while living in circumstances vastly superior to those of ordinary Indian workers and toilers, are far from wealthy. Any family calamity (loss of a job or illness) could soon plunge them into poverty.

The following table provides more details of the data from which the first graph was drawn.

Thus, for 90 to 95 percent of adult workers the situation can only be described as an unequal division of poverty, while for the bottom 50 percent the situation is nothing short of desperate.

At the other end of the spectrum, the concentration of income is correspondingly intense with the top 1 percent and especially the top 0.1 percent living a life of luxury.

The authors emphasize that income inequality actually decreased during the three decades starting from 1950.

Led by the Congress Party, the Indian bourgeoisie suppressed the mass anti-imperialist movement that convulsed South Asia during the first-half of the 20th Century, and agreed to a deal with the British in 1947 under which they took hold of the colonial state apparatus and the subcontinent was communally partitioned into an expressly Muslim Pakistan and a predominantly “Hindu” India.

However, the Congress did carry out some piecemeal reforms, such as liquidating the largest zamindari (feudal) landholdings in the interests of capitalist development, and in the face of militant worker struggles and social unrest was forced to make limited social-welfare provisions.

But by 1991, the bourgeoisie’s state-led development project, which aimed to promote Indian capitalism through import-substitution and widespread state ownership, had shipwrecked. Working in close concert with the IMF, the Indian elite began implementing neo-liberal policies—deregulation, privatization, tax cuts for big business and the rich, the rolling back of subsidies, slashing of public services, etc.—wholesale.

Since then, income inequality has risen exponentially, while the vast majority remain mired in poverty and face increased economic insecurity, due to the gutting of public and social services.

The following three charts display the contrasting trends from 1951 through the early1980s and the subsequent decades. 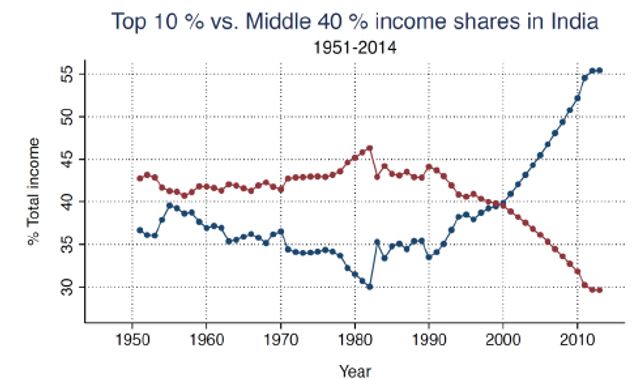 The first chart shows the collective income accruing to the “middle 40” rose to just over 45 percent by the early 1980s, while that of the top 10 percent declined from about 37 percent in 1951 to 30 percent. After 1990 the two trends reverse. The top 10 percent garnered more than 55 percent of all income in 2014, almost double its share in the early 1980s, while the middle 40 percent’s share fell to just over 30 percent. 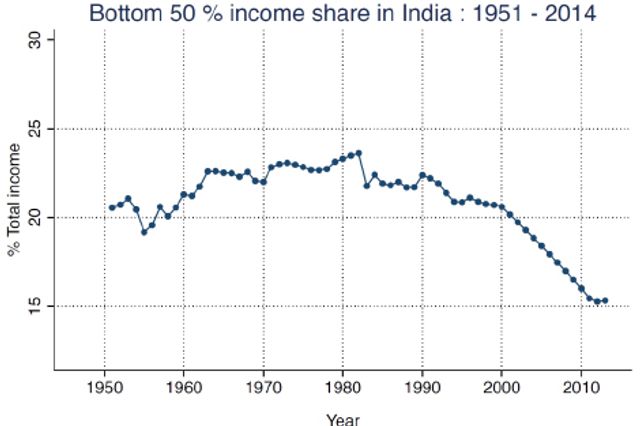 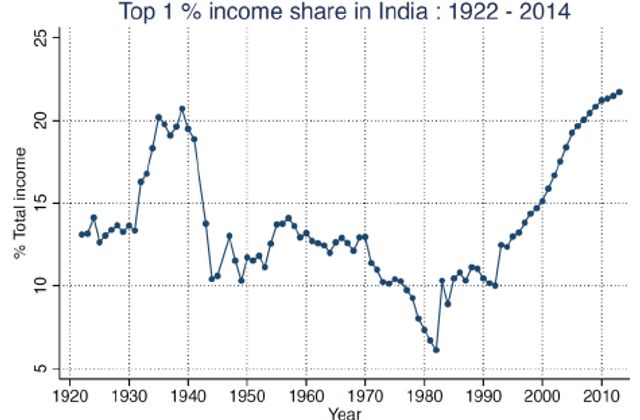 The third and final chart displays the income trend for the top 1 percent from 1922.

Chancel and Piketty summarize their chief conclusions as follows:

1. There was a marked decrease in inequality in the early forties.

2. There was a noticeable reduction in top income shares from 1950 to the early 1980s, but a significant increase from the mid-eighties onwards.

3. Income inequality in contemporary India is much higher than during the late pre-independence period and the highest in at least a century.

Then the authors make the following striking observation about the so-called Indian middle-class:

“This result should help us better characterize what has been termed as ‘the rise of India's middle class.’ From the perspective of our new income inequality dataset, “Shining India” corresponds to the top 10 percent of the population (approximately 80 million adult individuals in 2014) rather than the middle 40 percent. Relatively speaking, the shining decades for the middle 40 percent group corresponded to the 1951-1980 period, when this group captured a much higher share of total growth (49 percent) than it did over the past forty years. It is also important to stress that, since the early 1980s, growth has been highly unevenly distributed within the top 10 percent group.” [Emphasis added]

The gross social inequality and poverty documented in From British Raj to Billionaire Raj are a searing indictment of Indian capitalism and the entire political establishment, from Prime Minister Narendra Modi and his Hindu supremacist BJP to the twin Stalinist parliamentary parties, the Communist Party of India (Marxist) or CPM and the Communist Party of India or CPI.

The Stalinists have systematically suppressed the class struggle, dismissing socialism “as a far off cry,” while claiming that it is possible to pursue neo-liberal reform “with a human face.” From 1991 through 2008, the Stalinists supported a succession of Indian governments, most of them Congress-led, which implemented the bourgeoisie’s “new economic policy” and developed close ties to Washington. And in the states where they have held office, the CPM and CPI have imposed what they themselves call “pro-investor” policies, including banning strikes, slashing social spending, and using police and goon violence to suppress peasant opposition to the land expropriations for big business development projects.