An artist’s eye view of the Russian Revolution

An animated work about the most important event of the 20th century, the Russian Revolution, could have gone badly wrong. However, German writer and filmmaker Katrin Rothe’s 1917: The Real October is an interesting experiment.

Rothe, who has twice won the prestigious Grimme Award (for work in German television, in 2014 and 2017), wanted to know how artists responded to the tumultuous events a century ago. 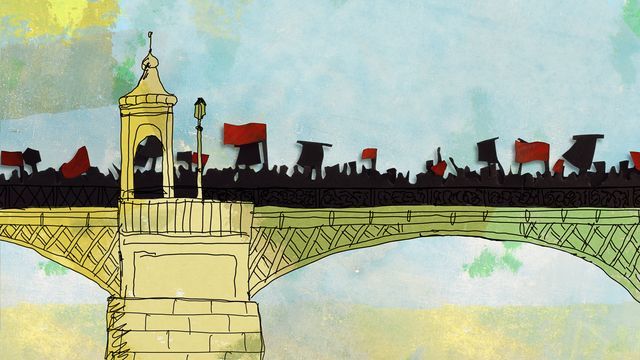 To this end, she read various historical studies, but she was impressed most of all by a work including several eye-witness accounts. This gave the filmmaker the idea of presenting the events of February to October 1917 in Russia from the subjective standpoint of a number of artists, while supplementing this with documentary footage from the great Herman Axelbank documentary, Tsar to Lenin (1937).

The revolutionary developments are documented by the artist (voiced by Inka Friedrich) in her studio as she cuts out figures and places them on a timeline on the wall, painted in red, and comments on them. The most important events are introduced with clips from Tsar to Lenin, photos and cardboard signs. For example, poet Vladimir Mayakovsky’s denunciation of high society is underscored by film images of Tsar Nicholas II and his family.

In the imagery, Rothe repeatedly draws on the terse and expressive iconography of the revolution (and post-revolutionary period). In the film her Mayakovsky cites the comment by the anarchist newspaper Russkaya Volnya on March 18, 1917: “If you want your placards and banners to attract more attention, then ask the artists for help.” Many of them, including the poet, were willing to provide it. 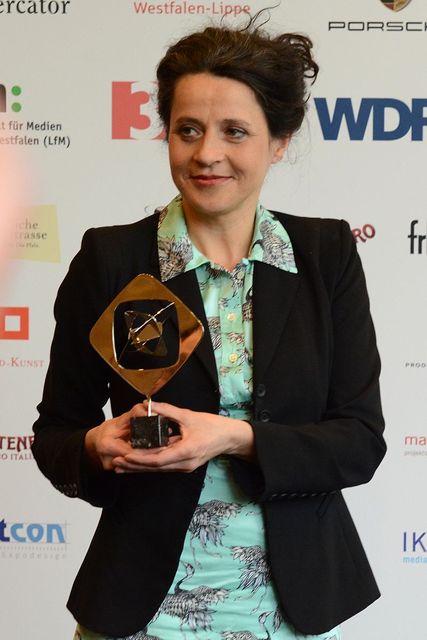 The scenes of the masses are impressively effective, especially the mass funeral for the victims of the February Revolution with its red coffins. In the words of Alexandre Benois, one of her protagonists, “The purest Breughel.”

From February to October, the five artists adopt sharply differing attitudes to the ever intensifying struggle for power between the masses and the provisional government.

Gippius, the wife of famed writer Dmitry Merezhkovsky, who lives comfortably opposite the seat of government in the Tauride Palace, observes the mass movement with increased hostility after her initial hopes of a bourgeois democracy in Russia appear less and less likely to be realised.

Gippius is skeptical from the outset. A friend of Alexander Kerensky, she becomes disappointed by his political failures. She represents the bourgeois and petty bourgeois circles who initially welcome the collapse of the autocracy and old society, while simultaneously fearing its consequences.

The poet defines her attitude to the war, “I am for the war. For its quickest possible and dignified end.” Over the course of the months, Gippius’s comments, especially in regard to the Bolsheviks, become ever more venomous. 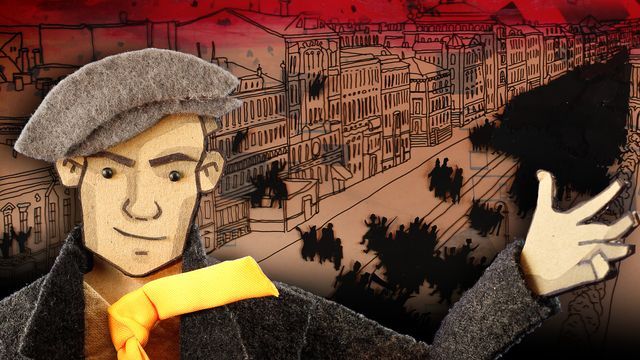 In Literature and Revolution (1924), Trotsky draws a biting portrait of the poet, which provides a necessary corrective to the figure in the film, who is portrayed in a rather favorable manner. Trotsky cites one of her verses, “And swiftly you will be driven to the old stable with a club, o people, disrespectful of holy things,” and remarks, “What an inimitable slice of life is this effort of the decadent mystic poetess to wield a club (in iambics!)”

In regard to another passage, in which Gippius threatens the people with her “whips,” Trotsky comments that “one can see her nature quite clearly. Only yesterday she was a Petrograd lady, languid, decorated with talents, liberal, modern. Suddenly today, this lady, so full of her own subtleties, sees the black outrageous ingratitude on the part of the mob ‘in nailed boots,’ and, offended in her holy of holies, transforms her impotent rage into a shrill womanish squeak (in iambics). And indeed, if her squeak will not shatter hearts, it will arouse interest. A hundred years hence the historian of the Russian Revolution will perhaps point out how a nailed boot stepped on the lyrical little toe of a Petrograd lady, who immediately showed the real property-owning witch under her decadent-mystic-erotic Christian covering.”

It is no accident that later, exiled in Paris, this delicate lady placed all her hopes in Hitler’s Third Reich.

Gorky, who always refers to himself as a socialist (although he was never a Marxist, as Rothe asserts), is increasingly unsettled by the mass movement in 1917 and fears the worst. His traumatic experience during the failed revolution of 1905, in which he was a participant, leads him to dark thoughts, “A lot of blood will flow, an endless amount.”

Gorky intervenes when he sees art and culture under threat and founds a working group to defend monuments. The artists are divided among themselves, but agree on a resolution calling for the “saving of culture” and present the latter to the provisional government, which graciously accepts it. A commission on culture is founded. Troubled by the situation and dissatisfied by the government and its determination to prosecute the Russian war effort, Gorky launches a newspaper Novaya Zhizn (New Life) and wants to set up his own party, which he believes may only have three members.

The Bolshevik and literary critic Aleksandr Voronsky later characterised Gorky like this: “Man’s thought is majestic, free and fearless, but with us in Russia, it is separated and torn away from the original instincts of life. The writer [Gorky] sees in this rift between thinking and feeling the tragedy of our revolution. During the revolution, it emerged that the principle of ‘reason’—the intelligentsia—ended up outside of ‘the element of the people’.” And Gorky, notwithstanding his proletarian origins, belongs, as Rothe’s 1917: The Real October makes clear, to the intelligentsia. 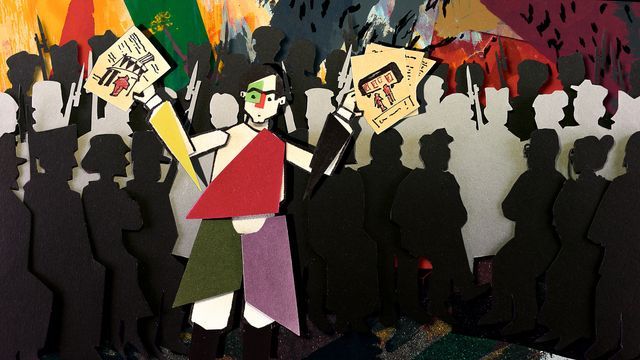 Mayakovsky, who is spared from going to the front during World War I thanks to Gorky’s intercession and is stationed instead in Petrograd, is the most impassioned figure in the film.

He not only shows up everywhere guns are being fired, but appears during the first days of the February Revolution to author a “poetical timeline” of events. Mayakovsky ardently hopes for the seizure of power by the Bolsheviks, visits the workers and reads them his poems. He founds an all-Russian artists’ council and earns money by drawing for newspapers. He cites his two-line satirical verse, “Eat your pineapples, chew your quail’s eggs / Be warned, bourgeois, you’re on your last legs,” with which the film also concludes.

The out-and-out bourgeois Benois, by contrast, is only fleetingly touched by the revolutionary tumult. He keeps his distance, and is concerned by the fate of the Winter Palace and the Hermitage with its artistic treasures. After the seizure of power by the workers and peasants, he is astonished at the lack of damage caused during the overturn.

Benois (who went into exile in 1927 and died in Paris in 1960) increasingly regrets having become involved in the revolution. Resigned, he retreats into isolation. He expresses a complete lack of understanding and sympathy for the needs of the working class. His cook, who has to wait in line for food for hours and can hardly put a meal on the table, is a “really silly goose.” She makes “repeated demands, such as having Sundays free and the like.”

Malevich, the creator of the “Black Square” (1915), becomes an enthusiastic supporter of the revolution because he sees it as a rebirth of art. He proposes that artists organise museum visits for workers and establish “city halls of art.” With art, he wants to come to the aid of the younger generation, which carry the “spark of the new,” across the country.

Katrin Rothe explained her notion of the relevance of the film in an interview: “It is a film that looks at the past from today. Artists do not make revolutions, they have no weapons and are not politicians. But they are significant participants in something, which can be described as the ‘general mood’. They cannot control what emerges from this, but they can either assume this responsibility or not.”

Rothe’s summary is: “Art experienced an awakening after 1917, but the sought after freedom was only a brief illusion.” This perhaps applies to the personal fates of many individual artists, but what the Soviet and Russian artists created and experimented with in the few years before their suppression by the Stalinist bureaucracy continues to have an impact to this day and continues to provide contemporary artists with an impulse to develop their work.

The director ends her work with the pessimistic conclusion, “I experienced the end of socialism in 1989. I wanted to find the true October, I have found hundreds of truths. What is left? Words and works.”

What the director, born in 1972, experienced was the collapse of the Stalinist regime, the gravedigger of the revolution, and not socialism. Her film itself, the fact that she took up this subject, is proof that the ideas and challenge of the Russian Revolution, and the answer it gave to war and exploitation, are posed once again today.