Roman J. Israel, Esq.: Rebel with a cause

Written and directed by Dan Gilroy

Dan Gilroy, writer-director of Nightcrawler (2014)—about a ruthless, amoral crime photographer—and now the legal drama Roman J. Israel, Esq., has something to say about contemporary society: “[We] have entered a time of hyper-capitalism, and for me it’s sort of the law of the jungle.

“I think if you are weak in any way in today’s world,” the filmmaker told an interviewer, “you’re at a disadvantage just on every level, [from] health insurance to employment to housing, to just quality of life … I think there’s a tremendous number of really greedy, rapacious people, who have amassed this staggering amount of wealth. It almost feels like, to me, [the period] before the French Revolution. I believe, unfortunately, we do live in times where the value of human life and the human spirit is utterly marginalized.”

Gilroy explained that he tried “to inject some of my worldview” into the new movie. Indeed, with Roman J. Israel, Esq., he has succeeded in crafting a work that expounds on his concerns.

The film begins with lawyer Roman J. Israel, Esq. (Denzel Washington) writing a brief in which he is both the plaintiff and the defendant. It makes a case for him to be disbarred and essentially excised from the human race. The movie then jumps back three weeks to trace out how he has arrived at this point in his life. 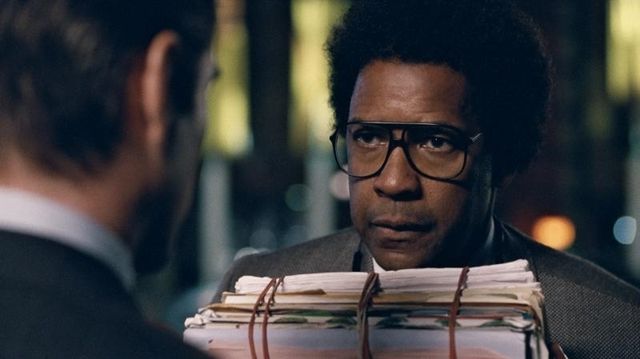 The overweight, awkward (perhaps slightly autistic) and disheveled Roman has for the past 26 years been writing the briefs in the two-person Los Angeles law office of William Henry “The Bulldog” Jackson—with Jackson its courtroom face. (The latter was “great in the seat and great on his feet.”)

When Jackson suffers a lethal heart attack, his family wants to close the bankrupt firm that specialized in pro bono work. The slick George Pierce (Colin Farrell) is brought in to wind things down. George pegs Roman as a legal savant—he has memorized the entire California legal code—and sees him as a valuable asset. But Roman believes in the law as a force for good and cannot reconcile his principles with a firm that charges $2,500 per hour. 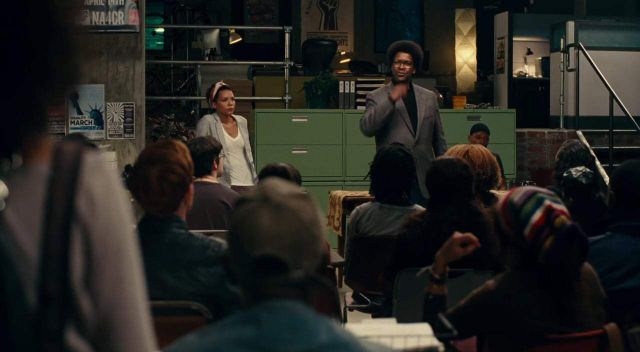 Roman is a holdover from another time. He lives in a dump whose walls are decorated with posters of Angela Davis and Bayard Rustin, political and civil rights activists from the 1960s and 1970s protest period. He does not own a car and makes his way across Los Angeles by foot or public transportation, plugged into earphones that play vintage soul music. Roman uses the suffix “Esquire” to indicate that he believes he is “above a gentleman, but below a knight.” He is also a legal crusader, having worked for decades on a massive brief that, when finished, will advocate for significant law reform.

Unable to find meaningful employment, including with a non-profit organization run by the sympathetic civil rights activist Maya (Carmen Ejogo), he reluctantly goes to work for George. Sick at heart, he attempts to rectify his situation by using privileged information from one of the firm’s clients to illegally obtain $100,000 in reward money.

For a short time, Roman enjoys the trappings of success, until the scheme blows up—around the time that Roman can no longer live with himself.

Roman J. Israel, Esq. is an unusual film. It attempts to re-ignite the spirit of a time when “everybody [was] fighting and challenging civil rights laws, fighting for women’s rights, anti-war protests,” according to Gilroy. “Roman’s devotion to legal reform, while historical in its inspiration, is undoubtedly still relevant in today’s world.”

Washington is outstanding and thoroughly believable as the lumbering, gauche Roman. Farrell is a worthy match as the fast-talking shark with something of a conscience. Although the motives for Roman’s eventual extra-legal maneuver are not entirely credible, Gilroy’s aim was to investigate the toll exacted by a 40-year commitment to ideals that are “bigger than yourself.” Moreover, Roman’s brush with a couple of nasty feminists at Maya’s center, in which he lands on the ideological high ground, is insightful and runs counter to the noxious atmosphere of identity politics. 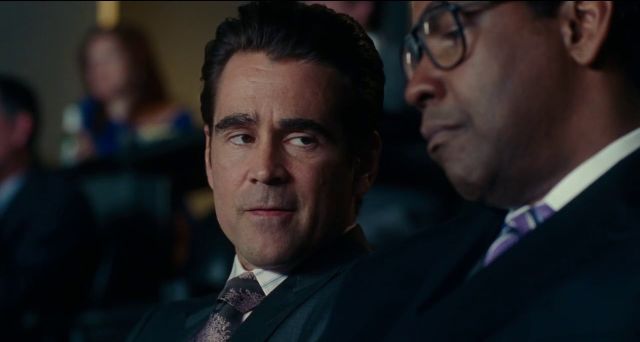 In Roman J. Israel, Esq., Gilroy pins a gold star on those who didn’t make their peace with the system as the protest movement ebbed. Roman, the filmmaker says, is still interested in basic rights for everyone, “regardless of color, regardless of socioeconomic status, regardless of gender. He wants judicial equality and parity and judicial fairness—across the board … for ‘let’s stick to the Constitution, let’s stick to the Amendments.’”

In the movie, Pierce introduces Roman to his firm by saying, “He’s come to put social revolution squarely on the agenda.” Gilroy no doubt has a different understanding of the phrase than we do (nor are we admirers of Davis and Rustin), but it’s nonetheless a worthy and uncommon sentiment.

Gilroy’s father, Frank D. Gilroy, was a playwright best known for The Subject Was Roses (1964), which featured a youthful Martin Sheen as a World War II veteran in a family beset by painful, subterranean emotional difficulties. The drama was later made into a film, directed by Ulu Grosbard. Frank Gilroy also wrote extensively for television, during the heyday of such shows as Playhouse 90, Westinghouse Studio One and others.

Tony Gilroy, Dan Gilroy’s brother, is a screenwriter and filmmaker, who wrote and directed the valuable Michael Clayton (2007).

The preoccupations here seem to be with social and personal honesty and opposition to corruption and the arrogance and imperiousness of the wealthy. It’s not the final word in filmmaking, but it’s intelligent and relatively complex work.

In Roman J. Israel, the dilemma of the independent-minded Israel evokes the condition of many conscientious individuals in various fields today, including the film industry. Gilroy must surely be commenting on the current reality in Hollywood, where giant conglomerates attempt to control or smother any oppositional projects.

Gilroy, both in Nightcrawler and Roman J. Israel, Esq., explores the moral and creative dimensions and consequences of being trapped in a world that has been reduced, as he puts it, to “transactions,” between people. It’s a world in which the rich prey upon the poor—an era similar, as he suggests, to that just prior to the French Revolution.