Top US official warns “not much time” to prevent Korean war

US National Security Adviser H.R. McMaster warned on Saturday that time was running out for any peaceful resolution of the tense confrontation with North Korea over its nuclear and missile programs.

Describing North Korea as “the greatest immediate threat to the United States,” McMaster declared: “I think it’s increasing every day, which means that we are in a race, really, we are in a race to be able to solve this problem.”

Referring to North Korean leader Kim Jong-un, the national security adviser said: “Every time he conducts a missile launch and nuclear test, he gets better.”

McMaster was speaking at the Reagan National Defense Forum in California following North Korea’s test firing of an intercontinental ballistic missile (ICBM) last week that might have the capacity to reach the continental United States. 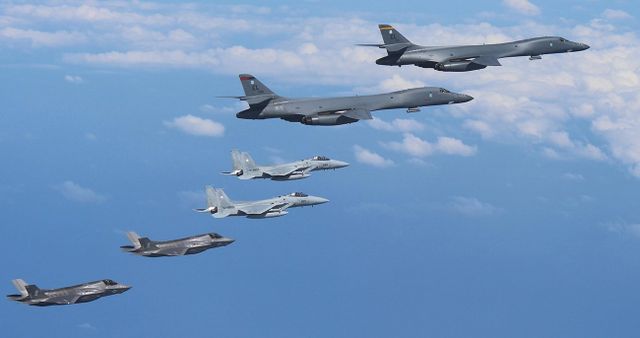 In reality, Trump administration officials are grossly inflating North Korea’s nuclear capabilities in order to justify military aggression against the Pyongyang regime. The range of the latest missile that was tested is in doubt because its payload, and therefore its capacity to carry a nuclear warhead, is not known. Moreover, it broke up in flight, indicating that North Korea does not yet possess a viable re-entry vehicle.

President Donald Trump’s administration has repeatedly declared that “all options are on the table”—that is, including a massive military attack. At the UN Security Council last week, US ambassador to the UN, Nikki Haley threatened that “if war comes, make no mistake, the North Korean regime will be utterly destroyed.”

The US is starting another major joint military exercise with South Korea today, involving some 230 aircraft and 12,000 personnel in a barely disguised rehearsal for war against North Korea. The show of force includes six US F-22 Raptors—the most advanced stealth fighters that would be used in the first wave of any attack on North Korea.

A South Korean defence official told CNN the US was sending dozens of high-end fighters, bombers and support aircraft to participate in the week-long Vigilant Ace 18 air combat exercise. These include six F-22s, six F-35s and six EA-18Gs, as well as more than 10 F-15Cs and F-16s. They will be joined by B-1 strategic bombers and more F-35s.

The Pentagon is also bolstering its anti-missile and warning systems in preparation for war. Two US congressmen—Mike Rogers and Adam Smith—said on Saturday the Missile Defense Agency (MDA) was investigating locations on the US west coast for the installation of Terminal High Altitude Area Defence (THAAD) batteries. Longer-range Ground-based Midcourse Defense (GMD) interceptors are already installed in Alaska and California.

In another indication that the US is being placed on a war footing, authorities in Hawaii have reinstated monthly nuclear attack warning tests. The Attack Warning Tone was sounded last Friday for the first time since the end of the Cold War.

Pyongyang has condemned the US-South Korean air drills. A commentary in the official Rodong Sinmun on Sunday branded the war games “an open, all-out provocation” against North Korea, “which may lead to a nuclear war any moment.”

The US has boxed North Korea into a corner, imposing crippling economic sanctions on the regime and threatening war unless it capitulates to Washington’s demands to destroy its nuclear arsenal and dismantle its nuclear and missile programs. Pyongyang is well aware of the deadly fate of the Iraqi and Libyan leaders—Saddam Hussein and Muammar Gaddafi—who gave in to US pressure over so-called weapons of mass destruction.

The Trump administration is recklessly placing Asia and the world on the brink of nuclear war. North Korea is never going to be in a position to match the world’s most powerful military or the thousands of warheads in the US nuclear arsenal. Faced with repeated US war games close to its borders, North Korean generals could conclude that they have to strike first to prevent being wiped out.

Warnings from Washington that time is running out only heighten the danger of war, whether by design or accident.

McMaster declared on Saturday: “There are ways to address this problem short of armed conflict, but it is a race because he [Kim Jong-un] is getting closer and closer, and there’s not much time left.”

However, McMaster’s “peaceful” solution involves nothing less than a total economic blockade of North Korea—an act of war that could precipitate desperate actions by Pyongyang. He called for “much more severe sanctions” and the “complete enforcement of the sanctions that are in place.”

The sanctions already in place include bans on almost all North Korean exports and on a significant proportion of its imports, as well as on finance and investment. The US is now demanding that China cut off all energy supplies to North Korea—a move that would provoke an immediate economic and political crisis in Pyongyang.

McMaster said China should take unilateral action to cut off North Korean oil imports, adding, “you can’t shoot a missile without fuel.” He said both he and Trump felt that a 100 percent oil embargo would “be appropriate at this point.”

Faced with the prospect of a war on its northern border, the Chinese government has reluctantly acceded to previous US demands for sanctions. However, Beijing is hostile to measures that could lead to an implosion in Pyongyang that Washington could exploit to install a pro-US regime on China’s doorstep.

The escalating US confrontation with North Korea is part and parcel of a far broader American strategy, which began with the Obama administration’s “pivot to Asia,” to undermine China economically and strategically.

The danger of war is compounded by the intense political infighting in Washington and the acute crisis of the Trump administration, amid rising popular resentment and opposition to social inequality. Besieged on all sides, Trump could conclude that the least worst option is to launch a catastrophic war to divert immense social and political tensions outward against an external foe.