Thousands of mainly young people protested over the weekend in Hanover, Germany against the right-wing extremist Alternative for Germany (AfD) as it held its first party congress since gaining seats in parliament in September’s federal election. While police estimated the number of demonstrators at 6,500, organisers put the crowd at over 10,000.

The police secured the meeting place for the party congress with a major deployment of forces. Armed cops in full combat gear, at least eight water canons and armoured vehicles—“special operations vehicles” as the police refer to them—protected the Hanoveraner Congress Centre and lined the demonstration route.

Protesters sought to block access roads to the congress centre on Saturday morning. Police responded to the sit-down blockades with baton charges and pepper spray, and by deploying water cannon in freezing temperatures. According to media reports, a demonstrator suffered a broken leg and had to be operated on in hospital. Officers arrested four people and took six into custody. 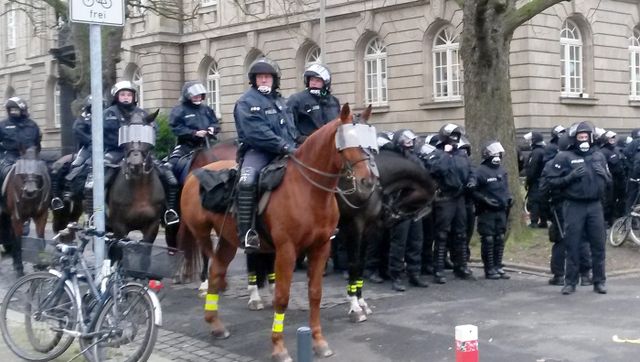 Police mobilisation in a side street

The blockades caused problems on Saturday morning for the AfD delegates seeking to gain access to the congress centre, which was surrounded by barbed wire. This resulted in the start of the congress being delayed.

The protests were called by a broad coalition of churches, trade unions, campaign groups and political parties under the slogan “Our Hanover: diverse and in solidarity! Protest against right-wing extremism and right-wing populism!” On Saturday afternoon, a protest march proceeded from the location of the AfD’s congress to the centre of Hanover, the state capital of Lower Saxony. The demonstration and the small rally which followed in the city centre remained peaceful, notwithstanding the militarised police units that surrounded the demonstration.

The Social Democrats, Greens, Left Party and the trade unions mobilised their youth organisations. The Left Party and some of the unions had their own vehicles with loudspeakers on the march.

The Sozialistische Gleichheitspartei (SGP) and its youth and student organisation IYSSE distributed a leaflet pointing to the responsibility of the established parties for the rise of the AfD.

“During the election campaign, all of the parties, from the conservative CDU/CSU to the Left Party, agitated against refugees and advocated a massive build-up of the police and state apparatus,” the leaflet stated. “Now they are integrating the AfD into government policymaking. In the Bundestag (parliament), they have created a so-called grand committee, which includes representatives of all parties, from the Left Party to the AfD. The Social Democrat German President Frank-Walter Steinmeier and the media hail AfD leader Alexander Gauland, who called during the election campaign for a positive evaluation of Hitler’s Wehrmacht.” 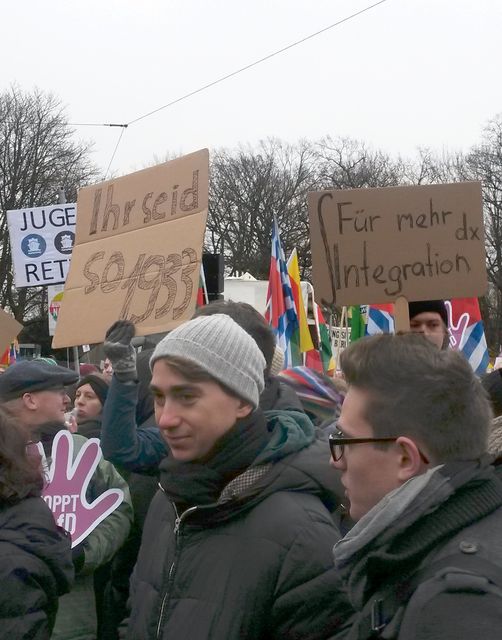 Participants in the demonstration

Many youth and students who participated in the demonstration were aware of the established parties’ responsibility for the strengthening of the AfD.

Sina, Birte and Ole are studying philosophy in Hanover. Sina said on the history of the AfD: “Emerging initially as an anti-euro party, based on privileged economists, the AfD had nothing in common with the people, which now always serves as the justification of their policies.” The extreme right-wing forces have overrun the party and are making use of it, Sina continued.

She thought that more money has to be invested into education so as to explain the danger posed by the far-right, and in social spending, so as to counterpose something to the right wing. “Otherwise, those who feel that the established parties are not listening to them will continue to vote AfD,” she said.

Birte added that this was precisely the problem. “The major parties make the poor feel as though they are not being listened to,” she said.

Ole thought the rise of the far-right was a social and political problem. “That’s why I’m here today, to show my presence,” he said. “I don’t think much of the idea of preventing the AfD congress. That will not resolve the problem.”

All three reported that protests against neo-Nazis and right-wing forces are widespread. “Among students, the sentiment in opposition to the right wing, in opposition to cuts, etc., is strong,” said Sina. However, she acknowledged, “That is less true among academics.” 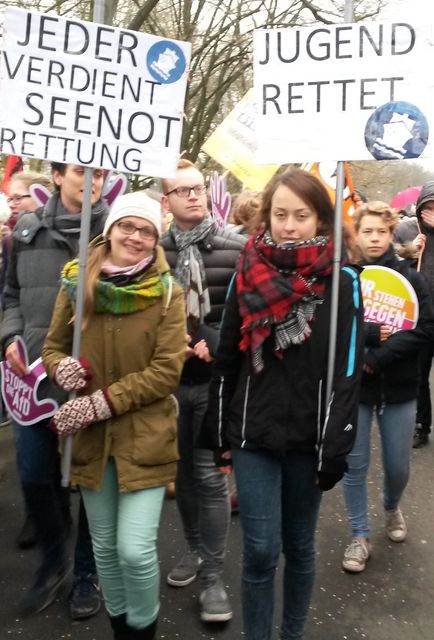 Maria and Lina are members of the organisation Youth Rescue which until recently had its own boat in the Mediterranean, the Juventa, which had rescued some 14,000 refugees. The boat was seized by the Italian navy in early August because the organisation refused to sign the Italian government’s “code of conduct”. The code not only contradicted the international law of the sea, but also demanded that armed police and border officials be allowed to board the ship.

Maria found it very sad that the far-right are once again showing themselves so openly. “We cannot allow them to be seen and recognised as entirely normal,” she said. “They are right-wingers. But all parties treat them as if they were normal. According to the maxim: ‘So they are further to the right than the CDU/CSU, but that’s fine.’” She has heard that many people have now applied for jobs with the AfD parliamentary group. “They say it is just a job like any other. But it isn’t. I see the treating of right-wing forces as fully normal to be a real danger.”

Lina thought social cutbacks, particularly in eastern Germany, were among the main reasons for the rise of the right-wing. The AfD is now exploiting this. “Now it is not just Nazis with shaved heads and jackboots, but members of the establishment in suit and tie who say, ‘I’m not a Nazi but …’ and then start spreading their right-wing propaganda. That is a real danger.”