New evacuations were ordered for several coastal communities and at least one dead body has been found as a result of the flames in the mountain community of Ojai.

The fire in the Los Angeles suburb of Sylmar known as the Creek Fire has now consumed more than 12,600 acres with the blaze only 10 percent contained as of Thursday morning. Fifteen structures have now been destroyed by that fire with another 15 damaged and 2,500 other structures still threatened. An estimated 110,000 people had to be evacuated in the area according to Los Angeles Fire Captain Branden Silverman. 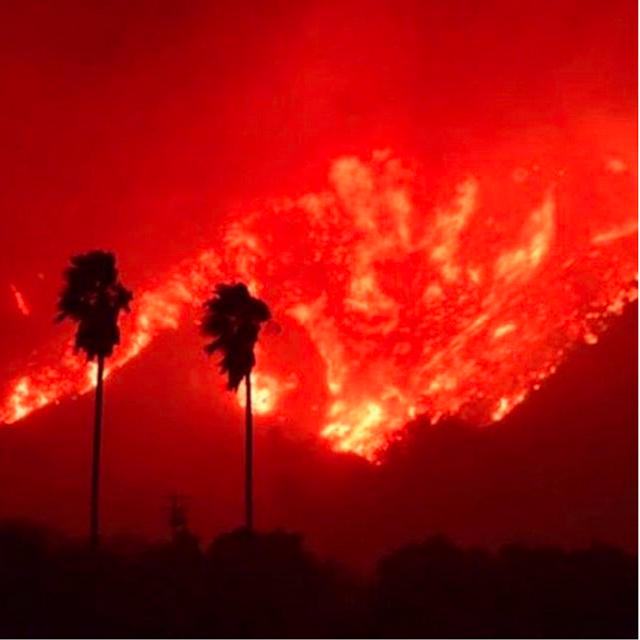 Two firefighters have thus far been hospitalized as a result of battling the Creek Fire.

The Skirball Fire in the wealthy suburb of Bel Air has thus far destroyed four homes and damaged 11 others according to the Los Angeles Times. It is now burning or has burned across 475 acres and was 20 percent contained as of late Thursday morning.

The Los Angeles Unified School District has closed 265 schools including district-affiliated charters in the San Fernando Valley and West Los Angeles areas due to the Creek and Skirball fires respectively. Most of these schools are in no immediate fire danger, however, smoke inhalation has become a severe health risk, particularly for small children and others with respiratory conditions.

The largest of the fires, the Thomas Fire in Ventura County has burned through at least 96,000 acres, roughly the size of the city of Denver, Colorado. Experts are predicting that the fire may go down as one of the most destructive in California history, having burned through 31,000 acres in nine hours which is a rate of nearly an acre per second.

Altogether, more than 300 homes, businesses and facilities have been destroyed as a result of the current fires.

The National Weather Service has now used for the first time its “Purple” or Extreme Fire Danger classification due to the high winds and bone-dry conditions. A value on the NWS scale of 48 is considered high danger while 162 is extreme. Thursday’s score is 296, which is a record.

The situation could have been far worse, however, as weather officials forecasted hurricane force Santa Ana winds topping 80 miles per hour. The winds were clocked Thursday at 50 to 60 miles per hour which were nevertheless still fast enough to significantly broaden the fires’ areas.

Fires also broke out Thursday in the San Diego area, further south. According to reports, the Lilac Fire 45 miles north of the city grew from 10 to 2,000 acres in a matter of a few hours. 20 structures have thus far been destroyed with at least two people suffering severe burns. Another fire directly north of the Lilac Fire has burned through 220 acres.

While hundreds of thousands of Southern Californians suffer the effects of this week’s wildfires, it must be remembered that the fires’ devastation is not due to an unexplained “act of God,” but has an entirely human cause, specifically the capitalist system and its subordination of fire and all other disaster prevention activities to the demands of private profit.

Despite experiencing record droughts over the past five years, the administration of Democratic Governor Jerry Brown has systematically defunded firefighting and prevention efforts throughout his tenure. Anxious to use last winter’s higher than average rainfall as pretext, he declared California’s drought over last April leading to massive cuts in emergency services and allocated a mere $2 million to help local agencies with tree and brush cleanup essential to the prevention of further large-scale fires. 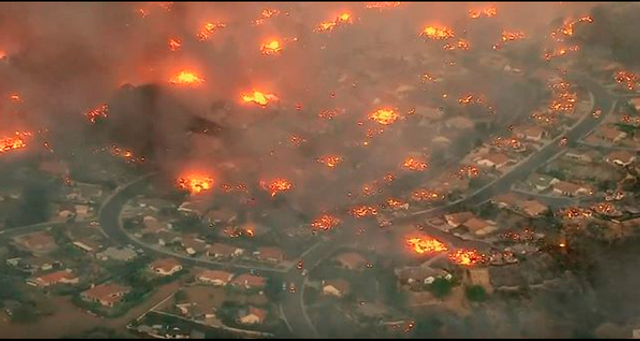 Moreover, it is no accident that the fires occur during the years of hottest temperatures in the state’s history, unmistakably caused by man-made climate change.

As if this were not enough, however, enormous profits are ready to be made off of the suffering of the fire victims.

The aftermath of October’s wildfires in Northern California is a case in point. After more than 7,500 buildings were either destroyed or severely damaged, rents skyrocketed in the areas affected.

According to data on the online real estate site Zillow as of October 24, 2017, the median rent in the Sonoma County region rose 36 percent to $3,224 per month. Rents in Napa County experienced a 23 percent jump in rent to $3,094 per month.

Although real estate prices throughout the Sonoma and Napa Valleys and San Francisco Bay Area were already absurdly high, it has become obvious that the fires were seized upon to effectively purge the area of all but the extremely wealthy. Referring to the abnormal rise in rents, Zillow senior economist Aaron Terrazas wrote, “About 80 percent of the listings we saw that week are for listings that we’d never seen before.”

Moreover, as state law prevents existing rental increases of more than 10 percent during a period of emergency, Terrazas said he doubted that many properties exceeding that amount would be advertised on sites like Zillow.

The median home price in Sonoma County is $600,000, or more than double the national average.

Of those survivors who remain in the area, many have had to resort to virtual indentured servitude to keep a roof over their heads. Sonoma County’s Shared Housing and Resource Exchange program, SHARE, which many survivors are using, was originally intended for homeowners aged 60 or older, and in exchange for reduced rent, tenants must provide services to their landlords including meal preparation and chauffeuring to appointments.

The insurance industry, for its part, has responded to the California wildfires by either gouging prices or refusing to provide fire coverage altogether.

Nearly 2 million households across the state are considered at high risk of fire. Allstate Corp., for instance, stopped writing new homeowners policies in the state altogether. Other firms are now offering plans only in less risky areas.

This has led many homeowners to purchase limited fire coverage from a state-established consortium of insurance companies. Somewhat analogous to the state’s health care exchanges under Obamacare, the program, known as the California FAIR plan, is costlier—often prohibitively so—and much less comprehensive than traditional policies. Nearly 80 percent of the FAIR plan’s policies are in urban areas with little to no wildfire risk as a result.

According to CoreLogic, an insurance data company based in Irvine, California, roughly 60 percent of American Homes are underinsured by an average of 20 percent, meaning that a $500,000 home would be $100,000 short on the cost of rebuilding after a disaster.

Many state residents are unable to rebuild at all due to prohibitive costs either with or without insurance, leading to an increase in the state’s already exploding homeless population.

Jennielynn Holmes, senior director of shelter and housing for Catholic Charities of Santa Rosa, a city in Northern California severely affected by the Tubbs Fire in October, remarked on the sharp increase in homelessness after more than 3,000 homes were lost.

The city of Los Angeles itself has the second highest number of homeless in the country after New York City at an estimated 44,000 many of whom have moved from the traditional downtown areas to those closer to the fires themselves. The Los Angeles Homeless Services Authority has only two winter shelters operating in the fire areas, one in Pacoima near the Creek Fire and one in Santa Clarita near the Rye Fire. The Red Cross Los Angeles has opened two evacuation centers has opened two evacuation centers there and one in Sylmar, also near the Creek Fire.