The Man Who Invented Christmas: Charles Dickens and the writing of A Christmas Carol

Directed by Bharat Nalluri; screenplay by Susan Coyne, based on the book by Les Standiford.

“No one could feel more deeply for Nature’s stepchildren, the blind, the dumb, and the deaf, nor more deeply–and this says even more–for the stepchildren of society .”

Charles Dickens’ novella, A Christmas Carol, published on December 19, 1843, is the story of the dramatic moral transformation of the wealthy, miserly, misanthropic businessman Ebenezer Scrooge, under the influence of several ghostly spirits who pay him a visit on Christmas Eve. 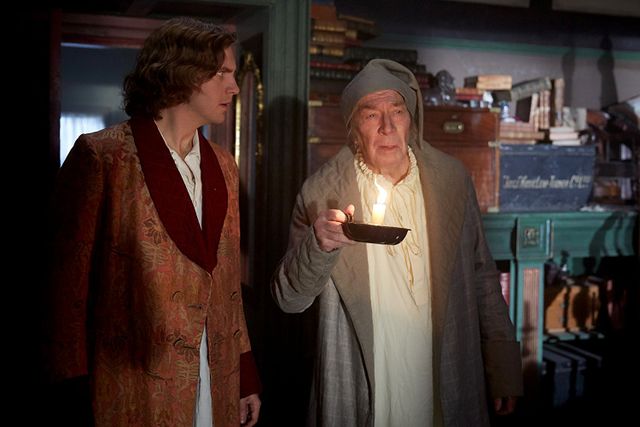 Dan Stevens and Christopher Plummer in The Man Who Invented Christmas

The spirits help Scrooge see the error of his dreadful ways, including the mistreatment of his overworked and impoverished clerk, Bob Cratchit, who has a crippled son, known as Tiny Tim. Scrooge’s initial comment about Tim, who is not expected to live long, is cruel and Malthusian: “If he be like to die, he had better do it, and decrease the surplus population.” Scrooge’s brutal comments about the benefits for the poor of prisons, workhouses and “the Treadmill” also come back to haunt and shame him (“Scrooge hung his head to hear his own words quoted by the Spirit, and was overcome with penitence and grief”).

A Christmas Carol struck a chord with readers in the 1840s, in the midst of the social misery produced by the rise of capitalist industry, and it has remained a staple of popular world literature ever since.

Dickens (1812-1870) began successful public readings of the book in 1849, which he continued until the year of his death.

Modern audiences are more likely to know the novella, or elements of it, from the numerous film and television adaptations. In fact, nearly 20 movies based on A Christmas Carol have been made since 1901, including seven silent versions. Reginald Owen (1938), Alastair Sim (1951) and Albert Finney (1970, in a musical version) are among the leading performers who have taken on the role of Ebenezer Scrooge in film. 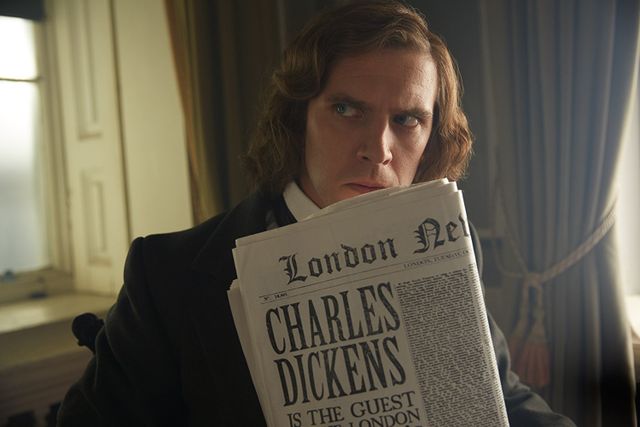 There have been, as well, dozens of theater, radio and television adaptations (with Lionel Barrymore, Basil Rathbone, John Carradine, Ralph Richardson, Fredric March, Alec Guinness, Michael Hordern, George C. Scott and Patrick Stewart, among many others, as the immortal miser). There are even five operas based on the work.

Perhaps inevitably, most of the various “second-hand” versions tend to play up the more sentimental and melodramatic aspects of Dickens’ book, which is also an attempt to present something of a panorama of English reality at the time and introduces dozens of characters from various walks of life.

The Man Who Invented Christmas, directed by Bharat Nalluri, is a biographical fantasy that involves an effort to bring A Christmas Carol once again to the screen, this time by reinventing it. For this purpose, the filmmakers turned to the 2008 novel of the same title by Les Standiford, which includes Dickens himself as a character along with his literary creations.

The movie opens as Dickens (Dan Stevens), at the peak of his popularity following the publication of Oliver Twist, is ending his 1842 North America tour. (His travelogue, American Notes for General Circulation includes a condemnation of slavery, linking the plight of the poor in England to that of the slaves in the US.)

After his return to London, Dickens’ career undergoes a serious decline over the next several years, with the failure of his next three novels ( Nicholas Nickleby, The Old Curiosity Shop and Barnaby Rudge ), thereby increasing his financial difficulties. (“London is not a place for a man without money,” Dickens explains in the film.) Under intense pressure, Charles begins composing A Christmas Carol. 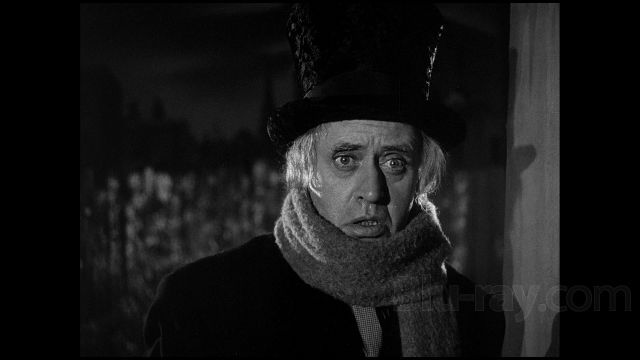 Alastair Sim as Ebenezer Scrooge in A Christmas Carol (1951)

His publishers, however, see no great potential in a Christmas tale, and give him six weeks to complete the book. Accompanied by his friend and literary agent (and real-life biographer), John Forster (Justin Edwards), Dickens goes to a restaurant where the arrogant William Thackeray (1811-1863), a rival novelist best known for Vanity Fair (1848), taunts the hard-pressed Charles. It’s not long, however, before the writer draws his first inspiration from a rich man’s funeral that is absent of mourners.

Also feeding his imagination is one of his servants, Tara (Anna Murphy), a young, literate Irish immigrant who sparks his interest in a ghostly world (“Spirits crowd over us on Christmas eve”). As the story begins to take shape, Charles interacts with his characters (“Get the name right, and if you’re lucky, the characters will appear.”), most prominently the wizened Scrooge (Christopher Plummer). Jacob Marley (Donald Sumpter), Scrooge’s deceased business partner, emerges from the darkness: “I wear the chains I forged in life–Your chains are all around you–past and present and what is to come.”

The arrival of his irresponsible father, John Dickens (Jonathan Pryce), is an impediment to Charles’ work. It is also the occasion for flashbacks to his early adolescence, when Dickens was forced to work at a blacking factory (pasting labels on pots of boot polish) for six shillings a week, 10 hours a day Monday through Saturday, after his father was taken off to debtors’ prison. Tens of thousands of people unable to pay their debts were incarcerated in such institutions each year in the 18th and 19th centuries in Britain.

Even Charles’ relationship with his pregnant wife Kate (Morfydd Clark)–“Sometimes I feel your characters mean more to you than your own flesh and blood”–and the rest of his household, run by Mrs. Fisk (Miriam Margolyes), becomes strained. 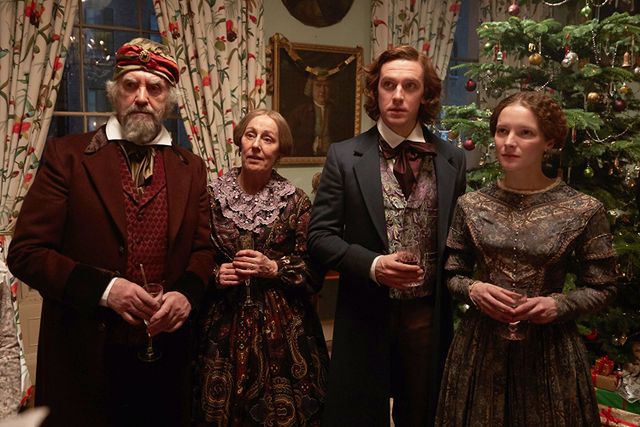 The Man Who Invented Christmas

Developing something of a writer’s block, Charles is stumped as to whether Scrooge will be reformed and whether Tiny Tim will live or die. In the end, Scrooge’s redemption also redeems Charles’ relationship with his father (“No one is useless in this world who lightens the burden of another”). Commissioning eight engravings from John Leech (Simon Callow), Charles manages to write the book and scrape together the funds to have it illustrated, printed, bound and distributed to shops in six weeks’ time!

The Man Who Invented Christmas is intended as a piece of light entertainment, and it accomplishes certain of its goals. Stevens as Dickens is the energetic, spirited artist at the mercy of the market. At times amusing, the movie does manage to convey the fact that life in Victorian England is insecure and precarious, and that even the successful Dickens feels the shadow of the debtors’ prison as he races against the clock to fulfill the outrageous demands of his publishers.

But even light entertainment has certain responsibilities. In the popular vein too, opportunities have been missed here. The simplistic, unnecessarily slight film makes only insubstantial, passing references to poverty among children–a major issue then as it is today. (Unhappily, “Dickensian” is a term that cannot yet be retired to the museum shelf.) Related to that, too much emphasis is placed on secondary psychological factors in The Man Who Invented Christmas, such as the father-son relationship.

Dickens was an immense figure, deeply affected by the social and economic transformations of his day, and not merely as the result of his own personal experiences.

The influential American critic Edmund Wilson, commented: “It is difficult for British pundits to see in him the great artist and social critic that he was. … [Dickens] was nevertheless the greatest dramatic writer that the English had had since Shakespeare, and he created the largest and most varied world.” Whenever the novelist comes to deal with institutions, Wilson went on, “he makes them either ridiculous or cruel, or both at the same time.” (“Dickens: The Two Scrooges,” 1941)

The origins of A Christmas Carol were not as slight and jovial as The Man Who Invented Christmas would have us believe. According to letterpile.com: “Charles Dickens was involved in charities and social issues throughout his entire life. In early 1843 he read a government report describing the conditions of women and children employed in mines and factories, it described the abuse of the laborers. [Friedrich Engels read the same report, which documented that children as young as eight were hauling coal carts 11 hours a day.] He was stricken down by these victims. Dickens vowed he would strike a ‘sledge hammer blow,’ on behalf of the ‘poor man’s child.’”

“The idea for the Carol came to him in October 1843, while doing a talk [in industrial Manchester, England, where the average life expectancy of a laborer in 1842 was 17]; he thought the best way to bring attention to the horror that was happening, would be to write a story instead of an article.”

In A Christmas Carol, a boy and a girl, Ignorance and Want, are hidden in the robe of the Ghost of Christmas Present. “‘They are Man’s, and they cling to me, appealing from their fathers. This boy is Ignorance. This girl is Want. Beware them both, and all of their degree, but most of all beware this boy, for on his brow I see that written which is doom, unless the writing be erased. Deny it!’ cried the Spirit, stretching out its hand towards the city. ‘Slander those who tell it ye! Admit it for your factious purposes, and make it worse. And bide the end!’”

Is this so remote from our own time?