An exhibition devoted to the life and career of Jewish art historian and gallery owner Max Stern (1904-1987), who was forced to flee Germany by the Nazis, has been cancelled by the city authorities in Düsseldorf. The exhibition was due to open at the Stadtmuseum Düsseldorf on February 1, 2018. Stern’s art collection was auctioned under pressure from the Nazis in the 1930s and has remained largely unseen ever since. 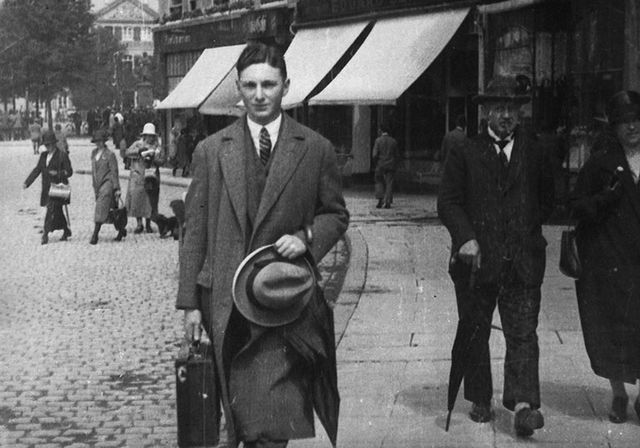 The proposed exhibition had been prepared over several years and was also scheduled to run in Canada and Israel. Concordia University and Montreal’s Jewish community, as well as the Israeli city of Haifa, participated in its planning and funding. The exhibition was intended to set an example for the cross-border, open and responsible treatment of artworks stolen by the Nazis.

In November, however, the city of Düsseldorf suddenly canceled the exhibition, apparently without consulting its Canadian and Israeli partners. Mayor Thomas Geisel (Social Democratic Party, SDP) justified the move by citing “current information and restitution requests from German museums,” relating to Stern. Geisel gave no explanation as to why this constituted sufficient grounds for cancelling the show at the Stadtmuseum Düsseldorf.

The city’s press office later provided its own statement, which consisted of vague and noncommittal phrases. Critics of the cancellation have suggested the city wanted to avoid a situation where demands could be raised for the restitution of the works of art to be shown, some of which are already subject to negotiations with potential claimants. 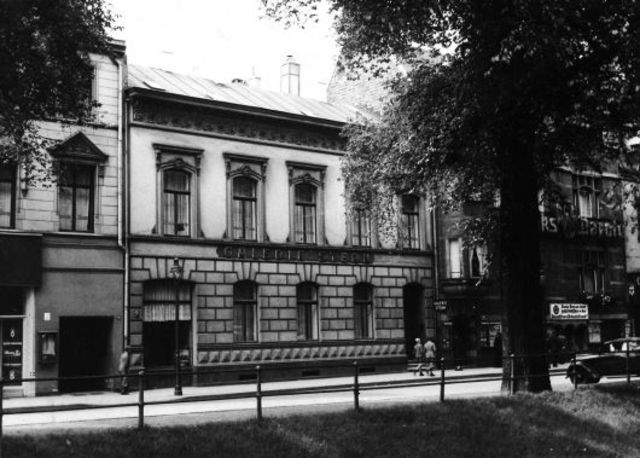 Max Stern operated an art gallery frequented by affluent customers in the Königsallee in Düsseldorf. On September 13, 1937, the Nazis’ Reich Chamber of German Arts told him in writing to shut down his gallery by September 31. A copy of the missive went to the Gestapo. Stern was “forbidden to operate, after the date mentioned, in the distribution, reproduction or mediation of the sale of cultural property.” He was told to hand over “cultural property in his possession to an art dealer or auctioneer,” who was a member of the Reich Chamber of Culture.

After the auction of 228 paintings on November 13, 1937 held at the Lempertz auction house in Cologne, Stern managed to flee to Paris. The lion’s share of the auction proceeds went to the so-called Reich tax on refugees levied by the Nazis at the rate of 25 percent of total assets, and the “Dego [Deutsche Golddiskontbank] Levy,” an extortionate fee to be paid to the latter institution, a subsidiary of the German central bank, for assets and monetary values transferred abroad. In 1936 this levy stood at 81 percent, and was later raised to 95 percent.

As is usual in these cases, the value of the paintings at auction was set very low. In addition, art dealers usually arranged amongst themselves to secure the works at the cheapest possible price. Max Stern had inherited most of the paintings in his gallery from his father. The paintings were not modern (or, in the jargon of the Nazis, “degenerate” art), but rather old masters, including paintings of the Düsseldorf School of Painting and genre paintings from the early 19th century. However, Max Stern had also made efforts to acquire works by contemporary painters such as Otto Dix. 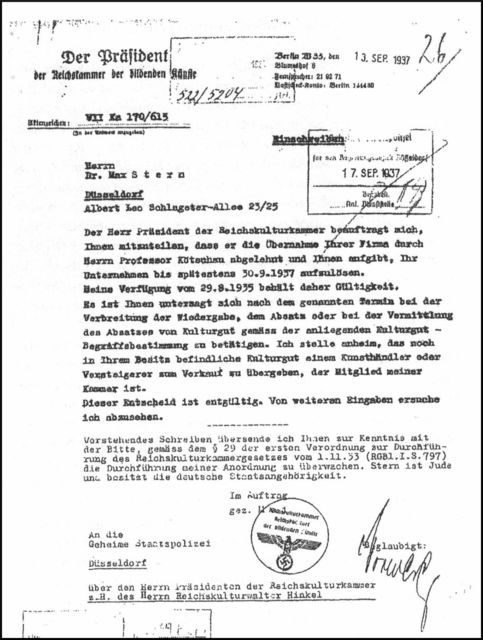 In his book, The Pictures Are Among Us. Dealing with Nazi Looted Art and the Gurlitt Case ( Die Bilder sind unter uns. Das Geschäft mit der NS-Raubkunst und der Fall Gurlitt ), author Stefan Koldehoff demonstrates, tracing individual examples, how Stern’s art collection came into the possession of Nazi bigwigs. Other paintings repeatedly appeared in the art world and were resold. Some were even auctioned again at Lempertz, without any mention being made of the forced auction in 1937. [1]

Stern’s private collection was held in storage in Cologne by the Josef Roggendorf shipping agency. From there it was confiscated by the Gestapo before the war broke out and handed over to a Cologne auction house for sale. The proceeds of the auction were then transferred to government headquarters in Düsseldorf.

From Paris Stern fled again to London, where he again opened an art gallery. However, he was detained in 1940 as an enemy alien on the Isle of Man and interned. In 1943 he was sent to Canada with many other Jewish refugees. After his release from internment in 1944, he was able to return to the art trade. In 1947, he succeeded in recovering some of his paintings from Germany and making his gallery in Montreal an important centre for modern art. He was apparently well-known for his encouragement and sponsorship of young and unknown Canadian artists. Stern also promoted the work of Emily Carr and the Group of Seven, important Canadian artists.

Dying without children, Max Stern bequeathed most of his property to three universities, McGill and Concordia in Montreal and the Hebrew University in Jerusalem. Another part of his heritage went to the National Gallery of Canada and the McCord Museum of Canadian History. The heirs of Stern were involved in the preparation of the Düsseldorf exhibition. 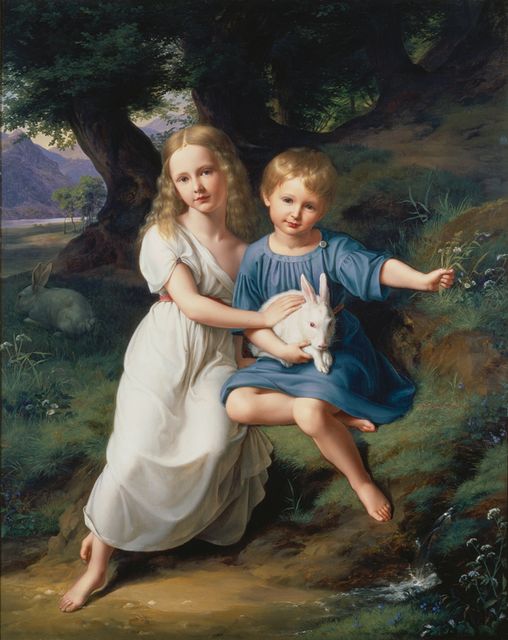 The three universities founded the Max Stern Art Restitution Project which systematically investigated the fate of around 400 artworks that were forcibly auctioned and stolen during the Nazi era. Some works have since been tracked down, restored or reclaimed. Many of them are displayed on the project’s web site.

The starting point of the planned exhibition was Self-Portrait by Friedrich Wilhelm von Schadow (1789-1862), a Romantic painter, a founder of the Düsseldorf School of Painting and director of the city’s Academy of Fine Arts. The Düsseldorf Stadtmuseum returned the painting to Stern’s heirs four years ago, but it remained on loan at the institution. The museum’s director, Susanne Anna, announced at the time she was researching Stern’s career in Düsseldorf. This is how the idea for the now cancelled exhibition came into being.

Numerous documents, including private letters and art gallery inventories, had been assembled for the exhibition. The Lenbachhaus in Munich, the Tate Gallery in London and other institutions agreed to make paintings available on loan. In Canada, more than $50,000 was raised to support the project.

Another painting from the Stern collection, Italian Family (1837), by Wilhelm Krafft, is also hanging on loan at the city museum. It was returned in June 2016 by a Düsseldorf auction house to the Max and Iris Stern Foundation, as well as the three universities favoured by Stern.

A further work, The Children of the Artist (1830), also by Schadow, which used to hang in the Düsseldorf mayor’s office and is now in storage at the Kunstpalast Museum, is controversial. The city is still negotiating the demands raised by Stern’s heirs. Mayor Geisel has spoken out against returning it to the family. He said he spent a whole day working with experts on the Schadow painting and was not of the opinion that it was subject to restitution, he said, without providing any further explanation.

Another statement by Geisel, in which he justified the cancellation of the exhibition, was revealing. He argued “there had been the danger” that the exhibition could have been misinterpreted in the sense that “we exclusively share the standpoint of the Max Stern Art Restitution Project and consider it the only correct one. But that is not true.” 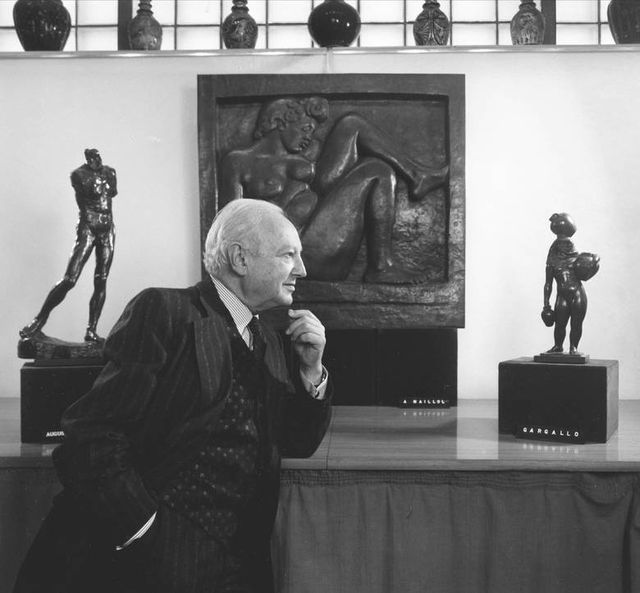 The only interpretation of these remarks is that the SPD mayor fears that the exhibition could lead to further demands for the restitution of paintings from the Max Stern Collection, which are still in private hands or public collections.

The case of Max Liebermann’s The Potato Picker, one example given by Koldehoff in his book, is also highly controversial. [2] The painting hangs in the private museum of the Pfanni food company, a subsidiary of Unilever that specializes in potato products, in Munich. Pfanni’s CEO, Otto Eckart, has categorically ruled out giving back the painting and declared: “One would have to say at a certain point that demands of this kind must now be ruled out.”

The cancellation of the Düsseldorf exhibition has met with widespread international condemnation. The director of the Max Stern Art Restitution Project, Clarence Epstein, described it as “tragic.” Once before Düsseldorf had wiped Max Stern from the historical record, he argued. “Now its is happening again, and there is little resistance in Germany from those who could stop it.”

The director of the Jewish Community Foundation in Montreal said: “To say we are disappointed is an understatement.” Criticism also came from the boards of the partner museums in Haifa and Montreal.

The President of the World Jewish Congress, Ronald Lauder, also honorary chairman of the New York Museum of Modern Art, considers the Düsseldorf decision to be a “major setback, especially for the victims of the Holocaust and their heirs. I sincerely hope that the City of Düsseldorf and its mayor Thomas Geisel will reconsider their decision in the interest of the victims of the National Socialist robberies, their heirs and the international art community.”

In a letter to the Düsseldorf mayor, Lauder writes that his reasoning sounds like “the city has something to hide.” Many members of the international art world and Jewish communities had eagerly awaited the exhibition. The official reason for the cancellation of the exhibition, i.e., “that the victims of Nazi art theft and their heirs are still searching for their property,” is absurd.

Lauder referred to the Gurlitt exhibition in the Bundeskunsthalle in Bonn. (In February 2012, the authorities confiscated hundreds of artworks from the Munich apartment of Cornelius Gurlitt, the son of art historian and dealer Hildebrand Gurlitt, some of which were suspected of having been looted by the Nazis.) The latter show made clear that it was possible to present an exhibition while victims and their heirs were still looking for their rightful property. In the case of the Düsseldorf Max Stern exhibition, it would have been possible to create “transparency and clarify the art theft of the Nazis as well as provenance research.”

The director of Düsseldorf’s Jewish Community, Michael Szentei-Heise, also protested against the city’s decision and declared: “I suspect that there are individual pieces of looted art in the Düsseldorf exhibition that would have triggered a discussion you do not seem to want.”

In the Cornelius Gurlitt case, there were initial attempts to hide the paintings he had stored in his homes in Munich and Salzburg. Gurlitt’s father was Hitler’s most important art dealer. The German prosecutor's office and the government initially declined to put on the Internet details of the art collection, which had been accidentally uncovered by customs officers.

The reason for this reaction was not so much anxiety that relatives of former owners could demand the return of their paintings. Rather, German cultural policy is driven by the fear that the Nazi networks that continued to exist after 1945 could be uncovered. Such networks organised the sale of confiscated artworks at auctions after the war to enrich themselves. Cornelius Gurlitt himself used these same networks to finance his retirement.

The topic of the Nazi confiscation of art was hushed up for decades after 1945. It was not until the 1990s that tentative attempts were made in Germany to investigate the fate of artworks stolen from Jewish owners by the Nazis. Institutions such as the Magdeburg-based German Centre for Cultural Property Losses have only recently begun systematically to investigate the whereabouts of lost objects of art that have been secretively stored in museum storerooms or villas of wealthy private owners. German museums are also reluctant to participate in such research.