“They are going to cover-up everything like they always do”

Ford Motor Company management has arrogantly dismissed concerns of workers at the company’s Kansas City Assembly Plant (KCAP) over the discovery of Legionella bacteria in a cooling tower at the factory.

The testing of the plant’s water system followed the hospitalization of a KCAP worker last month, who was placed in a medically induced coma and underwent surgery after contracting the deadly Legionnaires’ disease. Family members of the woman believed she contracted the illness while working at Ford. The worker, whose name has not been released, remains in a coma, according to public health authorities.

At the time of the woman’s initial diagnosis Ford issued a statement claiming, “We regularly test for Legionella out of an abundance of caution for our employees. All test results have been negative throughout the entire year.”

That was contradicted in subsequent press release. Ford declared, “We take the safety of our workforce very seriously. When routine testing detected a low concentration of Legionella bacteria in an outside cooling tower, we quickly disinfected that location and notified our workforce. The level of Legionella detected in our recent sampling is very low and does not represent a health risk to our workers. Legionella is common and naturally occurs in water systems like rivers, streams and lakes. The vast majority of those exposed to the bacterium do not become ill.”

What Ford did not say is that the US Occupational Safety and Health Administration (OSHA) recommends that all high-risk individuals, included those whose immune systems may be suppressed, be evacuated from a building that is suspected as the source of a Legionnaires’ outbreak, since they are more likely to contract and die from the disease.

Legionnaires’ disease is caused by the Legionella bacteria and strikes the victim’s respiratory system, producing severe, pneumonia-like symptoms. It is often fatal.

Legionnaires’ bacteria are known to grow in inadequately cleaned or maintained water systems and were blamed for at least 10 deaths in 2013-14, during the water crisis in Flint, Michigan.

Cooling towers, which are part of the heating, ventilation and air conditioning (HVAC) systems of large buildings, can be deadly breeding grounds for Legionella, providing an ideal medium for the bacteria. Workers can contract the disease by breathing in contaminated water droplets.

Ford has cited the fact that only “low levels” of the bacteria were found in the cooling tower to continue production and justify its business as usual attitude. The United Auto Workers has echoed this position. Ford spokesmen, however, have not specified the meaning of “low level” in this case. 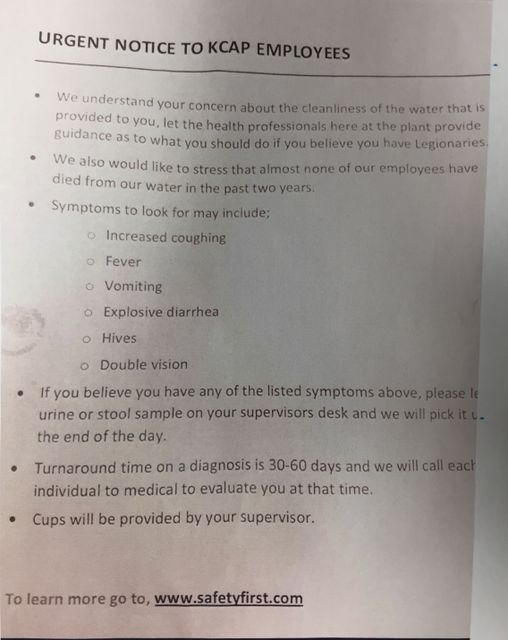 Kaitlyn Wallace, a communications specialist for the Clay County Missouri Health Department, which covers the City of Claycomo where KCAP is located, told the World Socialist Web Site that the agency was conducting its own investigation of the matter. The Health Department spokesperson, however, was not able to clarify what a “low level” of Legionella bacteria signified or if such a finding should be a cause for public concern. “I don’t know if it is a danger,” she said. “We are working with Ford on the investigation and once the investigation is finished we will notify the public.”

The agency, Wallace told the WSWS Autoworker Newsletter, was not planning independent testing at the Ford plant for Legionella. Asked by the WSWS whether the finding of the bacteria was unusual, Wallace said she did not know.

Legionnaires’ cases are uncommon in the area. According to Clay County health officials the county has average 1.8 cases per year over the last 5 years, making the discovery of a new case anything but routine.

For its part, the UAW has joined with Ford in keeping workers in the dark. Following Ford’s announcement that it had detected Legionella bacteria Jason Starr, president of UAW Local 249 at the plant, issued a statement declaring, “This afternoon the leadership of Local 249 was notified by Ford Motor Company officials that recent testing detected Legionella Bacteria in the Truck E Coat cooling tower. At this time, we have limited information and have contacted the Clay County Communicable Diseases Division to gain as much information as possible to work to keep our members safe in the identified area. As more information becomes available we will update the membership.”

An attempt by the WSWS to elicit further details from the UAW on the health situation at KCAP was unsuccessful.

A satirical version of a Ford memo widely circulated by rank-and-file workers at the plant and sent to the Autoworker Newsletter reflects the anger simmering among workers over the indifference of Ford and the UAW towards workers’ health and safety. It reads in part, “We understand your concern about the cleanliness of the water that is provided to you, let the health professionals here at the plant provide guidance as to what you should do if you believe you have Legionnaires.

“We also would like to stress that almost none of our employees have died from our water in the past two years.”

Jay, a veteran worker at KCAP who spoke to the newsletter, said workers were angry over the ongoing cover-up and had disabled all of the water fountains at the main plant as a precaution.

“They are going to cover up everything like they always do,” he said. “You shouldn’t have to worry about something like that.”

When told that Clay County health officials would not be doing their own inspection of the plant, he said, “Ford has a lot of money. Clay County doesn’t want to threaten its relationship with the company.”

KCAP employs some 7,320 hourly and salaried workers at the 4.7 million square foot facility located in the Kansas City, Missouri suburbs. Workers at the plant build the F-150 pickup truck and Ford Transit van.

“We are one of Ford’s major profit centers, Jay added, “We build their best-selling pickup. They don’t want to shut this plant.”

Asked about the response of the UAW, he said, “We are pretty much fed up. The union talks crap. Ford gets away with everything.”

This is not the first outbreak of Legionnaires’ disease at a Ford plant. In 2001, two workers died and up to a dozen were sickened by an outbreak of the disease linked to the water system at the Cleveland Casting Plant. At that time, Ford decided to temporarily halt production at the plant while health officials inspected the facility.

The events at KCAP once again demonstrate the fraud of the joint UAW-Ford health and safety committees that supposedly protect the lives of Ford workers. These committees are nothing but fronts for the company whose chief concern is making sure nothing disrupts production and profits.

Workers must demand the right to examine all the available information regarding the Legionella findings at KCAP and be prepared to take the appropriate action, including evacuating the plant pending a full and independent health and safety review while suffering no loss of pay.

This underscores the importance of the call by the WSWS Autoworker Newsletter and Socialist Equality Party for the formation of rank-and-file factory committees to act as the genuine voice of the workers in opposition to the pro-corporate lackeys in the UAW. Workers seeking assistance in building a rank-and-file committee at your plant should contact the Autoworker Newsletter.