On Thursday afternoon, four Bexar County sheriff’s deputies, firing at a fleeing woman, shot and killed six-year-old Kameron Prescott when at least one round pierced through the wall of his San Antonio-area mobile home.

Thirty-year-old Amanda Lenee Jones was attempting to break into the family’s trailer home, trying to hide from police, when she was fatally shot by four deputies. According to Sheriff Javier Salazar, Jones was holding an eight-inch long tube that looked like a weapon. One of the bullets fired at Jones went through the trailer’s wall and hit Prescott in the abdomen. He was later pronounced dead at University Hospital. 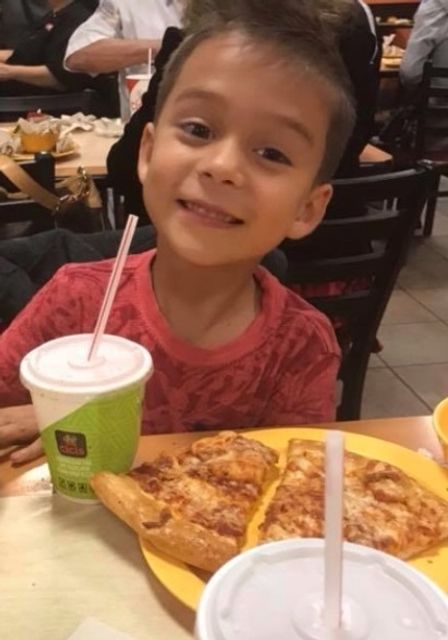 Police had been tracking Jones after a man called the sheriff’s office to report a stolen car around 11 a.m. The resulting nearly two-hour chase, during which Jones swam across a creek and fled into the woods, added two more names to the more than 1,100 individuals police have killed this year.

Kameron Prescott was home early after his elementary school released students at noon for Christmas break. Kameron, a first-grader at Wiederstein Elementary School, “was the kindest-hearted little boy that I have ever had the pleasure of teaching,” his teacher Shanda Ince said in a statement on the school district’s website.

“Kameron was a ball of energy, happy, smart and could strike up a conversation with anyone,” school counselor Maria Morales said. “He also had a great sense of humor and caring heart. He’ll be truly missed by his classmates, teachers and the Wiederstein staff.”

According to killedbypolice.net, 1,153 people have been killed by police so far in 2017. A database kept by the Washington Post indicates Prescott is the 28th minor to be killed by police this year.

His family has launched a GoFundMe page to raise money for funeral expenses.

Police in Grand Rapids, Michigan, who pointed a gun at Honestie Hodges and then handcuffed her, will not face disciplinary action, the police department announced this week.

On December 6, officers were searching for a woman named Carrie Manning, suspected of stabbing her younger sister. Instead, at a nearby home, they came upon Honestie Hodges, who is the suspect’s niece. She had been walking out the door on the way to the store with her mother and another aunt.

The incident was caught on body cam footage and shows Hodges approaching a pair of officers with her arms raised while one pointed a gun at her. One officer told Hodges to put her hands down, then told her to turn around and walk backwards to him. Hodges’ mother yelled at the officers to stop, telling them Hodges was only 11 years old.

When Hodges reached the officers, one instructed her to place her right hand behind her back as he procured a pair of handcuffs. Hodges began to panic and scream “no” over and over. One of the officers handcuffing her tried to calm her: “You’re not going to jail or anything,” but the screams continued as the video clip ended.

“I didn’t know what was going on,” Hodges told WXMI after the incident. “I didn’t do anything wrong. I’ve never got in trouble by the Grand Rapids Police. I used to want to be a Grand Rapids police officer, but ever since that happened, I want nothing to do with them.”

Police Chief David Rahinsky said he believed the officers behaved incorrectly and should have instead “asked the 11-year-old to back to you, take her behind the car and have a very different conversation with her.”

However, the internal investigation that followed the incident found that the officers did not violate departmental policy.

In March, a similar incident occurred when at least eight Grand Rapids police drew their weapons on and detained a group of five boys. Police were responding to reports of a fight at a nearby basketball court. According to police, officers drew their weapons because the report indicated a suspect in the altercation might be armed. The boys were not involved in the fight, but simply at the wrong place at the wrong time.