AT&T and other US telecoms begin wave of layoffs

AT&T, the largest telecom firm in the US, has announced a new wave of layoffs, which will begin in early 2018. This comes after AT&T laid off hundreds of installers in its DirecTV unit despite having announced strong subscriber growth. AT&T recorded $10.4 billion in profits in the first three quarters of 2017, after a $20 billion profit in 2016.

Just before the Christmas holiday, AT&T laid off 700 DirecTV home installers, according to a New York Post report. A subsequent report from the Chicago Tribune said the telecom giant cut an additional 600 employees in the Midwest. The company cut another 700 jobs in the Southwest region, according to an unnamed source cited by DSLReports.

Telecom firms traditionally announce a “Reduction in Force” (RIF) late in the year in order to have workers off the payroll before the New Year when their benefits and vacation time reset. While such RIFs traditionally hit lower-level managers, these job cuts have affected hundreds of hourly technicians.

AT&T has attributed the layoffs, which could number in the thousands, in part to “technology improvements” related to its declining landline voice and data services. The new job cuts, however, are just a prelude to the blood-letting that will result from a wave of industry mergers, including the proposed $85 billion AT&T and Time Warner deal.

The layoffs were announced shortly before AT&T announced it would pay $1,000 bonuses to each of its 200,000 workers and invest an additional $1 billion in capital spending in 2018 due to Trump’s newly passed tax rules.

AT&T effectively handed the Trump administration a propaganda tool to support claims that his tax cuts for corporate America and the super-rich would trickle down to workers. Trump quickly pointed to the bonuses while neglecting to mention the layoffs.

The bonuses for workers are actually regressive because they are not compounded into base pay, used to calculate pensions and future pay raises, and can be tied to various corporate profit and productivity metrics that employees have little control over.

The move by AT&T is aimed at bolstering its support with the Trump administration, which is currently holding up the merger, largely because of the president’s hostility to Time Warner’s CNN news network.

If approved the deal would give AT&T control over media content, which is more lucrative than the delivery of content, and result in one of the largest media monopolies ever, with the telecom giant taking control of CNN, HBO, Cinemax, Warner Bros. Pictures, Castle Rock Entertainment and others.

The Communications Workers of America (CWA) union has claimed the new layoffs are an “act of bad faith” and a violation of the union’s four-year labor agreement covering 20,000 AT&T workers in the southwestern US. Far from organizing the genuine opposition of hundreds of thousands of CWA workers around the country, the union filed a toothless lawsuit in a US district court and a complaint with the National Labor Relations Board. The complaint charges that the layoff of 713 workers in Texas, Oklahoma, Arkansas and other states, and their replacement with non-union subcontractors, was a “bad faith diminution of the bargaining unit.”

The lawsuit is little more than a public relations stunt aimed at shoring up the dues income of the union apparatus, while covering up the CWA’s long-standing collusion in the downsizing of the industry.

After the CWA signed a sellout agreement covering 20,000 AT&T Mobility workers in mid-December, the union issued a press release offering its “full support for the AT&T-Time Warner Merger,” a move that will destroy tens of thousands of jobs. So much for the CWA’s slogan of “fighting corporate greed.”

Having long abandoned the principle of “No contract, no work,” the CWA kept wireless AT&T Mobility workers on the job for 11 months after the expiration of their contract. Facing rank-and-file opposition, the union called a three-day strike in May, which was joined by 17,000 wireline workers in California and Nevada. This was another publicity stunt that was shut down before it had any impact on AT&T. 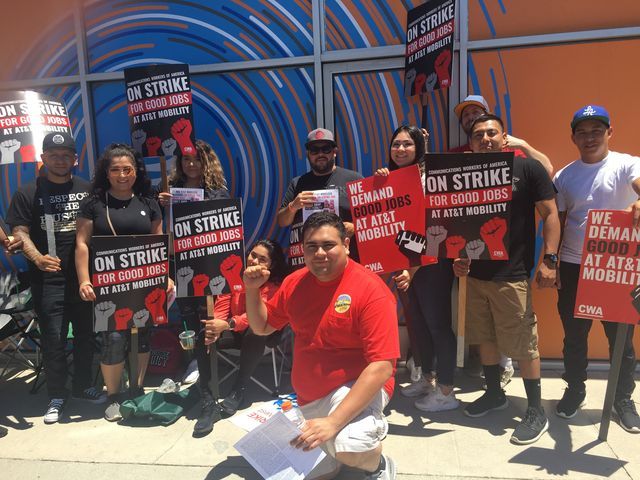 The four-year deal for the AT&T Mobility workers will help the union extend its reach into the wireless division—and increase dues income—while maintaining substandard wages and benefits for wireless workers.

Predictably the CWA called this sellout a “groundbreaking” victory. Pay raises barely keep pace with inflation. While the CWA touts the $19-an-hour workers will be making at the end of the contract, this is less than the hourly wage needed to rent a two-bedroom apartment in many states, and most metropolitan areas in the US.

It is also about half what CWA employees earn in the legacy landline units where, for example, business office representatives at Verizon’s New York City locations are paid over $35 an hour while technicians earn over $40 an hour. Far from advancing wages the CWA is working with the telecom companies to use the low wages in the wireless units as the benchmark for lowering wages throughout the industry. Meanwhile, the CWA will be able to collect dues from these miserably paid workers.

The CWA press release on the contract celebrates how calls would be routed to call centers in the US. As it has done in the past, the CWA promotes its nationalist agenda in line with Trump’s America First economic program, which pits workers in the US against their class brothers and sisters in the Philippines and other countries, and blocks a common international struggle by the working class.

The CWA functions as a tool of the corporations and both big business parties. In July 2015, CWA President Chris Shelton accompanied other union officials at a White House meeting with President Barack Obama to discuss the danger of a “wages push” by millions of workers coming up for new labor contracts.

After leaving the meeting, Shelton and other union leaders systematically blocked any unified action by telecom, auto, steel and public-sector workers, and instead extended contracts or signed deals with meager pay raises that were more than eaten up by increased health care contributions pushed by the Obama administration.

Facing a rank-and-file rebellion by 39,000 Verizon workers, the CWA and the International Brotherhood of Electrical Workers (IBEW) did everything to isolate and defeat the seven-week walkout before signing a deal with higher out-of-pocket medical costs, a reduction in sick leave and other concessions. Verizon workers who have spoken to the WSWS Telecom Worker Newsletter say they still have not seen the CWA contract a year and a half after the conclusion of the strike. 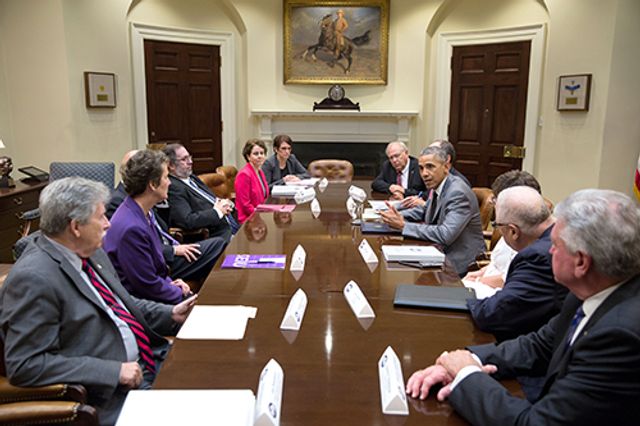 As for the IBEW, it has followed up its betrayal of New England Verizon workers with its treacherous isolation of the 11-month strike of 1,700 Spectrum workers in New York and New Jersey.

After colluding with the Democratic Obama administration, the unions are now cozying up to President Trump.

Millions of people are opposed to the administration’s attack on net neutrality, which gives internet service providers power to censor web sites and data. It will also give telecom companies like AT&T and Verizon a greenlight to scale back on investments, since restricting the flow of data requires less robust transmission networks, and allowing the companies to trim their workforces further.

While issuing perfunctory criticism of the Federal Communications Commission’s decision to repeal net neutrality, the CWA has no more intention of fighting this undemocratic measure than fighting “corporate greed.” As one union bureaucrat speaking on the repeal of net neutrality privately told this reporter, who is a member of CWA at Verizon, “I don’t see the problem with it. It’s making our stock go up.”

Opposition is growing, however. The WSWS Telecom Worker Newsletter urges workers to form fighting workplace committees, which are controlled by and answerable to the rank and file, not the corporate bosses and their union servants. Social media and other forms of communication should be used to exchange information and prepare a common fight against layoffs and the continued erosion of living standards and working conditions. Such a struggle will more and more thrust the working class into a political battle against both big business parties and the corporate and financial oligarchy, which have a dictatorial hold on society.