The continued large number of eviction cases in New York City is an expression of the widening social inequality in the home of Wall Street. There is a strong correlation between the number of evictions and census tracts with high rates of deep poverty according to a report by Community Services Society of New York.

The inflation of rents that occurred first mainly in Manhattan has forced people into the outer boroughs of the city that are in turn facing rising rents due to gentrification. Almost half of the rental apartments in New York City are rent stabilized, which keeps rent increases lower than current market rates. There are about 990,000 stabilized units, with 2.6 million people living in them. However, since 2007, at least 172,000 apartments have been deregulated.

Although the rate of evictions in New York City had gone up each year from 2005 to 2015, there was a decrease of 18 percent in the number of cases resulting in immediate eviction—from 26,857 in 2014 to 21,988 in 2016, according to Housing Court Answers, a non-profit organization providing aid to tenants in housing court. This dip resulted chiefly from a program fought for by advocates for years to provide lawyers for low-income tenants facing eviction cases. Where ninety percent of landlords had attorneys in housing court, only ten percent of tenants did.

However, despite the dip, there are a growing number of evictions in poor neighborhoods that have been undergoing gentrification. Pro-landlord provisions in the Rent Stabilization Law, like the twenty percent bonus that a landlord can add to the rent upon vacancy, contribute to tenant harassment in neighborhoods with rising rents. The City’s Independent Budget Office analysis in 2017 shows that 43 percent of family shelter entries came from rent regulated apartments.

One indicator of the hardships faced by tenants has been the increase in the number of lawyers and others who specialize in aiding landlords in evicting tenants. Such a service in the Bedford-Stuyvesant community of Brooklyn is Quick Evic, spotlighted in AM New York. It increased its revenue from $20,000 in 2015 to more than $200,000 in 2017. The owner of Quick Evic, Richard Cabello, estimates that one out of ten households in Bed-Stuy is fighting in housing court to keep their homes. In one instance, Quick Evic helped a landlord evict three families who had been paying on-time rents of between $1,600 and $1,800 a month in a three-family house without a formal lease. The landlord increased the rent by a $1,000 a month for each apartment, according to AM New York.

In another outrageous case, Justa Lopez, who is 100 years old, faced an attempt by Paley Management Corp. to evict her from her apartment on Manhattan’s Upper East Side that she has occupied for 50 years without missing a rent payment. The landlord claims that she is not living there. She broke her hip a year ago and after therapy in a nursing home was convalescing in her daughter’s home—a situation of medical treatment her lawyer says does not count legally as being away from the apartment. The real reason for the eviction is that under New York’s rent control regulation, Lopez is paying $150 a month for a two-bedroom apartment that the landlord would rent on the market for $2,700, according to the New York Post.

Workers earning the federal minimum wage of $7.25 an hour cannot find an affordable place to live anywhere in the country, according to a 2016 report from the National low Income Housing Coalition. Zillow real estate database notes that about forty percent of working-age, unmarried or un-partnered adult renters in New York City are in “doubled up” households with roommates or family members, a figure that has been increasing every year since 2005, most of all for ages 23 to 29. The increase has been at the same rate among unemployed and employed adults, indicating that many twenty-somethings work in relatively low-wage jobs.

Homelessness across the US reached 550,000 in 2017 while in New York City the number of homeless and on the streets rose four percent to 60,000. Ten percent of New York City public school students, or more than 100,000, are homeless. Evictions result in children being displaced from their schools and family, and an increased suicide rate. Further, a record of eviction makes it more difficult to rent in the future.

The 2015 Rental Housing Finance Survey by the U.S. Census Bureau shows that large corporate and private equity investors have been increasing their share of rental housing. They are more likely to evict tenants than are small landlords. Yet, while the typical renter household had an annual income of just $37,900 in 2015, the number of units renting for $2,000 per month or more increased 97 percent, requiring almost two-thirds of the monthly income of low-paid workers, according to Harvard’s Joint Center for Housing Studies in 2017.

New York’s Democrat mayor Bill de Blasio has claimed that his program to finance the building or preservation of 200,000 affordable housing units by 2024 will reach his goal ahead of schedule and for his second term he has increased the goal to 300,000. De Blasio’s goals are woefully inadequate in light of a deficit of over 700,000 housing units for low-income New Yorkers, as pointed out in a 2015 study by advocacy group “Real Affordability for All.” 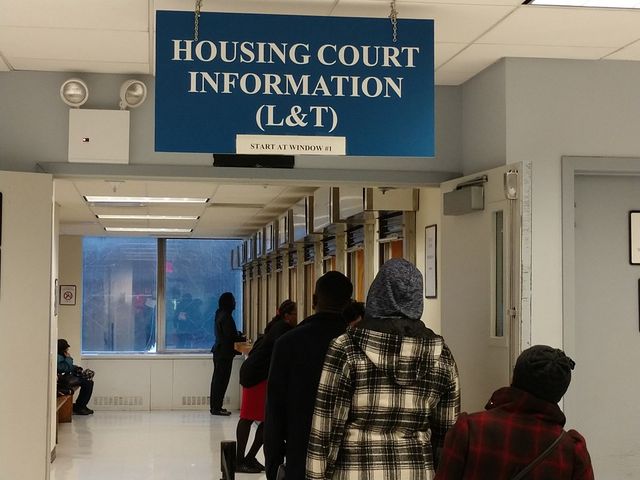 Line at the Brooklyn Housing Court

A World Socialist Web Site reporting team spoke with tenants at the Brooklyn Housing Court to obtain a picture of the issues facing renters.

Deborah, a home health aide, was accompanying her client, Janice Mikell from the Coney Island area of Brooklyn. “I was here yesterday for myself and now today I am here as an assistant for her. I live in an attic apartment. Every year the landlord raises the rent. It was $1,200 a month when I moved in, in 2015. She had it at $1,450 a year ago and she is asking $1,550 for 2018. She raises it when she feels like it. After I said I can’t pay that high rent, she suddenly wants her apartment for personal reasons. I know a lot of people who have the same problem. In Bed-Stuy, where I live, they want exorbitant prices. A lot of people claim it is white people moving back into Brooklyn. The question is will the housing be for people of every salary?”

A woman was waiting her turn with her young son to get a form from a clerk. “I am here just to get documents showing my eviction case was cleared up. I had a pending eviction a few times because I needed to use my money to pay tuition at City College, where I studied criminal justice. Now I work as a Family Services Coordinator at Child Center of New York. I have two children, ages eight and seven. Once I was done with school and I got back my taxes, I was able to pay off the $8,000 debt for which I was in arrears. The judge had given me time to pay. It is hard to get a new apartment since my rent case is on my credit report. People who will rent to me now want a document from the court showing it is cleared up.

“I know people who have similar situations over eviction threats. We are afraid of not knowing what would happen. The housing situation in New York City is a financial challenge. It is hard to find an apartment that you can afford. There are eligibility requirements—income and number of people in the household—for the affordable apartments for which they hold lotteries. In the shelter system I encounter many mental health problems. This is a great big problem. There are people who do not know how to survive in this.”

Sharon who lives in East New York, declared. “My neighborhood is changing. It was a predominantly black neighborhood. There are different sectors of the population moving in. They are buying the homes and pushing up prices. A black guy on the block owned a small two-bedroom apartment, that could only fit a bunk bed, and he rented it for $1,800. He was influenced by the changes. They are doing vicious things to get people out. They can get a millions for a small, dilapidated house.”

Maritza Henriquez, helps people coming into Housing Court at a table set up in the main room by a non-profit called Housing Court Answers. She explained, “Housing Court Answers has people who want to help people but many of us are New York City residents who are suffering under the gentrification. Most people are here for non-payment of rent, so they could face eviction.”

“I have done this work for two and a half years. Brooklyn’s evictions were at their craziest a few years ago, but the problem has been picking up again in a few neighborhoods. I heard of some people who get bonuses from landlords for helping get people out, sometimes destroying things in the apartment. It is worse for the elderly and disabled especially.

“I think a lot of politicians and leaders are trying to funnel the issues involved into one response, such as providing housing court lawyers. The way New York’s Housing Court was started in 1973 was, in theory, to be a place that can aid tenants. But it is actually a collector agency for landlords.”

Asked what she saw as the cause of the problem, Maritza answered, “The government is enabling this to happen and the government has its interest in doing that. The people who control the government are the corporations. Anything they do is not going to solve the issue if they are not going to do what will help the poor people. I share a lot of socialist values. I think capitalism is the problem. This system is like a giant beast that is hurting people.”