Dolores O’Riordan, lead singer and songwriter for the internationally acclaimed multi-platinum rock group The Cranberries, was pronounced dead from unspecified causes Monday morning, January 15, after the singer was found unresponsive in her hotel room in London. At the time of her death, O’Riordan had been recording vocals for an upcoming musical project. She leaves behind a musical catalog spanning nearly three decades. 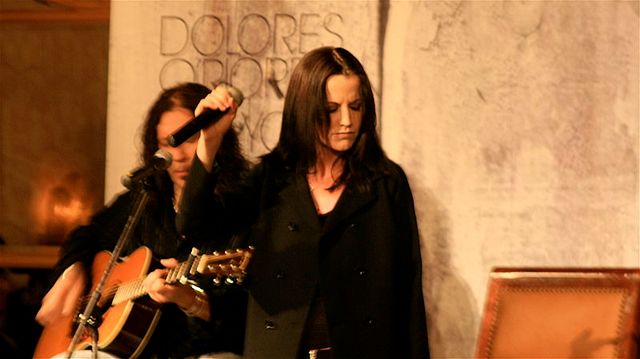 O’Riordan’s death has been mourned across the media and cultural establishment. The singer undoubtedly possessed certain gifts; a delicate voice which at its finest captures the innocence of youth. She won numerous international awards for her work with The Cranberries, the latter selling over 40 million albums globally.

Born in 1971 in Ballybricken, Limerick County, Ireland, O’Riordan joined The Cranberries in 1990, shortly after the group formed. Their debut album, 1993’s Everybody Else is Doing it, So Why Can’t We? showcased O’Riordan’s subtle and haunting vocal style, which was punctuated by Celtic-influenced voice inflections.

Singles such as “Linger” (an international hit which propelled O’Riordan and bandmates Noel Hogan, Mike Hogan and Fergal Lawler to fame) and “Dreams” are charming, notable primarily for O’Riordan’s melancholic vocals and the innocence of the subject matter. “Linger” is about the thrill and pain of a childhood crush who subsequently moves on.

The Cranberries revealed a more incisive and socially conscious edge on 1994’s No Need to Argue. The single “Zombie” captures palpable feelings of horror and grief relating to a terror bombing perpetrated by the Irish Republican Army (IRA) in 1993, an event connected to the Northern Ireland Conflict (1968-1998) between Irish nationalists and loyalists to Britain.

O’Riordan’s vocals go from pleading and desperate (“May you see, it’s not me/ It’s not my family/ In your head, in your head, they are fightin’”) to nearly wrathful as the chorus pours out, pushed forward by powerful guitar chords in a style reminiscent of American “grunge” rock. The song would go on to win numerous awards and the album would eventually sell 17 million copies worldwide.

Despite the success of this song, one senses that with “Zombie” the band, working with highly complex subject matter, had hit a high-water mark. The song registers feelings of rage and angst at this injustice, but fails to go deeper than a visceral-emotional response to the situation.

The band’s subsequent releases lack much of the urgency and enjoyability of early efforts, with 1996’s To the Faithful Departed containing many songs with overt and overly self-conscious lyrics, including some which were downright shameful, such as the endorsement of western military intervention in the Yugoslavian civil war in the song “Bosnia.”

O’Riordan later told the Irish Times this period constituted “the worst time of my life,” due to her being “underweight, drinking too much and very depressed.” No doubt, the difficulties of fame and an unforgiving social climate were also having an effect.

In 2003 the group would disband, with O’Riordan and other members pursuing individual careers. O’Riordan released a string of solo albums to mixed reviews before reuniting with The Cranberries in 2009.

Despite the reunion, continued infighting among the group would force its members to produce only a single album in 2012’s Roses, followed by Something Else in 2017, composed largely of live performances of older songs. O’Riordan would involve herself with other associated acts in the meantime. These latter releases have their moments, although they lack the power of the group’s earliest singles.

Unsurprisingly, O’Riordan (named one of Ireland’s 10 wealthiest women in 2006) was not free from pressures both personal and social in form. In 2013 the singer spoke to Life magazine about her difficult childhood, which included sexual abuse at the hands of someone she had trusted.

In addition, O’Riordan suffered from depression and bipolar disorder, a condition that produces intense and often rapid mood swings. These difficulties, along with the distorting pressures of fame, apparently collided in a November 2014 incident in which O’Riordan was arrested and charged with verbally and physically assaulting crewmembers aboard a flight from New York to her native Ireland.

Upon her death, O’Riordan received numerous tributes from Ireland’s political establishment, including Ireland’s president, Michael Higgins, and the Taoiseach Leo Valadkar (the latter a member of the socially conservative Fine Gael party). Undoubtedly, that such repugnant political and social figures could find comfort in the music of O’Riordan is a testament to her artistic weaknesses rather than her strengths.

It is perhaps not surprising that O’Riordan’s stronger vocal appearances in the latter part of her career are featured on The Cranberries’ 2017 Something Else, which includes acoustic reprises of many of the group’s older material. These songs, while comparably simpler in arrangement, still carry more emotional and social weight than much of O’Riordan’s more recent material.