Friends, relatives and supporters of Albanian immigrant worker Ded Rranxburgaj attended a rally in Detroit yesterday to oppose his planned deportation by the Trump administration’s Immigration Customs Enforcement (ICE). Rranxburgaj, who is the sole carer for his disabled, wheelchair-bound wife, announced on January 16 that he was taking refuge in a local church in a desperate attempt to prevent his deportation, which is scheduled for today.

Rranxburgaj, now 48, immigrated to the US from Albania in 2000, accompanied by his wife Flora and their seven-year-old son Lorenc. Ded and his wife were reportedly initially granted temporary asylum on the basis of threatened persecution in Albania. In 2006, his visa was ended, but he was allowed to remain in the US to care for his wife, who was diagnosed with multiple sclerosis, a debilitating autoimmune disease. 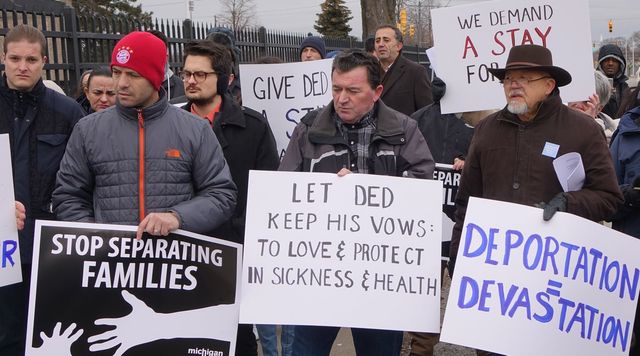 A section of the rally in Detroit

Like countless other immigrants, including more than 800,000 DACA recipients, Ded’s status was kept in a state of limbo over the following 11 years, continuing under the Obama administration. His right to remain in the country was subject to his attending annual or twice-yearly check-ups with immigration officials, who could decide to revoke his visa at any time, as the Trump administration has now done.

Rranzburgaj has worked for 17 years in a low-wage job as a busboy and a cook in a Coney Island restaurant in Detroit, providing for Flora and sons Lorenc, now 24, and Eric, 15. Friends and family told the World Socialist Web Site that over this time he had not taken a single day off work and worked 60-70 hours a week.

Wednesday’s rally was organized by Michigan United, an immigrant rights advocacy organization and held outside ICE offices in Detroit. Also participating was Jill Zundel, the pastor of Central United Methodist Church in downtown Detroit, where Ded and his family have taken refuge. ICE has a “sensitive locations” policy, which has so far meant that it has not carried out deportation raids on churches.

Eric, who was born in the US and is an American citizen, gave moving comments at the protest. “My dad has been in America for 17 years and for every single one of those days, he has been working at Coney Island, working to pay off the bills for my mother, me and my brother,” Eric said. “He is the only caregiver for our family.”

“My mum’s MS [multiple sclerosis] was found when I was two or three years old. At that time she was alright, but over the years she has been degraded to the state she is in now. My dad has to take care of her for the clothing, bathing, and feeding. Normal things that normal people can do, she can’t do, so my dad supports her.”

“My life was fearful for a long time, because any day my dad could get deported, which would separate our family. It was in my mind for a lot of the day when I was at school. Back in October [2017], an officer called my dad up, and after hours and hours of him calling his boss, his boss’s boss, and so forth, they told us that my dad is getting deported in January... I thought it wasn’t real. When our lawyers were telling us things that we could do to stop it, that’s when I knew it was real.”

Eric continued, “If my dad got deported, I’m not sure what we would do. I would probably have to get a part-time job. My brother would drop out of [college] to work full-time to support our family, my mum and the bills.” 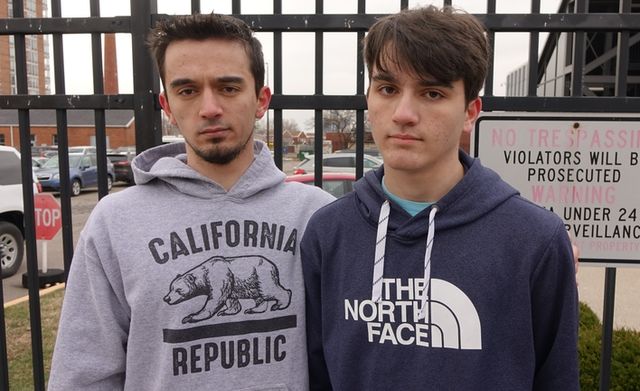 In comments to the World Socialist Web Site, Eric, who is studying at Southgate High School, spoke against the anti-immigrant policies and the subordination of society to the rich. “This shouldn’t be a thing that we have to worry about,” he said. “I really hope they fix immigration entirely. This is ridiculous.”

“There’s nothing we can do about it, because the way America works is that if you were born into a rich family then they can get through anything they want. If you’re born with a golden spoon, you get everything you want in life. It’s as simple as that. But if you’re a low-class working family, like my dad is, then it takes a lot of time and apparently you still don’t get what you need.”

“They don’t look at the small guy anymore,” he continued. “They only pay attention to the big people.”

A WSWS reporter asked Eric for reaction to the announcement by Democrats that they will support the building of Trump’s wall along the US-Mexican border.

“That’s a lot of taxpayer money just wasted on the wall that you don’t need,” he replied. “I personally think, instead of a wall, they should make a huge gate, like a big open door to invite people from other places in.”

Eric’s older brother Lorenc is covered under DACA, a temporary visa class for immigrants who arrived in the US when they were young. The Trump administration announced last September that it would end the DACA program. On Monday, Democrats voted to end a three-day government shutdown without receiving any guarantees to protect DACA recipients from deportation, ending what was always a political charade aimed at providing a fig leaf of opposition to Trump’s anti-immigrant assault.

“I have followed the DACA issue every day,” Lorenc said. “I look it up. Some days it looked like they’re about to come to an agreement, and something happens. The last thing was the shutdown.” Asked what he thought about the Democrats’ vote to end the shutdown, Lorenc said, “I knew it was going to happen... I knew they would be in favor of opening up the government again. It’s all about the haves and have-nots.”

Lorenc said that with his father out of work, the family is now relying on donations through a GoFundMe account to pay for gas and groceries. “We had an apartment but we had to let it go,” he said. “No one can pay rent. Technically we could be considered homeless.” Lorenc did not know where the family will go if his father is deported.

“Things weren’t bad before, but they weren’t good either,” Lorenc said. “We were getting by.” After his computer broke down a while ago, he had no money to get a new one for his studies. “Once things break down, it’s hard to fix them or get something else. Computers aren’t just lying around. I usually have to go to school when the library is open and use the computers there.”

ICE has responded to the family’s appeals with silence. Even if he is not immediately deported, Rranxburgaj will be left in an unbearable position, unable to leave the church and with his family effectively homeless.

The threatened deportation of Ded Rranxburgaj is part of a broader crackdown on immigrants and undocumented workers around the United States by the Trump administration. Scenes like those which played out in the Rranxburgaj family home last October are taking place for dozens of other people every day across the United States, just as they did under the Obama administration, which deported more immigrants than any of its predecessors.