Audiences worldwide have been subjected to yet another installment in the “Marvel Cinematic Universe” superhero film series. The latest film is Black Panther (directed by Ryan Coogler and starring Chadwick Boseman, Michael B. Jordan and Lupita Nyong’o), based on Stan Lee and Jack Kirby’s 1966 comic book character of the same name.

The film has been overwhelmingly hailed as a “defining moment” in African American and movie history for featuring an almost entirely all-black cast, directed by an African American director, with a screenplay by black writers (Coogler and Joe Robert Cole). Such praise, however, only testifies to the general degradation of art, culture and film criticism in contemporary America. The film’s supposed achievements do not save it from being a vacuous work, which does not withstand a moment of serious reflection.

It is set in the fictional African kingdom of Wakanda, where tribesmen have succeeded in harnessing the energies of the alien metal “vibranium,” which centuries before struck the planet during a meteor shower. This metal also gives those who possess it the “strength, speed and instincts” of a black panther.

With the use of this resource, Wakanda has developed into a technologically advanced nation, concealed from the rest of the planet via a cloak of invisibility. Its ruler, King T’Challa/Black Panther (Boseman), defends his kingdom decked out in a bulletproof panther suit. 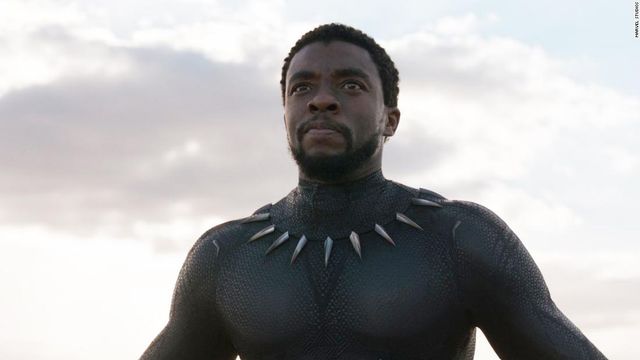 We are supposed to look upon this silliness as having a profound import for the simple reason that Black Panther is the first Marvel film, as was the comic series in its time, starring a superhero of African descent. Needless to say, the identity politics crowd is having a field day proclaiming the film to possess a vast social and artistic significance.

Apart from its racialist theme, the film is nothing more than a conventional Hollywood “blockbuster,” chock full of action sequences, explosions and the rest. But moviegoers have been told it is their civic duty to go see it because it shows black people in “positions of power.”

The premise that in today’s world a black superhero represents some kind of social or moral breakthrough is itself absurd. The United States, after all, elected Barack Obama as its head of state twice and has seen a highly-privileged section of African-Americans—no less reactionary than their white counterparts—in some of the highest offices of the state (Colin Powell, Condoleezza Rice, Eric Holder, etc.). The presence of blacks at the head of capitalist states, from the US to South Africa, has done nothing to improve the lot of the masses of working and poor people, black or white.

More fundamentally, the use of race as the basis for evaluating a film, or any other creative work is artistically bankrupt and politically reactionary. The pedigree for such conceptions can be found in the theory and practice of Aryan art, which flourished under the Nazis.

News coverage in the lead-up to the film’s release, a key component of its multi-million-dollar marketing campaign, gave the impression that a viewing of the film would be enough to inspire impoverished black children to lift themselves up by their own bootstraps. Bobby Seale, co-founder of the Black Panther Party, has joined in the general establishment promotion of the work, sending out tweets encouraging his followers to see the film.

The movie has generated record proceeds of more than $400 million worldwide so far, making it the highest-grossing opening for a film with a black director. It is expected to be among the highest grossing movies of all time, guaranteeing a rush of sequels, spin-offs, theme park attractions and merchandising gimmicks.

Absolutely revolting, but not unexpected, have been the paeans surrounding the film in the mainstream press, with the New York Times leading the way, as usual. The New York Times Magazine featured a lengthy article (“Why ‘Black Panther’ Is a Defining Moment for Black America”) hailing the film for being “steeped very specifically and purposefully in its blackness.”

The article quotes Jamie Broadnax, creator of “pop-culture website” Black Girl Nerds, who enthuses, “It’s the first time in a very long time that we’re seeing a film with centered black people, where we have a lot of agency… [The cast members] are rulers of a kingdom, inventors and creators of advanced technology. We’re not dealing with black pain and black suffering and black poverty.” In other words, Black Panther is a sort of “feel-good” movie, “refreshing” because it focuses on the exploits of a monarch and his retinue and ignores the riff-raff below.

The ecstatic response to Black Panther has a thoroughly scripted character. The reviewers know what is expected of them, and they deliver the desired product. More troubling are those reviews whose authors are deeply and pathologically immersed in the racialist world view that infects the middle-class pseudoleft. Andrew Stewart proclaims in Counterpunch that he does not know how to review this “superb film.” Why? He is afflicted with “the terrifying neurosis of whiteness.” This is, Stewart confesses, “one of the most painful and insurmountable failures” of his life. His life is “a failure because, while I earnestly wish … that I might stop being a racist and white supremacist, I’m never going to totally overcome this.”

One cannot help but feel embarrassed for the author of such self-abasing drivel.

Even if one makes allowances for the comic book aspects of the story and the required suspension of disbelief, there is something ludicrous, to put it mildly, about the assertion that seeing an African king possessed of superhuman strength and agility back-flipping across the screen speaks in some profound way to the situation facing the masses of people, black, white or any other epidermal pigmentation.

While fantasy films and literature depart radically from reality in many ways, the best efforts are rooted in an effort to criticize that which exists and/or consider how society might be reordered to the benefit of humanity. With Black Panther, Coogler and Cole present a supposedly ideal African society, free from colonialism and imperialism, in which nothing makes sense.

Over the film’s more than two-hour running time, there is no effort to explain why a technologically advanced society must conceal itself from the rest of the world behind a wall of invisibility, or why it maintains a feudal form of government, in which a king is chosen through ritual battle to the death or surrender.

Far from employing fantasy to imagine a society more advanced than our own, Coogler and Cole recreate uncritically a political regime that incorporates the worst features of social and political backwardness. The great Wakanda is, in essence, a fragile mono-cultural society in which a military camarilla led by a king hoards its one scarce resource and jealously controls its distribution.

While the distribution of vibranium could apparently have an immense positive impact on the development of humanity, the Black Panther fights to keep it locked away behind the walls of his country, using it only to develop advanced gadgetry and weapons.

This vision of an “ideal” society is a glorified reflection of ex-colonial countries where the benefits derived from control of scarce and valuable resources go to a fabulously wealthy privileged elite.

It is not surprising to learn that Coogler based his vision of Wakanda on what he observed during a research trip to South Africa, Kenya and, most notably, Lesotho, a land-locked constitutional monarchy headed by King Letsie III, where 80 percent of the population relies on subsistence farming and the majority lives in extreme poverty, despite lucrative diamond reserves.

Ironically, Black Panther is most successful in its treatment of the main villain, Erik “Killmonger” Stevens, played by Michael B. Jordan (Fruitvale Station and Creed), a character who ends up being more sympathetic in his cause than the titular hero. Jordan’s portrayal manages to lend complexity and an element of tragedy to a seemingly standard “evil” movie villain.

Stevens has been twisted by the life of poverty he has experienced growing up orphaned in Oakland, California, a nod to Coogler’s hometown and the birthplace of the Black Panther Party. But in order to fit this character in to the storyline’s reactionary framework, it is revealed that Killmonger earned his namesake as a US black-ops specialist, who has decorated his torso with burn marks for each life he has taken in his various engagements in Iraq, Afghanistan and on the African continent.

Jordan explained his motivation for the Killmonger character in an interview with Rolling Stone: “This young black man from Oakland, growing up in systemic oppression, not having his mom and dad around, going to foster care, being a part of this system… I understood his rage, and how he could get to the point where he had to do what he had to do, by any means necessary.”

The most shameful point in the film comes when a Wakandan tribal leader explicitly promotes national isolationism and anti-refugee sentiment, declaring that, “if you let refugees in, you let their problems in.”

On top of this, Coogler couldn’t help but promote illusions in American imperialism with the inclusion of a “good” white character, the CIA operative Everett Ross (Martin Freeman). Ross assists T’Challa in saving Wakanda from Killmonger by remotely piloting a heavily armed unmanned airship, echoing the drones used to kill “enemy combatants” in America’s wars in the Middle East and Africa.

According to star Chadwick Boseman (4 2, Get On Up, Marshall), a major inspiration for the personality of T’Challa/Black Panther was none other than Obama, “a leader [who] can hold his tongue and hold his ground” (Rolling Stone).

Boseman likens the hero’s vibranium battle suit to the United States’ possession of nuclear arms, proclaiming, “‘it’s a similar thing… Who would you want to get the call at three in the morning? I'd rather it be someone like [Obama] or T’Challa than … somebody else.’”

One is not surprised to see journalist Ta-Nehisi Coates, an acolyte of Obama and proponent of the racialist outlook that courses through Black Panther and its marketing campaign, receive special thanks in the film’s credits.