As strike by 1,400 US telecom workers enters third week

As the strike by 1,400 Frontier Communications workers in West Virginia and Virginia enters its third week, the company has stepped up efforts to provoke and intimidate workers.

Frontier workers are striking to defend their health care, and for the expansion of job security to the entire workforce. Presently, 15 percent of the workers are covered by contracts that allow the company to fire them at any time.

On Friday, Frontier won a restraining order against strikers after filing for an injunction accusing workers of “unlawful mass picketing and other strike-related misconduct.” Ominously, the company has also hired agents from the notorious Pinkerton “consulting” firm, as well as Securitas USA, to monitor and intimidate the striking workers.

One Frontier worker told the World Socialist Web Site that at the company's headquarters in Charleston, West Virginia he had seen “four Charleston policemen in front of Frontier at all times.” Adding, “They were paid by Pinkerton. They have now also contracted Securitas at each location, which is the equivalent of a ‘rent-a-cop.’ It makes me leery of the faces I don’t recognize at rallies. We all know that Pinkerton has a bad reputation because of the tactics they use.” 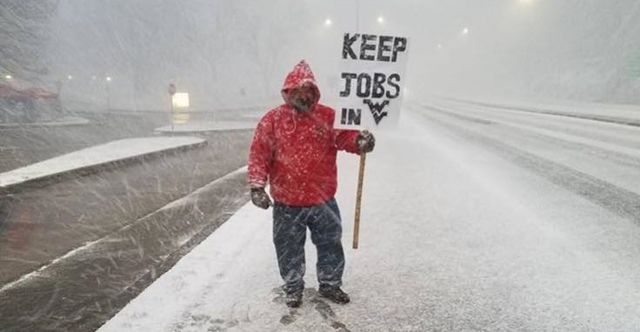 A West Virginia Frontier worker pickets in a snow storm

The request for an injunction filed by Frontier, which yesterday resulted in a court restraining order against workers, relied upon the testimony of Pinkerton and Securitas agents who allege over 100 cases of “abuse” by workers against the scabs hired by Frontier.

Jenny, a Frontier worker in Charleston with nine years, told the WSWS, “My opinion is that the company is making every effort to criminalize us and decrease public support. They are now attempting to portray us as violent and dangerous. We aren’t thugs, we are a hard working family oriented workforce. We have been within our legal rights to picket and they expect this to stifle our determination.”

"The ironic part,” she continued, “is that the scabs have made threats and brandished weapons but we have not. And no one talks about how they were not even licensed contractors in West Virginia until yesterday and still don’t have proper DOT [Department of Transportation] paperwork as well as no background checks.”

On March 6, the third day of the strike, a man from Georgia hired by Frontier as a strikebreaker was charged with a crime after brandishing a nine-millimeter pistol at workers picketing his hotel building and telling them, “don't mess with me.”

And in a video posted to Facebook, recorded by a striking Frontier worker, two strikebreakers can be seen cursing at workers during a “mobile picket.” A mobile picket is a legally sanctioned strike tactic wherein workers can follow strikebreakers when they go to perform a job at a customer location. At the 46-second mark of the video, one of the strikebreakers tells a worker he's going to “put a cap in your ass” (i.e., shoot him with a gun.)

Ashley, another Frontier worker, told the WSWS, “The injunction is ridiculous, because so far we, the mobile picketers, have video of scabs threatening to shoot us, a scab arrested for pulling a gun on a picketer, but all the scabs have are affidavits accusing us of harassment. We are mobile picketing, legally, and they want to put a stop to it.” 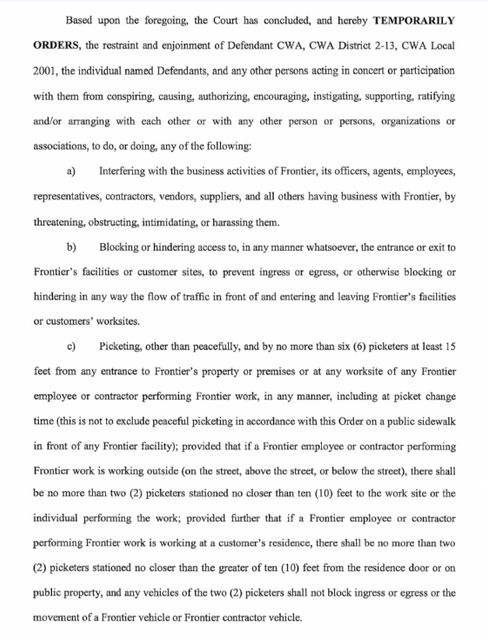 A section of the restraining order against striking Frontier workers

By contrast the Communications Workers of America (CWA) reacted with indifference toward the restraining order. On Friday, the West Virginia Democratic Party posted a Facebook video interview with CWA International Vice President Ed Mooney. Tellingly, Mooney mentioned neither the injunction nor the restraining order. The same day, Mooney mildly characterized the injunction as an “overreaction” by the company.

A worker told the WSWS that communication from the CWA about the injunction and restraining order has been “vague,” adding that on “Thursday night when I was picketing, our local president stopped by and said as long as we followed those rules in all pickets, as well as only one car with two people per mobile picket, then after 10 days [when the restraining order expires] we’d be OK.” Thus, in practice, the union is essentially acting as an enforcer for the restraining order.

Frontier's restraining order limits pickets to six workers per location and bans picketing within 15 feet of a workplace entrance. This not only reduces the visibility of their strike, in some locations it forces workers to stand dangerously close to speeding traffic.

There have been a number of tragedies involving striking workers being run over and killed by speeding vehicles. In 1989, NYNEX telecommunication worker Gerry Horgan was killed while picketing when a car, driven by the daughter of an upper-level manager who had been hired as a strikebreaker, struck Horgan and carried him for over 100 feet on the hood of her vehicle (NYNEX was one of the companies that were later merged to form Verizon).

Horgan left behind a wife and two daughters. However, the driver was never charged in connection with Horgan's death, and police never investigated complaints by strikers that the scabs were driving at high speed through the picket line. Police instead claimed Horgan jumped onto the hood of the car and had planned to charge him with criminal mischief if he survived.

Another near fatality occurred during the 2016 strike by 39,000 Verizon workers in New York City. In May of that year, striking worker James Smith was hospitalized after the parked car he was sitting in was struck by a van driven by a New York City police officer as it sped through the picket line as an escort for strikebreakers. The police van continued without stopping. 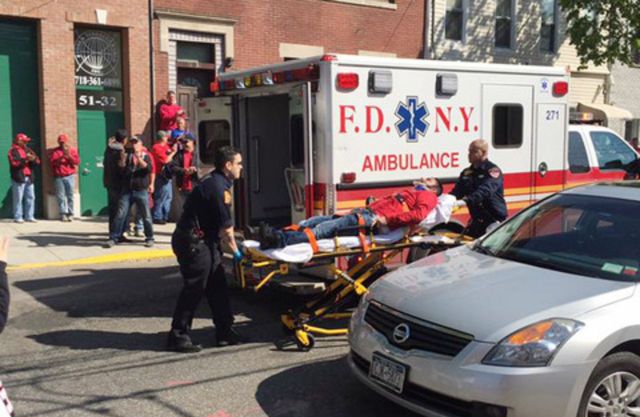 Verizon worker James Smith, after being struck by a police escort for strikebreakers in 2016

New York Democratic Mayor Bill de Blasio, elected with the blessings of the unions, did nothing to hold the police to account. Indeed, de Blasio dispatched hundreds of police to spy on strikers, escort scabs and pen striking workers behind metal barricades.

At the time, the WSWS called the national and district offices of the CWA inquiring what action it planned regarding the NYPD’s violence against workers. The national office would not speak to the WSWS while a spokesperson named “Pete” at the district office advised WSWS reporters that it “would not be a good idea” to pursue the matter.

Vague accusations of “abuse” leveled against workers are a well-worn strike breaking tactic. After a two week strike of Verizon workers in 2011, Dennis Trainor, now CWA Vice President for District 1, signed a back-to-work order that sanctioned the firing of workers for so-called strike “misconduct,” including mass picketing, blocking vehicles and supposed “hate speech” towards strikebreakers. 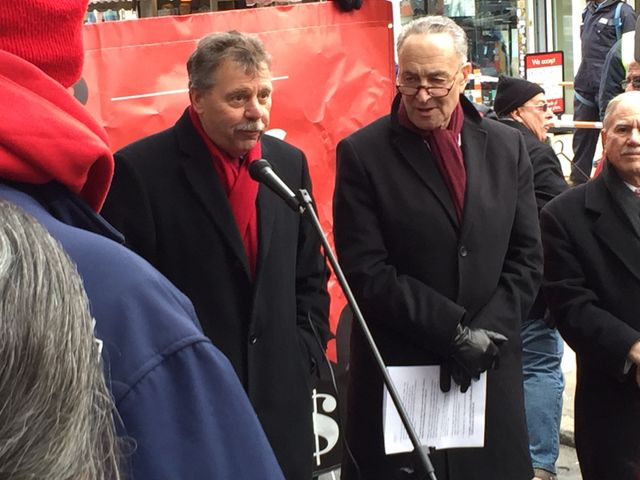 Frontier's restraining order also bans pickets from sheltering near company buildings, forcing workers to expose themselves to the rain, snow and wind. Workers told the WSWS that they were even ordered by the Fire Marshal to remove outdoor propane heaters that they were using to keep warm.

The Frontier workers strike erupted as thousands of West Virginia teachers demonstrated at the state Capitol building in Charleston as part of their strike over crushing health care costs and stagnating wages. But neither the CWA nor the teachers unions did anything to unite the struggles of telecom workers and teachers in West Virginia, even though the capitol building is within eyesight from the picket line at Frontier headquarters in Charleston. On March 6, after nine days, the teachers unions sold out the strike and sent teachers back to work while ignoring their main demand for a fix to their underfunded health care.

The Frontier strike continues as Verizon, which is raking in $3 billion to $4 billion in tax cuts this year due to President Trump's tax cut, is closing six call centers across the country—one-third of its total—and wiping out 3,000 customer service jobs. Yet The CWA has done nothing to broaden the strike to these other telecom workers that it officially represents, let alone appeal to other sections of workers, who are entering into struggle across the country and around the world.

The WSWS will lend every assistance to telecom workers seeking to link their struggles with other sections of the working class. We urge striking Frontier workers to become regular readers of the WSWS and help circulate our articles widely.