Claire Kober, the former leader of Labour-run Haringey Council in London, has a new job. The announcement that she has taken up the post of director of housing at the housing management group Pinnacle confirms entirely the Labour Party’s role as a tool of the corporations.

After a decade leading the north London council, Kober, a member of the right-wing Blairite faction of the Labour Party, announced in February that she would be standing down at the May election. This, she said, was because of “threats, bullying, sexism and intimidation” by “left-wing” Labour activists allied to party leader Jeremy Corbyn.

Her resignation followed intense local opposition to the council’s proposal for the largest ever transfer of social assets—council housing, schools, clinics and commercial buildings worth £2 billion—to the Haringey Development Vehicle (HDV), a 50-50 partnership with global private developer Lendlease. The proposed redevelopment scheme would see the demolition of 1,400 council houses on seven council estates and their replacement by luxury developments and supposedly “affordable” properties. While these would be well out of the reach of most local working class residents, the scheme would make vast profits for the corporations involved.

As a result of local opposition, many Labour councillors who had supported HDV were deselected by their party branches. But these council members, who had become ineligible to run for Labour in the May elections, along with others who had already announced their intention to resign, voted to push through HDV at their last meeting. This was facilitated by the “left” councillors affiliated to the Momentum campaign backing Corbyn. Selected for their stated opposition to HDV, they absented themselves from the meeting so as not to conflict with the Blairites. HDV was carried by two votes.

So transparent was the anti-democratic character of the move that even Labour’s National Executive Committee felt obliged to issue a token response. It politely requested that Kober and her Blairite supporters reconsider the policy.

Instead, Kober announced that she would resign after the May elections and immediately found enthusiastic press platforms for her tales of bullying and her justifications for her reactionary policies. Writing in the Financial Times, she described opposition to “creativity, innovation and good old-fashioned financial management” as a “clash between the politics of pragmatism and the politics of ideology the like of which hasn’t been seen for 35 years.”

As the World Socialist Web Site noted, “HDV in fact epitomises the transformation of the Labour Party into a political adjunct of big business and the corporate elite.” The WSWS drew attention to Kober’s “vested interest in concealing… [the] revolving door between Labour and the property developers,” especially in London with its astronomical land and property prices.

For all Kober’s handwringing about her treatment, her appointment at Pinnacle confirms this appraisal. When Haringey was deciding with which developer it would partner in the HDV, Kober flew to a property fair in Cannes, France to meet various bidders. On the short list, losing out ultimately to Lendlease, was her new employer Pinnacle.

Pinnacle Group describe itself as “a family of businesses providing a comprehensive and integrated range of services to communities and their private and public sector partners.” Its “focus on delivering solutions with positive outcomes for the communities we serve” boils down to an active role in privatisation under the guise of corporate management of public assets.

For all the bland corporate phrases, the policies of gentrification are clear enough. According to the company statement, the firm operates with the most altruistic motives, “Whether we are transforming existing communities by working with them to enrich the tenure mix and improve the collective and individual experience, or creating new communities of upwardly-mobile tenants around a shared lifestyle vision…”

Kober’s “leadership skills and her experience as an innovator” were praised by Pinnacle. Perry Lloyd, the group’s chief executive, cited her understanding of the housing sector as “exactly what we need to develop our housing management services division.”

Pinnacle has been involved in the privatisation of council resources since 1994, when it took on a housing management contract with Conservative-run Westminster City Council. In 2002, Pinnacle formed a joint venture, Regenter, with construction giant John Laing to bid for Private Finance Initiative (PFI) contracts. PFI was launched as a privatisation measure under John Major’s Conservative administration, but it was pushed most heavily by the Blair/Brown Labour governments.

Those suffering the effect of PFIs were not enamoured by the results, unlike the corporations profiting from them. By 2010, the Brockley PFI Leaseholders Association was complaining of what sounded like extortion for substandard work. The Association’s Patrick McGinley told local blog Brockley Central that they felt the work for which they were being forced to pay was overpriced, with more than a quarter of the cost taken up in professional fees and 10 percent in management fees. McGinley said they were given no hourly rates in quotes for the work, as this was deemed “commercially sensitive information.”

McGinley reported that leaseholders told the cost of the required work, in some cases up to £10,000, and then given just one month to find the money. The association also said much of the work was substandard, as the contract punished Regenter for failing to meet deadlines but provided no quality control. They said they felt that Lewisham council had “divested itself of any responsibility towards them.”

As with other “regeneration” projects, the working class is excluded from the claimed improvements. “Regeneration” is the preferred term of Pinnacle et al, rather than gentrification, because the latter term is too close to the reality of the social cleansing taking place. However, those enduring it recognise it for what it is. The “Stop Regenter Brockley PFI” Facebook page shows two banners outside a court where Lewisham Council were evicting a young mother, identifying the problem and the real guilty party. The banners read “Social Housing not Social Cleansing” and “Pinnacle=Slum Landlord.” 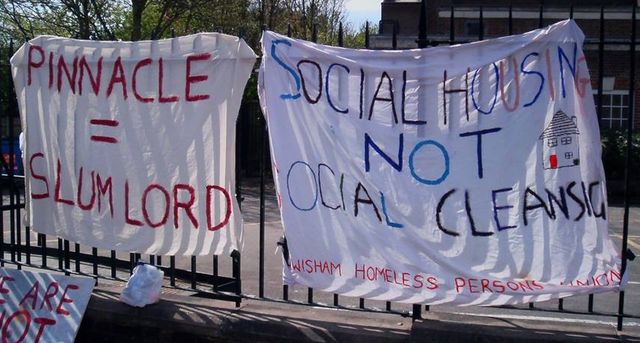 In nearby Lambeth, a report by Zoe Williams for the Guardian into Myatts Field North offers another example. A PFI was agreed in principle in 2005, with 477 council homes to be refurbished and rebuilt alongside a private development of 398 flats. Regenter were named preferred bidder in 2009, with Pinnacle PSG, Rydon, Higgins and E.ON the main subcontractors.

Rydon have since become notorious as the main contractors chosen by Conservative-controlled Kensington and Chelsea council for the 2014-2016 refurbishment of Grenfell Tower, in which highly flammable cladding was fitted to the building. This was a critical factor in the inferno that destroyed the building and took at least 72 lives in last June’s fire.

The Myatts Field North PFI was signed in 2012, although the agreed funding for the project had been cut by £16.8 million a year earlier. The council’s repayments shot up and the repayment schedule was shortened to 25 years. To make up the shortfall, Lambeth gifted land worth at least £8 million to Regenter and allowed the company to increase the number of private homes in the development. In exchange, Regenter reduced its charges by £2.7 million.

On top of the contract’s costs, the procurement cost Lambeth Council around £5 million, funded by council tax payers, to deliver between 2005 and 2012.

As the evolution of Kober and many other Labourites demonstrates, Labour’s enthusiastic embrace of privatisation serves as the basis for lucrative careers for Labour politicians once they leave elected office.

Starwood is a major player in real estate globally, with around £40 billion of properties on its books. A Daily Telegraph article on the buyout noted, “Tunstall and Starwood’s backing is likely to boost the amount of capital Pinnacle has access to, to allow it to target large-scale regeneration projects.” It cited the comments of Roger Clarke, chief executive of Tunstall and a former investment banker, who said, “In partnership with the public sector, we look forward to providing much needed new homes, as well as the regeneration of communities across London.”

Corbyn’s constant mantra is for party “unity” with the entire “Labour family,” which means opposing any fight against Kober and the many other Kobers who remain in the party’s ranks in local government and on Labour’s leading bodies. Kober’s new career move only too clearly demonstrates what the refusal of the Corbynites to mount any struggle against the Blairite right actually means.