The Great Barrier Reef, one of the great natural wonders of the world, is being damaged and destroyed by the combined impact of global warming, pollution and over-exploitation. But a recent study by Professor Terry Hughes and his colleagues from James Cook University in Townsville, Australia, revealed that global warming is playing the primary role in the reef’s degradation.

The reef is in the Coral Sea, off the coast of the Australian northeastern state of Queensland. It is the largest coral reef in the world, consisting of 2,900 individual reefs and 900 islands, spread over 2,300 kilometres. It is considered one of the planet’s richest and most bio-diverse habitats. 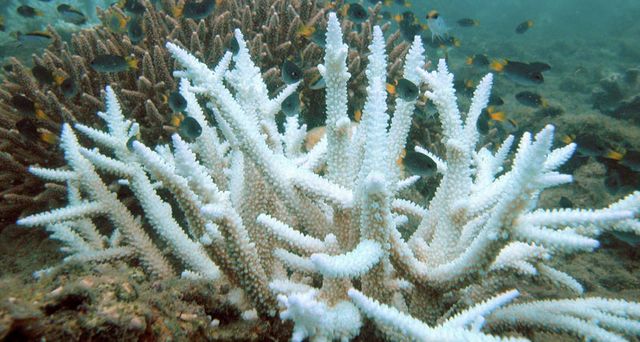 Hughes’ team conducted a major study of the reef in 2016, examining mass coral bleaching events in 1998, 2010 and 2015-2016. Bleaching occurs due to stress during heatwaves. The 1998 and 2015-16 events were exacerbated by El Niño, but subsequent bleaching in 2017 occurred without its effects. El Niño is a broad weather pattern associated with shifts in ocean currents and atmospheric conditions over the Pacific and is usually accompanied by rising temperatures in Australia.

Global surface temperatures during the first six months of 2016 were the warmest since records started in 1880, according to scientists at NASA’s Goddard Institute for Space Studies. The six-month period was also the warmest half-year on record, with an average temperature 1.3 degrees Celsius (2.4 degrees F) warmer than the late 19th century.

Extreme heat disrupts the symbiotic relationship between corals and their algal symbionts, which give the corals their colour and provide food. The heat drives the algae out, resulting in the coral bleaching from starvation, and ultimately dying if the situation is prolonged.

Hughes’s study was unprecedented in its scope. It involved the use of satellite imagery, an aerial survey and dives at 63 locations along the reef in early 2016, which was then repeated nine months later.

The study concluded that the 2016 bleaching was more extensive and more severe than in earlier bleaching events. The proportion of the reef experiencing bleaching was over four times higher than in 1998 and 2002. Only 9 percent of the 1,156 reefs that were studied escaped with no bleaching.

Many corals, particularly in the northern third of the reef, died rapidly without experiencing substantial bleaching—suggesting death occurred due to the sustained extreme heat. This was the first time this phenomenon was reported on such a scale. The demise of the coral population has a disastrous impact on fish species and invertebrates that live on the reef, as they use the corals as refuges.

“The conventional thinking is that after bleaching corals died slowly of … starvation,” Hughes stated. “That’s not what we found. We were surprised that about half of the mortality we measured occurred very quickly … In fact, many of the corals died in two to three weeks—essentially cooking to death.”

Warming events are becoming more frequent, giving coral insufficient time to recover. It takes coral between 10 to 15 years to recover from bleaching and much longer for more heat-sensitive species. Approximately one third of coral reefs globally experienced bleaching in 2016.

According to Hughes, the number of years between severe bleaching events has decreased fivefold in the past four decades, from once every 25 to 30 years in the early 1980s, to once every 5.9 years in 2016.

The report concluded that the chances of the reef returning to its pre-bleaching status are slim, due to the extent of the 2016 event and the probability of subsequent extreme warming because of the continued rise in global temperatures.

The study showed that global warming is the greatest cause of the degradation of the reef, with local management of water quality and fishing pressure having little impact.

“Securing a future for coral reefs, including intensively managed ones such as the Great Barrier Reef, requires urgent and rapid action to reduce global warming,” it stated.

Hughes called the 2015-2016 bleaching event a “watershed for the Great Barrier Reef” and other reefs across the Indo-Pacific region. He predicted that reefs throughout the tropics will continue to degrade unless climate change stabilises and allows more heat-tolerant species to establish themselves.

“The Great Barrier Reef is certainly threatened by climate change, but it is not doomed if we deal very quickly with greenhouse gas emissions. Our study shows that coral reefs are already shifting radically in response to unprecedented heatwaves,” Hughes said.

Prime responsibility for the reef damage has to be placed on the corporate and political elite internationally for refusing to take any meaningful action to curb greenhouse gas production. According to the World Meteorological Association, the 2016 heatwave was caused by unprecedented levels of greenhouse gases, attributable primarily to human activity, and the effect of a strong El Niño.

The Paris agreement signed in 2015 did not commit any of the 196 signatories, including Australia, to anything. Greenhouse gases and global temperatures have continued to rise as a consequence.

Australian Prime Minister Malcolm Turnbull initially denied any damage to the Great Barrier Reef. He said in January that the reef is “alive” and “resilient,” declaring that “there is a lot of negativity out there.” This month, for electoral reasons, his government’s budget promised $444 million to improve the resilience of the reef, tackle water quality and control the crown of thorns starfish, which eats coral.

Even if the promised spending ever eventuates, such actions are merely palliative if the question of global warming remains unresolved. Furthermore, the government bypassed the Commonwealth Scientific and Industrial Research Organisation (CSIRO) and the Great Barrier Reef Marine Park Authority, which is charged with overseeing the wellbeing of the reef system.

Instead, the money was earmarked for the Great Barrier Reef Foundation (GBRF). The GBRF has numerous ties to profit-driven corporations such as mining giants BHP and Rio Tinto and the National Australia Bank. The GBRF is chaired by John Schubert, a businessman who was formerly the head of the Business Council of Australia and the managing director of the oil exploration company Esso Australia.

The opposition Labor Party and the Greens are equally complicit in the ongoing decline of the Great Barrier Reef. Both peddled the lie that greenhouse gas emissions could be reduced through the market via a carbon trading scheme. In fact, such systems set up valuable opportunities for business to profit without curbing emissions at all.

Scientists understand how global warming can be reversed. However, the necessary, economic, social and political changes needed to reverse climate change cannot occur while every aspect of society is subordinated to the accumulation of private profit. What is urgently required is rational and scientific planning on an international scale.

The Great Barrier Reef and other precious coral reefs internationally can be protected only through the abolition of the capitalist profit system.

Climate change and the struggle against capitalism
[14 July 2017]