The first anniversary of the Grenfell Tower fire on June 14, 2017 drew thousands of people to events in London and around the UK.

People began gathering outside the tower on the Lancaster West estate in west London from the early hours of Thursday morning—marking the exact time that the fire started—to honour the 72 victims and the survivors. The burned-out husk, now concealed behind a white surround, was lit in green, which has become the symbolic colour of Grenfell.

At noon, a national 72-second silence was observed in remembrance of the victims.

The mood of many was captured in a video tweeted by Sky News, showing the moment on Thursday that a London Underground tube driver briefly stopped his train on the bridge at Latimer Road station—only yards from the tower—and got out of his cab to wave a green flag to hundreds who had gathered below. Shouting his support to the crowd, he was cheered in response. A video of the incident has been viewed over 1.3 million times on Twitter.

Later that evening, up to 10,000 people gathered for the monthly Silent March by the Wall of Truth—set up under the Westway flyover near the tower by local residents fighting for justice for the Grenfell victims—before it made its way to St. Marks Park in Kensington.

By 7 p.m., the Wall of Truth area and local high street was packed out, as people joined from across the capital and further afield. Many stood outside apartments adjacent to Grenfell Tower, waiting to join the march or watch proceedings. A majority wore green and brought flowers and lit candles for those who perished.

Various locations in the immediate vicinity of the tower have been transformed into memorial areas over the year, and participants stopped at these to pay their respects. Demonstrators carried placards reading, “Justice for Grenfell: We demand the Truth.” One held up a placard reading, “Say their Names: Justice for Grenfell,” with the name and ages of each of the victims listed. 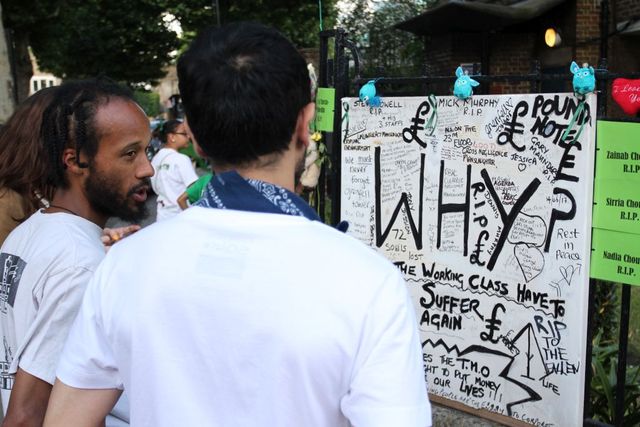 Commemorative Silent Marches and vigils were held simultaneously in towns and cities throughout the UK, including in Birmingham, Sheffield, Bradford, Bristol, Liverpool, Salford, Bolton, Glasgow, Edinburgh and Dundee. More events are to be held over the weekend.

The response shows the enormous sympathy and solidarity of workers and youth nationwide with the Grenfell victims. Too many workers live in similar potentially deadly conditions, including in high-rises covered in the same flammable cladding as Grenfell.

There is widespread anger at the refusal of the Tory government and local Royal Borough of Kensington and Chelsea council to assist the devastated local community in the aftermath of the fire. Aware of this sentiment, the decision was made to bathe the prime minister’s official residence in Downing Street and other government departments in green light.

These are the same politicians and institutions whose policies of deregulation and savage budget cuts centrally and locally, carried out over decades, caused the Grenfell tragedy.

Corbyn’s denunciation could, however, be equally levelled against Labour councils, who run the local authorities in every major urban area in the UK and have imposed Tory cuts.

Moreover, Corbyn and Dent-Coad are backing the government-convened inquiry, which has specifically ruled out any examination of the social and economic factors behind the fire.

Socialist Equality Party campaigners received a warm response as they distributed around 1,000 copies of the SEP statement on the anniversary of the fire. Many people came to the SEP’s stall and took this and other materials on the fire and its aftermath produced by the SEP over the last year. 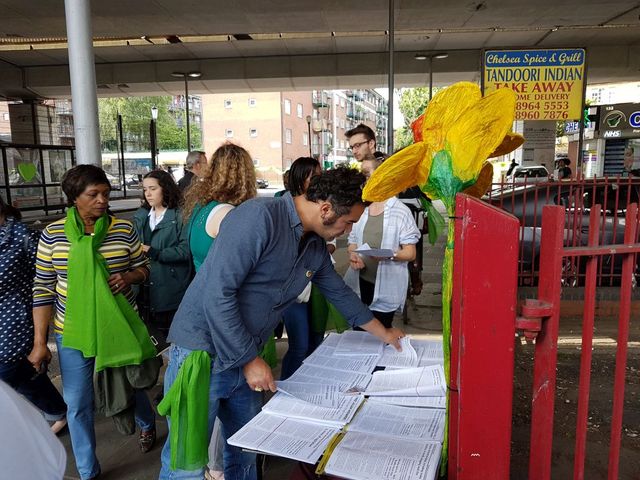 Among the leaflets being distributed was a statement calling for attendance at the June 19 vigil to be held at the Ecuadorean Embassy to demand the freedom of WikiLeaks editor Julian Assange.

The embassy lies just four miles from Grenfell Tower and in the same Royal Borough of Kensington and Chelsea. Assange has been forced to shelter in the embassy for six years to prevent plans to extradite him to the US on espionage charges, which carry the death penalty.

Many told the SEP they supported Assange and understood the connection between the corporate media’s attempt to discredit and silence those seeking to establish the truth about Grenfell and the attempts to railroad the WikiLeaks founder.

One woman who passed the stall took 20 of the leaflets on Assange and said she would try to put them in her local library.

Also typical of the response was from Steven, who lived on the Lancaster Estate in north Kensington, adjacent to Grenfell Tower, and who witnessed last year’s inferno.

His flat was the “fourth nearest to Grenfell tower out of an estate of 10,000 people.” Due to the indifference and callous attitude of the Royal Borough of Kensington and Chelsea council, it took Steven six months to be rehoused. He has still not recovered from the trauma caused by the fire and the council’s response.

He told the WSWS that “Sweden had dropped the case against Assange so the bail charges from the UK authorities should be dropped. They’re not worth the back of a cigarette box. Assange needs public support to get safe passage out of the embassy to Australia.” 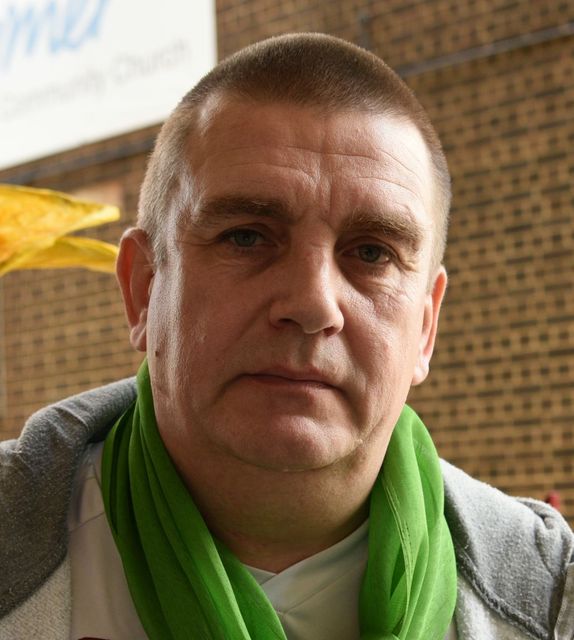 Mark also witnessed the Grenfell fire from his bedroom window. “A friend phoned me from Ireland. I looked out the window and got the shock of my life. The fire went up diagonally as if it was cardboard.

“The fact that no one had been arrested in connection with the fire is ‘criminal.’ Anyone who is involved in this should be prosecuted, especially those who are telling the fire brigade to keep their mouths shut about it. I think there should be a criminal court case, and people should be remanded in prison until it’s done.

“If I was to burn a few pieces of paper here, I would get done for arson. I would be in prison straight away. They will probably get pensioned off. In the worst-case scenario, they are going to get a pension for the rest of their life.”

Mark expressed sympathy for Assange, saying, “I believe he speaks the truth. He knows the secrets which they don’t want us to know, and he has revealed a few of them. What the Americans are doing is criminal. They know what he is doing and they want to eliminate him. They don’t want him extradited, they want him dead, they want him shut up.”

Ruby lives in London and is a supporter of justice for the victims of the Grenfell fire. She told the WSWS:

“Pressure should be put on Australia to bring him [Assange] home. The Australian embassy should just come and get him. For breaking bail, that should be a slap on the wrist … but he reckons they’ll extradite him to America and kidnap him. He used to do a lot of work, finding out pieces missing out of the jigsaw, the government’s hidden the pieces all over the place. War is all covered up, nobody knows what they’re fighting for. He used to do a lot of work exposing the truth.” 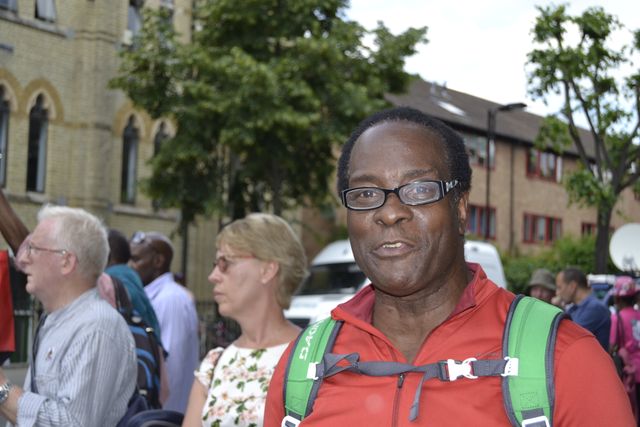 Shirvin is a human rights activist who has been campaigning for justice for the victims of the Grenfell fire since it happened.

“We all know Assange has been framed up,” Shirvin said. “We know he has been framed by big governments because he has told the truth to allow the normal man and woman to understand what the government is doing to them, what the media are doing, what [billionaire media oligarch Rupert] Murdoch is doing.

“We are told we have freedom of information, but it’s not. Look at it this way, do they want people to know? They don’t. The rich support the rich. We need to know the truth about the Iraq war and the Libya war. The Libya war was a crime against humanity, it was genocide.”

The Grenfell Fire Forum, initiated by the Socialist Equality Party, will be holding the next of its regular meetings on Sunday June 17, at 2 p.m. at the Maxilla Social Club in North Kensington, London. All are welcome to attend.