Under the slogan “Stop the deaths in the Mediterranean,” tens of thousands demonstrated in Germany on Saturday against the savagely inhumane refugee policy of the federal government and the European Union. In Berlin, over 10,000 people demonstrated, more than ten times as many as the organizers of the coalition “Seebrücke” had originally expected. Demonstrations also took place in Hamburg, Hanover, Bremen and a dozen other cities in Germany.

The high level of participation is particularly significant because the initiative was launched only a week earlier by refugee aid organisations. The protests were organised within the space of a few days almost exclusively via social media.

Protesters at the Neptune Fountain in Berlin

The immediate trigger for the protests is the persecution of Claus-Peter Reisch, the captain of the lifeboat Lifeline, and the man who, together with his crew, saved the lives of 234 refugees who faced death by drowning in the Mediterranean in June. The ships and aircraft of the aid organization have since been detained in Malta, where Reisch faces criminal charges. He has been released on bail.

The Facebook page of the “Seebrucke” reads: “Allowing people to die in the Mediterranean in order to advance the isolation of Europe and carry out political power struggles, is unbearable and contravenes all humanitarian principles…Migration has always been part of our society! Instead of closing borders, we need an open Europe, solidarity cities, and safe havens.”

The demonstrations were fuelled not only by indignation at the brutal crackdown on those who risk their own lives to save people from drowning. Those taking part also condemned the so-called “Master Plan” for refugees proposed by German interior minister Horst Seehofer, as well as the recent EU summit, which called for setting up a comprehensive system of camps across Europe.

Many protesters came with homemade posters and banners reading, “Sea Rescue instead of Seehofer”, “Imagine your family was sitting in the boats”, “The dignity of people is inviolable”, and “What should we say when we are called to account in the after-life?” The Seebrucke organization also distributed several hundred lifejackets to participants in a symbolic gesture.

In discussion with those taking part, there was virtually unanimous opposition to any more restrictions being placed on the right of asylum, and to all the obstacles put in the way of refugees to prevent them from entering safe host countries. Many participants not only rejected the policy of the governing parties, the Christian Democratic Union, Christian Social Union and Social Democratic Party, but also criticized the other parties represented in the Bundestag, including the Left Party.

Wolfgang and Irene from Berlin, both in their mid-40s, told the WSWS that they wanted to make a stand against the inhumane policies of governments in Europe. “The isolation of Europe is incompatible with human rights,” Irene said. Wolfgang added: “None of the parties is committed to the protection of refugees and asylum seekers. I also find the position of sections of the Left Party to be disgusting, when they describe refugees as ‘guests’ who can be rejected if they behave incorrectly.” He was referring to statements made by the parliamentary chair of the Left Party, Sahra Wagenknecht. “Just like the CDU/CSU, SPD and Greens, they (the Left Party) are also sending refugees back when they are part of the government, as is the case in the states of Thuringia and Berlin.” 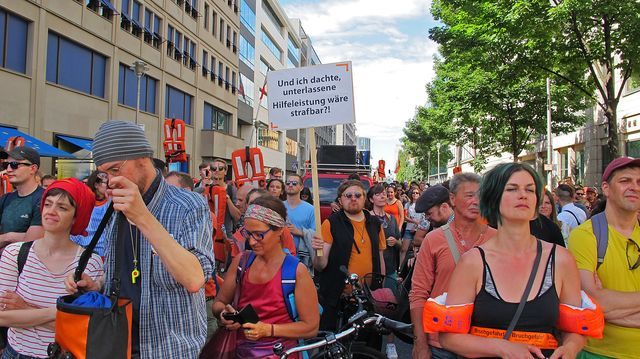 Philip, a young worker, told our reporters that he had spent an hour and a half traveling to Berlin to attend the demonstration. “The obstruction of rescue operations by the European Union contradicts the basic values of humanism. After plundering countries throughout the Middle East for raw materials and finally destroying them with wars, they are now letting the fleeing population die in the Mediterranean.” When asked about the causes of this disaster, he added, “Of course, this has to do with the capitalist economy, company executives are profit-oriented, they follow the laws of the system. The governments back this up militarily.”

Many participants came to the demonstration for basic humanitarian considerations. Till from SOS Mediterranee (an aid organisation from France, Italy, Germany and Switzerland), which has operated the Aquarius rescue ship for three years, complained about the massive impairment of aid operations which are refused docking facilities in the Mediterranean. “The Aquarius is now in the port of Marseille and cannot sail because of the uncertain situation. A few weeks ago, our ship with 630 people on board was prevented from docking in Italy. We then had to sail to Valencia in Spain. Only then were we accepted.”

In the course of the past year. the obstruction of aid ships and the journalists on board has been deliberately stepped up, Till said. “When no one reports anymore and when people no longer see the pictures, then refugees die unknown and unseen. This makes it easier for governments to enforce their asylum plans.”

Till saw parallels between the refugee camps in Europe and North Africa, which are now to be further expanded by the EU and the German government, with the 1930s: “It is shocking how quickly these parallels can be drawn today. Sinti and Roma are being registered, and one sees that humanity in government circles is no longer an issue today. Human rights are violated without an outcry. That's why it’s time to say today, ‘enough is enough!’” 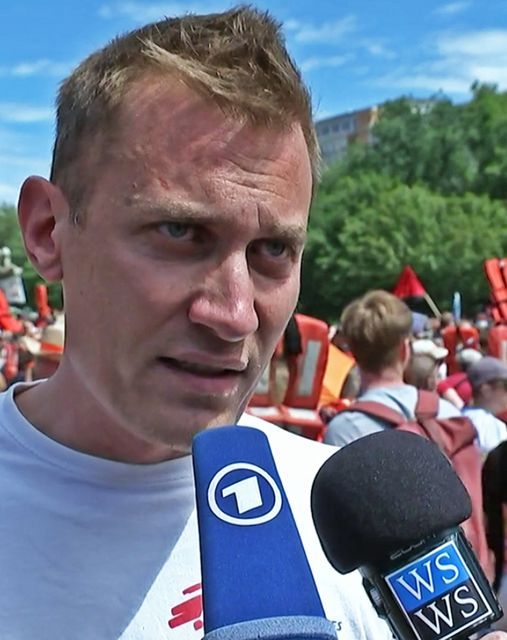 Sebastian Jung from Doctors Without Borders

Sebastian Jung is project coordinator of Doctors Without Borders (Médecins Sans Frontières, MSF) which supported the protest. He reported on the unspeakable cruelty of the internment camps in Libya at the rally in Berlin. In an utterly shattered state, refugees, forced to undertake marches across the desert, often fell into the hands of traffickers, who took them to their own unofficial internment camps, where torture and intolerable conditions prevail. MSF has no access there.

Jung was active in the official refugee camps, which were set up in warehouses and are actually the worst sort of prisons, where people are detained 24 hours a day. The halls are overcrowded, with barely a square meter of space per refugee. When describing a conversation he had had with one MSF-treated asylum seeker, Jung could barely control his emotions.

Following horrific torture, the man’s legs and some fingers had to be amputated. “Extremely overcrowded cells and poor sanitation increase the spread of illnesses such as rashes, diarrhea and mental suffering due to the horrors experienced before they arrive at the camps,” he told the WSWS. “You cannot overcome a psychic trauma in a closed camp.”

MSF is currently working in five so-called internment camps in Tripoli, where it provides emergency medical care. The situation in these camps is critical because they are often overcrowded, and sanitary conditions are bad. “There is a direct correlation between the poor health of people and the type of housing. They also have no legal counsel and are detained arbitrarily for months on end,” he added.

In general, the perspective of many participants remained limited to finding some sort of immediate solution to the problems that impelled them to protest. A member of Seebrucke, Gonzalo, who attended an IYSSE meeting at the Humboldt University on the same topic, called upon German Chancellor Angela Merkel to respect the “C”, i.e. the “Christian” in the name of her party. He expressed the hope of many participants that pressure on the political elite through demonstrations and public actions could bring about a change in politics.

In fact, a solution to the refugee crisis cannot be achieved within the decaying capitalist system, which is responsible for the wars and social depredation which cause millions of people to flee their homelands. The leaflet distributed by representatives the Sozialistischen Gleichheitspartei (Socialist Equality Party, SGP) at the demonstration in Berlin, stated:

“The fact that the EU and all the governing parties in Europe—from the pseudo-left Syriza in Greece, to the grand coalition in Germany and overtly far-right governments in Italy, Austria and Eastern Europe—are all pursuing austerity policies and terror against refugees, makes clear that workers and young people are confronted with revolutionary tasks. European capitalism cannot be tamed, but must be overthrown and replaced by the United Socialist States of Europe.”