Thirty years after the Hawke Labor government’s 1987–91 “Royal Commission into Aboriginal Deaths in Custody,” the state brutality and killing of indigenous people in Australia continues unabated.

According to figures published last week by the Guardian, 147 Aborigines, including children, have died in custody over the last ten years, bringing the total number of indigenous people who have lost their lives in custody to 407 since the royal commission.

The Guardian report is based on a detailed study of hundreds of coroners’ inquests between 2008 and 2018. The newspaper decided to undertake the investigation because federal, state and territory authorities have failed to maintain up to date records on the number of indigenous deaths in custody. 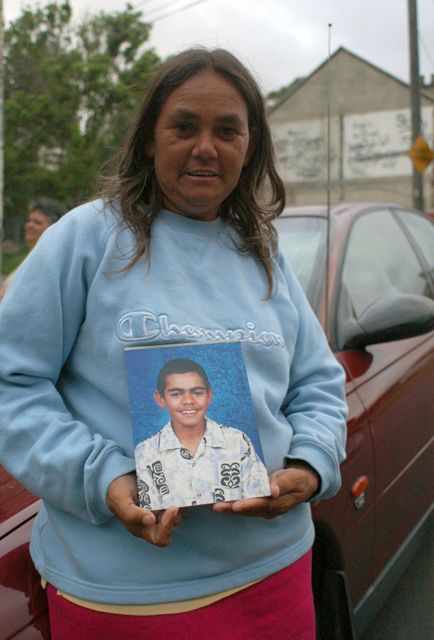 Gail Hickey, whose son T. J. died during a police pursuit in 2004

Australian Aborigines are the most incarcerated people in the world. Only 2.8 percent of the Australian population identifies itself as indigenous but they constitute 27 percent of the total number of prison inmates, 22 percent of deaths in prison and 19 percent of those killed in police custody.

The Guardian investigation features an online searchable database Deaths Inside and notes that more than half of the Aborigines who died in custody since 2008 had not been convicted of a crime. Most were suspected of non-indictable offences, ranging from public intoxication, to evading police and other repressive laws used by police to harass and detain Aboriginal people.

The database includes the example of 46-year-old Mr Ward who died of heat stroke in late January 2008, after being transported 360 kilometres through the Western Australian outback in the back of a police van with faulty air conditioning. Ward was admitted unconscious to hospital where he died. He had a severe burn on his side from lying on the extremely hot metal floor of the vehicle. GLS, the transport company used by Corrective Services, and two GLS employees, were later fined by Worksafe.

The report points to “stark differences in the medical care Indigenous people receive” compared to their non-indigenous counterparts. Half of the Aborigines who died had treatable medical conditions, including diagnosed mental health conditions or cognitive impairments, such as a brain injury or foetal alcohol syndrome disorder, but did not receive the necessary care.

The most common officially reported descriptions of the causes of death in the database are “Medical episode following restraint” or “Medical care required but not all given, procedures not all followed, force used.”

On December 30, 2008, a 24-year-old Aboriginal man, referred to as HN, died in the Royal Perth hospital three days after being bashed under the security cameras of a service station in Broome, Western Australia. HN was still unconscious when police arrived and arrested both his brother and the man who had attacked them. When HN regained consciousness, he was also arrested and taken to Broome hospital but did not receive a brain scan. An autopsy later revealed that HN had extensive skull fractures and intracranial haemorrhaging. He left the hospital against medical advice and was arrested again by a police officer who thought he was “good as gold” to be held in custody.

Police watch-houses, prisons and alcohol detention centres, the Guardian reported, failed to follow their own basic prevention of suicide procedures. Prisoners known to be at risk of self-harm were held in cells with hanging points, or placed in cells alone, despite numerous recommendations made by coroners that hanging points be removed from prisons and police watch houses.

In 2010, TLI, an Aboriginal woman with a chronic injury and a tooth abscess, was denied pain medication for six weeks after being transferred to Townsville women’s prison in Queensland. Her medical records were not sent to the jail with her and authorities, apart from providing mild painkillers, insisted she did not need pain relief. Six weeks after transfer, she took her own life. The coroner found the pain was “a contributing factor in her despair” during her final weeks.

The Guardian database references the case of 22-year-old Julieka Dhu in Western Australia. She was arrested on August 2, 2014, for unpaid parking fines and violently assaulted by several police officers at South Hedland police station.

Dhu was dropped on the cell floor when she could not stand up, dragged along the floor, and then carried, handcuffed and shackled, to a police van because she could not walk. Police told her she was “faking it” and berated her as a “f…ing junkie.” Dhu died on August 4, from septicemia and pneumonia caused by an infection in a rib broken by her violent partner some weeks before. 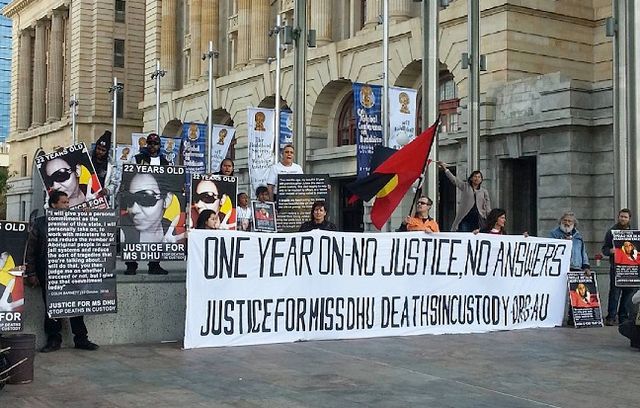 Protest over the death of Julieka Dhu

In another case, Kumanjayi Langdon, 59, died of heart disease in May 2015 while lying on a concrete bench in a Darwin police cell. He had been drinking in a park and was picked up by police under the Northern Territory’s “paperless arrest” laws. Introduced in 2014, the laws allow police to arrest and detain people for up to four hours. The coroner ruled that Langdon “was treated like a criminal and incarcerated like a criminal; he died in a police cell which was built to house criminals.”

Later that year, in October, police were sent to Kingston in Queensland to “restrain” Shaun Coolwell, who they claimed was having a “violent drug-induced episode” and behaving in an "uncontrollable" manner.

Coolwell was pinned down by police who handcuffed him while paramedics injected a chemical sedative. He began to have breathing problems, lost consciousness and died in hospital a few hours later. An internal investigation by Queensland police cleared the officers of any wrongdoing and found they had used “the minimum force required.”

These incidents are just a small sample of the horrifying and tragic reports in the Deaths Inside database. The investigation also revealed that most of the families of those who had died in custody were treated with contempt by state authorities, who delayed telling the next of kin. One father only found out that his son had died when another prisoner called him. Grief stricken families of victims have had to wait for years before coroners’ inquests were even commenced.

Last week Pat Dodson, an Indigenous Labor Party senator and one of the “Deaths in Custody” royal commissioners, declared that Australia was “going backwards as a nation” and denounced the Liberal-National federal coalition government. Dodson’s statement is disingenuous and a crude political diversion.

The increasing number of Aboriginal deaths in custody have occurred under Liberal-National and Labor governments—state, federal and territory alike.

In the aftermath of the royal commission, the entire political establishment, including figures like Dodson and other Aboriginal leaders, the Greens and pseudo-left organisations, claimed that the various cosmetic recommendations made by the commission would “end” the state-sanctioned carnage.

Every official investigation into the deaths in custody of Aborigines, including the 1987–91 royal commission, however, has been a whitewash. The recommendations and cosmetic changes advanced at various times have done nothing to change the plight of Aborigines, the most oppressed section of the Australian working class, but provided a licence for state authorities to continue the repression.

The growing number of Aboriginal deaths in custody runs parallel with the enrichment of a small elite of indigenous bureaucrats, academics and entrepreneurs who claim that racial oppression is the product of “white society” not the capitalist system. There is a widening economic gulf between this milieu and the vast majority of Aborigines.

The ongoing state-repression and economic degradation inflicted on Aboriginal workers and their families are just the most graphic expression of the social onslaught being carried out on all sections of the working class by big business governments in every country. The only way to fight this is through the development of a socialist movement that unites all working people, Aboriginal and non-Aboriginal alike, in a fight to put an end to the profit system.

Australia: Questions emerge over another Aboriginal death in custody
[9 October 2017]