Eleven days after Hurricane Florence made landfall in North Carolina, rivers are continuing to surge as a result of record rainfalls, forcing more evacuations in the Carolinas and threatening to poison water supplies with coal ash and hog waste.

According to official estimates, the storm has already killed 43 people across the states of North Carolina, South Carolina and Virginia. It unleashed record rainfalls in the Carolinas, dumping nearly 8 trillion gallons of water there, with another tropical weather system heading to the region this week.

Hundreds of roads in North Carolina remain closed, thousands of residents remain out of their homes and hundreds are still being rescued from rising waters. Estimates of property damage are in the range of $50 billion.

The areas around Conway and Georgetown in coastal South Carolina continue to see massive flooding as the Waccamaw, Great Pee Dee, Lynches and other rivers surge. On Monday, authorities in Georgetown County called on some 8,000 residents to evacuate and opened two shelters. 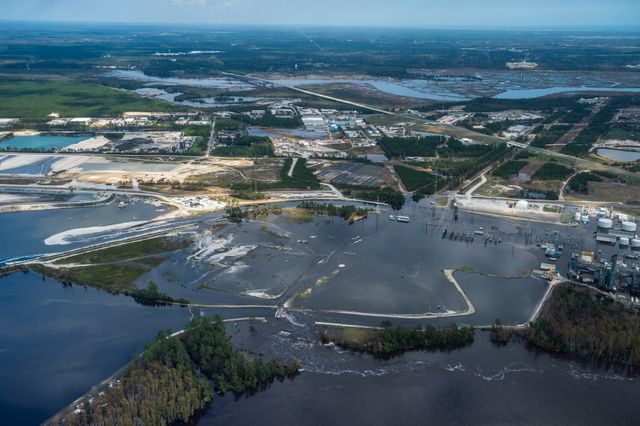 On Friday, Duke Energy said that flooding could be causing coal ash to spill from a pond near Wilmington into the Cape River. Lake Sutton, once a cooling pond for a coal-fired power plant and now a coal ash waste site, has overflowed more than once as a result of Hurricane Florence. Duke Energy has three coal ash pits at its H.F. Lee power plant near Goldsboro, all of which were inundated by the floodwaters of the Neuse River.

Coal ash contains dangerous heavy metals such as mercury, lead and cesium. Duke Energy agreed only to clean up its coal ash pits by 2029.

Meanwhile, officials say that 13 pits filled with pig waste have overflowed, with dozens more likely to follow. On Tuesday, the North Carolina Department of Environmental Quality said that another hog lagoon had breached about 60 miles north of Wilmington.

There are 3,300 such lagoons in North Carolina, which is the second largest hog-farming state in the country. The danger of them overtopping in a hurricane has long been known, but nothing has been done to avert a mass poisoning of water supplies. During Hurricane Floyd in 1999, tons of hog excrement leeched into rivers, wiping out fish.

Activists have been campaigning for years against the collection of hog waste. Last July, Smithfield Foods, the world’s largest pork producer, was ordered to pay $473.5 million to people living near three of its North Carolina farms after residents sued over the health effects resulting from the company’s massive concentrations of pig excrement.

In the days before Florence made landfall, the nonprofit group Waterkeeper Alliance surveyed the coastal area of New Bern, North Carolina, by airplane. The group found dozens of hog farms illegally spraying waste lagoon contents onto fields that were drenched in record flooding soon thereafter.

The multibillion-dollar livestock industry has lobbied the North Carolina legislature to eviscerate the state Department of Environmental Quality. The department’s budget has been cut by more than 40 percent since 2012. This policy has continued under Democratic Governor Roy Cooper. 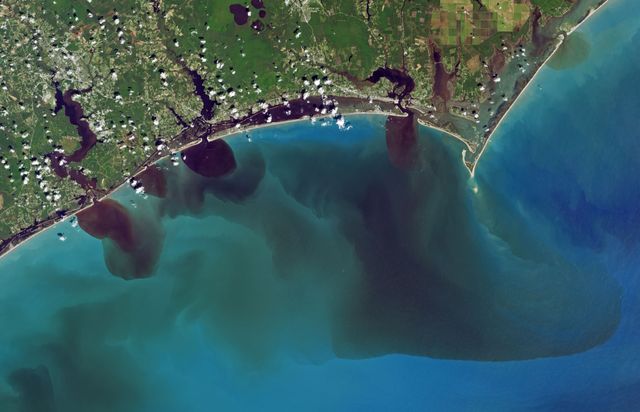 Images taken from a NASA satellite showed dark, polluted water flowing out of the New River, the White Oak River and Adams Creek south of Cape Lookout, North Carolina, into the Atlantic Ocean.

In another example of the role of corporate domination of the political system in the damage caused by Hurricane Florence, residents of badly flooded Lumberton, North Carolina, asked a federal judge on Tuesday to allow them to file a class action suit against the railroad giant CSX. They say CSX blocked attempts to build a floodgate system at a spot on its route through Lumberton that would have averted much of the flooding that has left the town largely underwater.

The complaint by the residents charges that “CSX’s conduct endangered the health and safety of a large region and population, caused and increased the risk of serious injury and bodily harm, and affected a financially vulnerable population.”