The most recent Living Planet Report reveals that the world’s populations of vertebrate—those species with a spine—have fallen by 60 percent between 1970 and 2014 as a result of human-induced global environmental changes. Put another way, the available data for all species and regions reveals that the number of mammals, birds, fish, reptiles and amphibians across the world has fallen by “well over half in less than 50 years.” At the same time, the report notes, this threatens the economic activity that ultimately depends on nature, “estimated to be worth around $125 trillion a year.”

Other data presented in the report indicate the same sobering trends. While Earth’s environment was relatively stable during the past 11,700 years, an era known as the Holocene, the past 50 years in particular have seen enormous changes to the planet’s ecosystem. “In the last 50 years, global average temperature has risen at 170 times the background rate,” the report says. “Ocean acidification may be occurring at a rate not seen in at least 300 million years. Earth is losing biodiversity at a rate seen only during mass extinctions.”

First published in 1998 and every two years since, the Living Planet Report and its primary statistic, the Living Planet Index, serve as a benchmark for biodiversity—the number of species in an ecosystem and the populations of those species—across the world. It is a collaborative effort between the World Wildlife Fund and the Zoological Society of London which analyzes the impact human activity is having on the environment and in turn how the various changes of Earth’s environment impact animal and human life.

Habitat degradation/loss, exploitation, invasive species and disease, pollution and climate change are the five factors that cause populations to decline. The impact each factor has depends on the type of animal. Credit: Living Planet Report 2018

The study tracks 16,704 populations representing 4,005 species of mammals, birds, fish, reptiles and amphibians currently used as the sample for Earth’s wildlife. All the populations in the study come from one of five major regions, which roughly correspond to North America, South America, Eurasia, Africa and Oceania. The divisions are based on the types of species found in the regions and provide a somewhat more granular understanding of the health of different regions around the globe, which in turn indicates whether the effects on a specific section of wildlife are local or global in scope.

The regions are then subdivided by taxonomic group—birds, mammals, fishes, reptiles and amphibians—and threats such as habitat degradation and loss, overexploitation, invasive species and disease, pollution, and climate change. This allows for an at-a-glance analysis of both what species in a given region are being most affected by the changing environment and what is driving their population loss.

On a global scale, the most common reasons for declining animal populations are habitat loss and overexploitation, which account for approximately three-quarters of global vertebrate population loss. This includes a combination of agricultural, residential, industrial and commercial development, logging, damming, and mining, as well as mass hunting, poaching and harvesting.

Climate change, in contrast, only accounts for less than 10 percent of the decrease in wild populations. The Living Planet Report notes, however, that this will increase as climate change accelerates and that “losses of wild species already suffering from more ‘traditional’ threats like habitat loss and overexploitation may be exacerbated by compromising a species’ ability to respond to changes in climate.” This interconnection is stressed throughout the report and is shown for climate change and every other impact humans have had on the environment.

The analysis showing the consequences of the deteriorating environment on human life are no less devastating. The cost that humans face, the report notes, is not just measured by the direct monetary loss caused by a lack of natural resources. There are natural processes that regulate air, water and soil, between 50,000 and 70,000 plants used industrially, as well as numerous cultural benefits that are being eroded as various ecosystems suffer collapse. 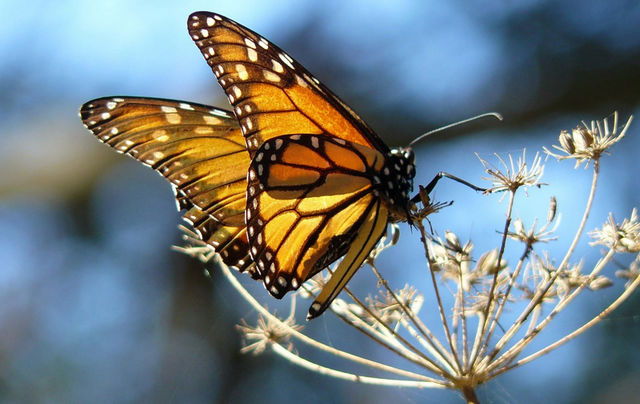 A monarch butterfly, one of many species of endangered pollinators. Credit: pxhere.com

One noted direct cost on humans is the loss of pollinators, which threatens at least $500 billion of crop production per year. Another, not discussed in the report, is the impact of extreme weather events such as wildfires, hurricanes and typhoons, made more common and stronger as a result of climate change, which kill thousands of people every year and cause hundreds of billions of dollars in damages globally.

Overall, a clear picture emerges of a planet in crisis. The biosphere of Earth, the “infrastructure” for all life on the planet, is collapsing. The massive expansion of human activity since the Industrial Revolution is the primary cause. What then are the solutions?

To its credit, the authors of the Living Planet Report never suggest a Malthusian approach, never suggest that perhaps the only road for a healthy planet is to eradicate some large percentage of the human race in order to restore some sort of equilibrium. On the contrary, the appeal to its readers is that the natural world should be preserved and strengthened in order for a “modern, prosperous human society to exist, and to continue to thrive.”

What they do not challenge is the socioeconomic form of political organization that helped propel the Industrial Revolution, capitalism and the division of the world into rival nation-states. In contrast to the global approach taken to the science they present, the authors appeal to the United Nations and its member states, all of whom have material interests in exploiting and ravaging the planet’s resources. This has been proven again and again by industrial/ecological disasters such as the BP oil spill and the radiation leakage from the Fukushima Daiichi nuclear plant.

As such, the crisis of the environment is ultimately a political crisis, one that can only be solved by a turn to the working class. Only through this social force, one which is inherently international and for which a healthy environment is a social necessity, can the restoration of Earth’s ecosystems even begin.