While the purpose of the mailer was to promote Democratic candidates in the election, the names of all Republican, third party and independent candidates besides Niles were included. 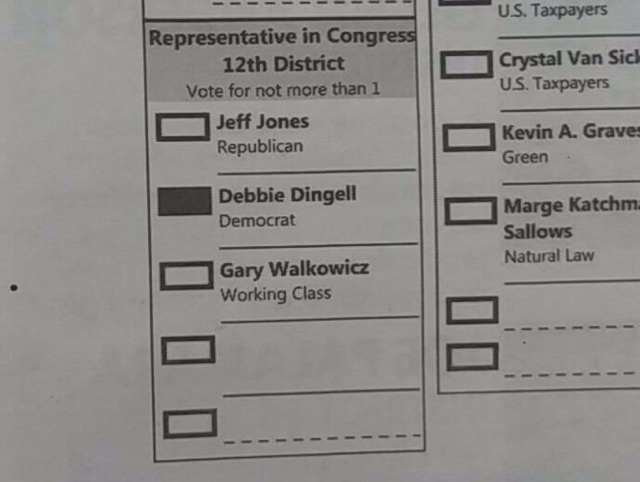 His name was apparently deliberately removed from the Wayne County mailer, since a nearly identical voter guide sent to residents of neighboring Washtenaw County, which includes the 12th district cities of Ann Arbor and Ypsilanti, includes Niles. For the Wayne County version, the place where Niles’ name would be is simply blank.

The Wayne County voter guide includes statements of endorsement from the United Auto Workers, while the Washtenaw Country guide has endorsements from Planned Parenthood Advocates of Michigan.

The apparently deliberate removal of the Socialist Equality Party’s campaign goes hand-in-hand with the censorship by WDIV News Channel 4 and ClickonDetroit.com, which had left Niles off of its voter guide. 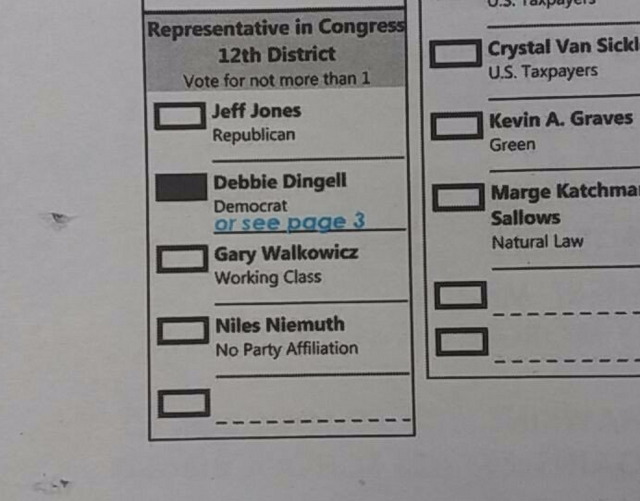 WDIV’s news director Kim Voet has yet to reply to an open letter emailed by Niles Thursday night, though the station has quietly added his name along with a link to Niles2018.com. Despite this half measure, WDIV has still not offered Niles coverage equivalent with his Democratic and Republican opponents, Debbie Dingell and Jeff Jones. Both were given the opportunity to record two-minute video statements in the news studio that were subsequently posted online.

With just one day before the midterm elections on Tuesday we encourage supporters of the SEP to write letters to Kim Voet at kimv@wdiv.com demanding WDIV provide Niles’ campaign with coverage equivalent to his opponents. Supporters can also send letters to Rep. Zemke protesting the omission in the voter guide’s sample ballot at adamzemke@house.mi.gov. Send copies of both to niles2018@socialistequality.com .

The WSWS is publishing another selection of the letters that were sent in response to Niles’ letter, protesting WDIV’s censorship of his campaign. Read more letters here.

I demand that you, as the director of WDIV News Channel 4 and ClickonDetroit.com, end your blackout on the 12th District election campaign of Niles Niemuth of the Socialist Equality Party.

Of the four candidates standing in Michigan’s 12th Congressional district, only the Democratic Party incumbent Debbie Dingell and Republican Jeff Jones were allowed to publish video statements on the news station’s website and appear on your official voter guide. This is an outrage to the democratic process. What are you afraid of?

This is an act of political censorship, aimed at reinforcing the political stranglehold of the two parties of big business. Its purpose is to block students and workers from having access to a genuine socialist program that opposes the capitalist system and the interests of the super-rich. WDIV is part of Graham Media Holdings, whose chairman, Donald Graham, has a reported personal wealth of over $500 million. Is this who you are beholden to? Not the truth? Not objective media coverage?

Niles Niemuth, a candidate on the ballot for Michigan’s 12th Congressional District, has informed me that you are barring Candidate Niemuth from posting a video statement on the website of WDIV News Channel 4. At the same time, such statements do appear at the News Channel 4 website from the Democrat incumbent Debbie Dingell and Republican candidate Jeff Jones.

May I ask you, what gives you the right to selectively decide which candidates can express their views on the website of Channel 4? The air waves are in the public domain, and the FCC requires that all stations that are granted the right to broadcast in the US are providing a public service. You by excluding Mr. Niemuth on the basis of your own personal views from providing a video statement are doing a disservice to the public.

Democracy thrives by debate. You by excluding the views of Mr. Niemuth are stifling debate and thereby making the US a less democratic country.

Additionally, Mr. Niemuth states that his name has been excluded from your official voter guide. If Mr. Niemuth has been placed on the ballot by the Michigan election officials, then what gives you the right to exclude individuals whose names will appear on the ballot from your “guide”? Do you have the right to tell voters who are the real candidates and who in your opinion are not?

I am writing to protest the media blackout by WDIV against the campaign of Niles Niemuth of the Socialist Equality Party. Young voters are fed up with the stranglehold of the two major parties, both beholden to the super rich and major corporate interests. We need a restructuring of the economic system to represent the needs of the public at large and of the planet.

Those who try to block this needed transformation will be on the wrong side of history.

Please know that it is important to let my candidate, Niles Niemuth with the Socialist Equality Party, be heard. Not allowing him to have a video statement on the WDIV website is shortsighted and not in the interest of the community and our society. It is, in fact, tantamount to censorship.

I am a great believer in and backer of the media and hope you will live up to the responsibility the media has to inform the public.