The ongoing wildfires in California, including the most deadly and destructive in the state’s history, are a horrific exposure of the collapse of social infrastructure and the consequences of government neglect.

The immense toll is just beginning to be comprehended. On Friday, the official death toll from the Camp Fire in Northern California reached 71, while the number of missing persons skyrocketed from 631 to 1,011.

The Woolsey Fire in Southern California began on November 8 and has destroyed over 98,300 acres, roughly the size of Denver, Colorado. Over 295,000 people have been forced to evacuate the region, and there have been three confirmed deaths as of this writing. The fire is now 69 percent contained. 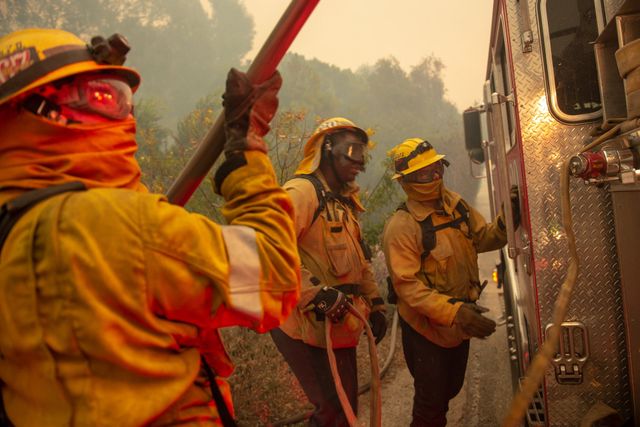 In Butte County, Northern California, the Camp Fire began on the same day and has caused far greater damage. The fire currently encompasses 146,000 acres, with 50 percent containment, and has forced 52,000 people to evacuate. The fire has destroyed 12,263 structures, including 9,844 single residences and 144 multiple residences.

Another 15,500 structures are still threatened by the Camp Fire, which is not expected to be fully contained until November 30 at the earliest. Statewide, roughly 9,400 firefighters have been deployed to fight the ongoing fires, of whom roughly 1,500 are prison inmates who are paid a meager $1 per hour.

The largely working-class, elderly towns of Paradise and Magalia, as well as multiple smaller census-designated places, have been essentially wiped off the map by the Camp Fire. Each day, an average of eight new bodies have been found in the rubble, as nearly 500 search-and-rescue personnel survey the area.

On Thursday, the number of missing people skyrocketed from 300 to 631, then to 1,011 on Friday evening. Butte County Sheriff Kory Honea has said that officials have finally processed all the 911 calls and missing person reports made over the past week. A map of the building damage in Paradise, CA and surrounding areas.

Officials have not released the names of all 1,011 missing people, but the most recent public list showed that the vast majority are elderly, with 91 percent over the age of 50, and therefore more likely to have perished given the rapidity of the wildfire’s spread and the complete lack of a citywide warning system.

The Camp Fire will likely rank among the top five deadliest wildfires in US history, and the deadliest since the Cloquet Fire in Minnesota killed an estimated 1,000 people in 1918. The fact that such a devastating event could take place in modern America speaks to the immense social crisis of contemporary capitalism, which subordinates all aspects of social life to the pursuit of private profit.

Beyond those killed or made homeless by the Camp Fire, millions more have been impacted across the Northern California region, as toxic particulate matter has fanned out and spread hundreds of miles westward, creating hazardous air for millions of residents in the densely populated Bay Area, as well as large parts of the Central Valley.

According to the air quality-monitoring network Purple Air, Northern California currently has the most polluted air in the world, worse than notoriously smoggy cities in India and China. On Friday afternoon, the air quality reached the highest “hazardous” rating on the Air Quality Index scale in the cities of Chico and Oroville, where most Camp Fire evacuees have fled, as well as the heavily populated Sacramento region, affecting over 600,000 people. At least 25 other cities in Northern California ranked in the highly toxic “Unhealthy” and “Very Unhealthy” range.

The cumulative, long-term health impact of this air pollution may never be fully known. The toxic air can cause asthma attacks and prompt strokes and heart attacks. Due to the fact that school funding is tied to attendance, almost every major school district in the region remained open throughout the week, until conditions became so bad that they were forced to close on Friday. Ambulances were sent to schools in the region Thursday to hospitalize students having severe asthma attacks. 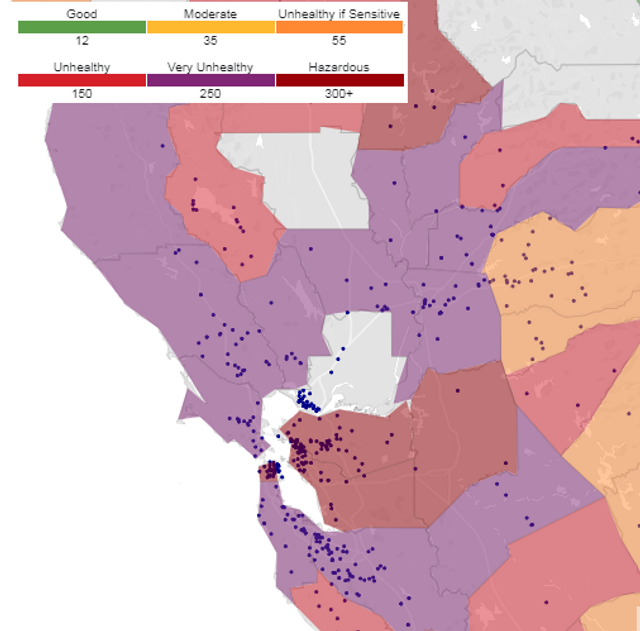 US President Donald Trump—who has feuded with the state’s Democratic politicians—initially threatened to cut off federal funding to the state. He has since backpedaled slightly, and the White House announced Thursday that Trump will visit “individuals impacted by the wildfires” this Saturday.

Whatever empty platitudes Trump issues during his visit, his administration will do nothing to make survivors whole or address any of the underlying causes of the epidemic of wildfires that have ravaged California in recent years. Nor will the Democratic politicians who run the state, including Governor Jerry Brown and Governor-elect Gavin Newsom.

Both parties are responsible for this catastrophe. Funding for the state agencies that oversee fire prevention and management has been continually cut in recent decades at both the state and federal level, while the energy monopoly Pacific Gas and Electric Company (PG&E) has been allowed to subordinate public safety to its private profit.

In a report published last June, Cal Fire found that PG&E equipment caused 16 wildfires last year, 11 of which involved violations of state fire prevention codes, making them potentially liable for $15 billion in damages. Southern California Edison, which provides energy for much of Southern California—including the region impacted by the Woolsey Fire—admitted in late October that its equipment helped spark the massive 2017 Thomas Fire that killed two people and burned over 280,000 acres.

However, in September Governor Brown signed into law SB 901, which limits the potential damages for which utilities are liable. The law also allows regulators to reduce assessed damages when weather exacerbates the disaster, and to take into account the company’s “financial status” to limit the costs to shareholders and allow the utilities to raise rates on the public.

PG&E shares have fallen by as much as 53 percent since the Camp Fire began, as the first ignition point for the fire is reported to have been under PG&E power lines near the Poe Dam. PG&E acknowledged Tuesday that it had submitted an “electric incident report” moments prior to the outbreak of the fire, sending its shares plummeting.

In response, late Thursday California Public Utilities Commission President Michael Picker held a private meeting with Wall Street investors and analysts, in which he reportedly said that he wishes to avoid a PG&E bankruptcy, and that he will allow the company to pass on wildfire-related costs to customers through a bond-purchasing program. After-hours trading caused PG&E stock to surge more than 44 percent, erasing the day’s 30 percent decline.

In an interview with the Chronicle, Picker stated, “If [PG&E] can’t borrow money, if they have liquidity problems and they can’t do vegetation management, that’s a problem. That’s not good policy, to really let them get financially unstable.”

Almost all of California’s electricity is transmitted through above-ground power lines on wooden poles, which are known to cause wildfires due to poor maintenance. Two rational but more expensive solutions are the use of underground lines or above-ground lines mounted on steel. Instead, PG&E has since 2013 begun cutting power to entire regions that experience conditions conducive to wildfires. In the days prior to the Camp Fire, PG&E sent warnings to customers in Butte County that they would temporarily cut power, indicating that they knew conditions were ripe for a wildfire. However, no cutoff was made before the fire broke out.

Both the Democrats and Republicans preside over a capitalist system that has proven incapable of addressing climate change, which is responsible for increasingly extreme and unpredictable global weather patterns. The 2011-2017 California drought was the driest period in state history since records began in 1895. Then 2017 brought one of the wettest years in state history, while 2018 has seen a return of drought conditions. The Camp Fire itself began after 210 continuous days without rain in the region.

The experience of the Camp Fire has affected millions of people and will deepen the ongoing radicalization of the working class. As Robert Starling, a restaurant dishwasher who fled the Camp Fire in Magalia, told the World Socialist Web Site, “This country has failed. We need to have an overhaul. I don’t know how it’s going to be done, if it’s going to take another revolution ... Things like this will make people mad and instill enough drive to do it.”

In a socialist society, the major corporations, including PG&E and Edison International, would be nationalized. Billions would be reallocated from the military and the bank accounts of the super-rich toward the rational planning of cities, including the universal use of underground or metal above-ground electrical infrastructure. Emergency response technology would provide instant notification of any wildfires or other extreme weather events, and fire departments would be fully funded to prevent any future outbreaks. Programs to halt and reverse human-induced climate change would create a stable climate and lay the basis for sustaining future generations of mankind.