Based on a true story, Green Book is a heartfelt movie set in the early 1960s, about a virtuoso African-American pianist and his white working class chauffeur, who embark on a concert tour in the deep South.

Directed by Peter Farrelly, the movie features Mahershala Ali as Dr. Don Shirley and Viggo Mortensen as Tony “Lip” Vallelonga. The screenplay was written by Vallelonga’s son Nick, in collaboration with Farrelly and Brian Hayes Currie. 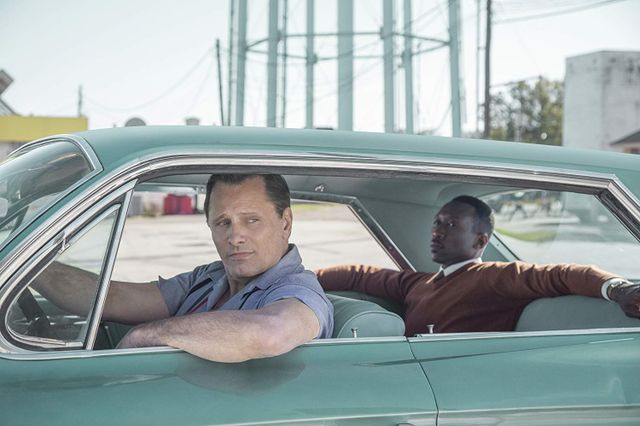 The film’s title comes from The Negro Motorist Green Book, published by New York City postman Victor Hugo Green from 1936 to 1966 as a guide for black travelers looking for safe havens in the Southern states that enforced Jim Crow segregation.

The movie opens in 1962 in New York City. Tony, a good-natured, semi-literate Bronx resident with a wife and two children, is on layoff from his job as a bouncer at the Copacabana night club. He interviews for a position as a driver and “muscle” with Don, an internationally renowned pianist, who lives in a sumptuous apartment above the prestigious Carnegie Hall.

Imperious and magnificent, Don has surrounded himself with gorgeous art and artifacts from around the world. The economic and cultural gap between the two is great, particularly given the fact that Tony has never before had to challenge his own racial prejudices.

Nonetheless, Tony is hired to make sure Don and his two musicians (the other members of the Don Shirley Trio) arrive safely at their contracted destinations throughout the South. Tony soon comes under the sway of Don’s personality and talents. At times, he has to forcefully defend the black pianist from both ruffians and more genteel racists, along with club-wielding cops.

In some of the poshest venues, Don is not allowed to use the bathroom or eat in the dining room. While Tony is provided reasonable sleeping arrangements, Don has to contend with fleabag motels, not permitted to venture into the streets, whether they are in “sundown” towns or not.

It soon comes to light that Don is also gay. At one point, the pianist cries out in anguish that he is “not black enough, not white enough, not man enough,” demanding to know, “What am I?” To drown out the pain and confusion, he consumes a bottle of Cutty Sark every night.

In the car, Tony listens to Little Richard, Aretha Franklin and Sam Cooke, popular black singers unfamiliar to Don. “These are your people!” shouts Tony in disbelief. He, of course, has never had any exposure to “high-brow” classical and jazz music. In Birmingham, Alabama—where singer Nat King Cole had been attacked on stage in 1956—Don is barred from eating with the same guests who he will later be entertaining. Repulsed, Don and Tony flee the stodgy ballroom, ending up in a lively black club, where Don’s performance—a spectacular combination of classical and jazz—brings down the house.

During their journey, Tony—and Don—are shocked by the sight of oppressed black sharecroppers working in the fields.

Meanwhile, the pianist helps Tony, in Cyrano-style, formulate letters to his wife Dolores (Linda Cardellini). When Tony signs the letters, Don good-humoredly quips that it’s “like putting a cowbell at the end of Shostakovich.” As the relationship between employer and employee matures, a tender friendship is cemented.

Green Book is a decent, intelligent film, graced by the performances of its outstanding leads. It appears that Farrelly, the creator of juvenile comedies like Dumb and Dumber, The Three Stooges and Dumb and Dumber To, has become more thoughtful.

More should be said about the remarkable Don Shirley (1927-2013) a classical and jazz pianist and composer. Born in Florida to parents of Jamaican descent, Don, a prodigy, started to learn piano at the age of two. At nine, he was invited to study at the Leningrad Conservatory of Music.

In the course of his career, he performed with the Boston Pops, the London Philharmonic and the Detroit Symphony, also working with the Chicago Symphony and the National Symphony Orchestra. He wrote symphonies for the New York Philharmonic and the Philadelphia Orchestra. At Milan’s La Scala, only he, Arthur Rubinstein and Sviatoslav Richter have performed as soloists. 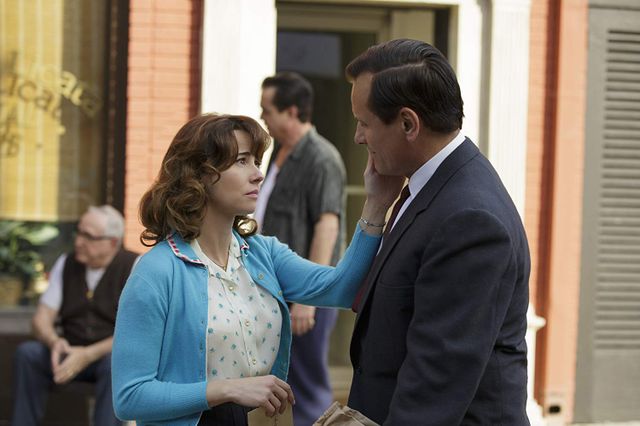 For its humanistic, anti-racialist message—the elementary notion that white and black people can get along—Green Book has been well received by audiences. Predictably, for the same reason, it has also aroused hostility from those who live and breathe identity politics. Typical headlines originating from that crowd read: “Green Book Is a Poorly Titled White Savior Film,” “Green Book is Another Unneeded White People’s Guide to Racism” and “Is Green Book ‘Woke’ Enough?”

Richard Brody in the New Yorker opines: “The essential subject of Green Book isn’t the honoring of cultures, identities, and differences but their effacement in the interest of an ostensibly color-blind neutrality, a bland common ground of an accepted mainstream (in pop and high culture alike) of cuisine, entertainment, friends, family, and personal gratification…

“This grotesquely ahistorical and impersonal view honors a mode of racial enlightenment—a ‘both-sides’ enlightenment—that’s as regressive as it is universally salable.”

A. O. Scott in the New York Times writes: “Every suspicion you might entertain—that this will be a sentimental tale of prejudices overcome and common humanity affirmed; that its politics will be as gently middle-of-the-road as its humor; that it will invite a measure of self-congratulation about how far we, as a nation, have come—will be confirmed.”

This is reactionary nonsense. Green Book has its limitations, but it’s a fascinating, consequential episode. It’s shameful that these upper middle class critics cannot see beyond their racialist noses.

American artist and filmmaker Julian Schnabel’s At Eternity’s Gate is the latest treatment of the painter’s life. It focuses on van Gogh’s last years, from 1887 to 1890. Schnabel has created thoughtful works, such as Before Night Falls (2000), about Cuban poet Reinaldo Arenas, and Miral (2010), the story of a Palestinian girl coming of age in Israel during the First Intifada.

At Eternity’s Gate is co-written by Schnabel, Louise Kugelberg and Jean-Claude Carrière. Eighty-seven-year-old Carrière is known for his 19-year collaboration on the films of Spanish filmmaker Luis Buñuel.

According to Schnabel: “This movie is an accumulation of scenes based on painter Vincent van Gogh's letters, common agreement about events in his life that parade as facts, hearsay, and scenes that are just plain invented. The making of art gives an opportunity to make a palpable body that expresses a reason to live, if such a thing exists.” 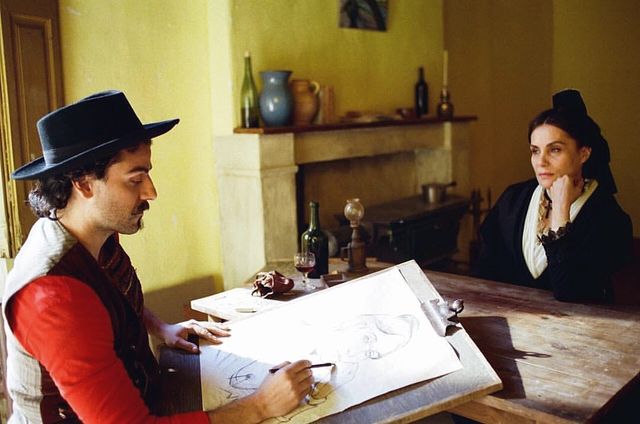 Oscar Isaac and Emmanuelle Seigner in At Eternity’s Gate

The movie opens in Paris, where a frustrated, unsuccessful Vincent (Willem Dafoe) meets the rebellious painter Paul Gauguin (Oscar Isaac), who convinces him to follow the sunlight to the south of France. Funded by his loving brother Theo (Rupert Friend), Vincent sets up in Arles. One day, he puts his tattered boots on the red tile floor of his yellow room and paints them—a masterpiece that now hangs in New York’s Metropolitan Museum of Art.

Vincent is soon joined by Paul. (The latter: “We have to start a revolution between painting and reality”). In one memorable scene, they paint side by side, each creating a wildly different version of the same model. Chiding Vincent, Paul says: “Your surface looks like it’s made out of clay. It’s more like sculpture than painting.” When Paul leaves, a despairing Vincent cuts off part of his ear.

The artist tends to be either wandering child-like through nature with an easel, brushes and paint strapped to his back, or immobilized in a straitjacket during his stays in psychiatric hospitals. Eventually, in the final months of his life, he is discharged into the care of Dr. Paul Gachet (Mathieu Amalric) in Auvers-sur-Oise.

At Eternity’s Gate is suffused with breathtaking beauty and stands as an original look at the internal life of the painter. Cinematographer Benoît Delhomme creates the feeling that Vincent is rooted in the earth and rustles with the vibrant bushes and tall grasses in Arles’ expansive fields. A panoramic shot of a wintry landscape dotted with dead, black sunflowers is affecting.

The intense Dafoe is convincing despite the age difference between the actor and the painter. Furthermore, the relationship between Vincent and Theo, who never loses confidence in his brother, is movingly and sensitively dramatized. Essentially, Schnabel seeks to bring out van Gogh’s psychic state, unconcerned with external trappings such as language, a somewhat awkward mélange of French and English. 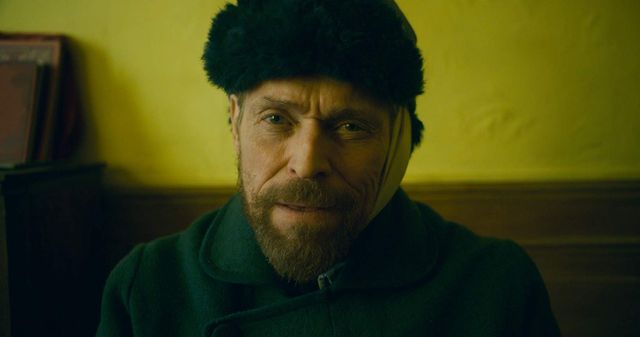 Willem Dafoe in At Eternity’s Gate

In one significant segment, Vincent meanders through Paris’ Louvre Museum, contemplating the works of Delacroix, Veronese, Goya, Velasquez and Franz Hals. “They are speaking to van Gogh as he speaks to painters today,” says Schnabel. “There is something there about how artists communicate beyond the grave.”

The movie, however, does not go as far as it might. Biographers and filmmakers alike once assumed that social environment and historical circumstances helped shape the artist, so they explored those elements. Not so today.

Schnabel seems to suggest that the title of his film, At Eternity’s Gate, has an other-worldly meaning. “When facing a landscape I see nothing but eternity,” says Vincent in a voiceover. “Am I the only one to see it?”

In fact, something far more down to earth is involved. At Eternity’s Gate is an oil painting done by Van Gogh shortly before his death in 1890. It is based on his 1882 lithograph Worn Out, inspired in turn, at least in part, by the image of an old, worn-out working class man, depicted by the Belgian socialist artist Paul Renouard in San Travail (Without Work). The painting is not, as the filmmakers imply, merely a foreboding of the subject’s mortality, but a representation of his unemployed condition and physical exhaustion.

Schnabel adopts a rather abstract, ahistorical view of van Gogh, a man of exceptional culture and compassion. However, in his letters, the 19th century painter articulately set out his own social and cultural views.

“I see paintings or drawings in the poorest cottages,” van Gogh wrote, “in the dirtiest corners. And my mind is driven towards these things with an irresistible momentum.” He railed against art profiteers. The “art trade” has become “all too much a sort of bankers’ speculation and it still is—I do not say entirely—I simply say much too much ….I contend that many rich people who buy the expensive paintings for one reason or another don’t do it for the artistic value that they see in them.”

The painter was committed to confronting reality. He argued repeatedly along these lines, included in a letter to Theo: “The most touching things the great masters have painted still originate in life and reality itself.” Van Gogh’s subjects included coal miners, peasants, weavers and manual laborers.

The intensity of his short life—during which he sold only one work out of the 850 he painted—and his tragic death have combined to strike a sympathetic chord with millions of people over the years. He painted landscapes and portraits with urgency and an unparalleled emotionality. If he saw things differently, it was not because the structure of his eye was different to that of previous painters, but because the structure of society was different. Ultimately, he was a child of the great social struggles and transformations of the 19th century. Ignoring these issues makes for a less interesting, compelling film.