Two days after US troops pointed assault rifles at Central American workers on the US-Mexico border and border police fired tear gas and rubber bullets at defenseless women and children, Senator Bernie Sanders told CNN he did not believe all of the migrants had a “credible” claim to asylum.

The statement, a clear olive branch to the anti-immigrant pogrom being conducted by President Trump, was by no means an off-the-cuff remark. It came in what was obviously a carefully prepared interview, which began with the CNN moderator, John Berman, raising the events on Sunday at the San Ysidro border crossing between San Diego, California and Tijuana, Mexico. 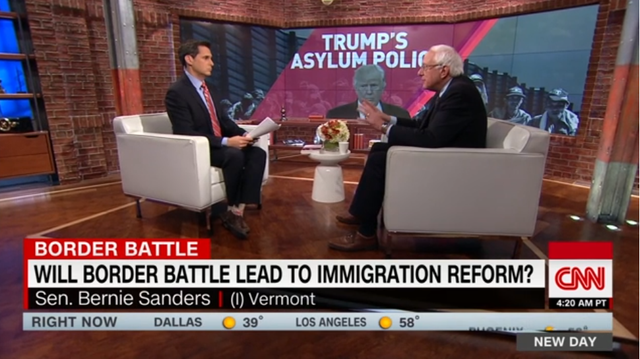 Berman asked: “As we look at what’s happening right now over the border in Tijuana, 5,000 to 9,000 migrants there waiting in a stadium seeking asylum, do you think that they all have a credible claim for asylum?”

Sanders did not hesitate. “No, I don’t,” he said, adding, “and I think you have to look at it case by case.”

Without criticizing Trump or the military and border police, let alone demanding the withdrawal of soldiers, tanks and helicopters from the border, Sanders immediately pivoted to the need for “comprehensive immigration reform.” This is a euphemism for a punitive plan that would impose fines and other penalties on undocumented workers currently in the US while allowing some to eventually gain citizenship, combined with a further militarization of the border.

It boils down to allowing some immigrants to be legally exploited at poverty wages in the US while condemning millions of other workers in Central America and Mexico to hellish conditions of violence, repression and poverty imposed by more than a century of American imperialist oppression.

Sanders did not offer any explanation for presuming that there were workers within the Caravan who were not eligible for asylum—an internationally protected right.

Berman then pressed the Vermont senator on right-wing proposals to deny asylum seekers entry to the US to file their claims, requiring them instead to apply from and remain in Mexico—an outright repudiation of asylum law. Sanders dodged the question, declaring, “I am 100 percent supportive of comprehensive immigration reform.”

He then changed the subject to climate change, which has been adopted by the Democratic Party leadership as a “safe” issue unlikely to interfere with its post-election appeals for bipartisan collaboration with Trump and the Republicans.

There is nothing accidental about Sanders’ semi-endorsement of Trump’s anti-immigrant policy. In the course of a seven-minute interview on Sunday’s “Face the Nation” program, he made no reference to Trump’s attacks on immigrants and the democratic rights to asylum and due process. When asked by CBS on Monday, he refused to condemn the use of tear gas, calling merely for the government to “minimalize the level of force being used” in the future. He then rushed to change the subject, saying “there are other issues as well” besides immigration.

The promotion of American chauvinism and anti-immigrant economic nationalism are not novelties for Sanders. He has consistently lined up with the trade union bureaucracy and trade war factions of the ruling class to pit American workers against their class brothers and sisters in Mexico, China and other countries.

Shortly after he announced his bid for the Democratic presidential nomination, in July of 2015, Sanders spelled out his basic anti-immigrant position, blaming foreign workers for the destruction of jobs and wages of American workers caused by capitalism. Interviewed on the Vox website, he cut off the moderator when he suggested a policy of open borders, declaring:

“Open borders? No, that’s a Koch brothers proposal… That’s a right-wing proposal, which says essentially there is no United States… It would make everybody in America poorer.”

Sanders continued: “You’re doing away with the concept of a nation state, and I don’t think there’s any country in the world that believes in that… What right-wing people in this country would love is an open border policy. Bring in all kinds of people, work for $2 or $3 an hour. That would be great for them… You think we should open the borders and bring in a lot of low-wage workers, or do you think maybe we should try to get jobs for those [American] kids?”

Sanders’ economic nationalism is bound up with his defense of capitalist private ownership of the means of production, notwithstanding his socialist pretensions, and his support for US imperialism. He fully backed the wars launched or continued by Barack Obama in Afghanistan, Libya, Iraq and Syria, and, despite his recent pose of opposition to the war in Yemen, does not call for an end to US financial, military and political support for Saudi Arabia, Washington’s partner in the near-genocidal conflict.

In a “Meet the Press” interview in October 2015, Sanders was asked if he would utilize drone assassinations and Special Forces if he were elected. His infamous answer was, “All of that, and more.”