On January 21, 1994, Roger Cawthra, a Greyhound bus driver framed up for shooting at a scab driver during the 1990 Greyhound strike, entered an Alford plea (essentially no-contest) in Superior Court in Hartford, Connecticut. Cawthra agreed to accept a sentence of one year in prison for five counts of reckless endangerment. He told the International Workers Bulletin at the time that it was “one of the most difficult decisions I have had to make.”

Cawthra had been convicted on felony charges in May 1991 for the incident, but an appellate court was forced to overturn the ruling in December 1992, admitting an unfair trial. The state authorities refused to drop the case and initiated a new trial. The prosecution’s original case was based entirely on the testimony of Carl Francis Harris, a scab and professional strikebreaker.

“I took into consideration the feelings of my family. They depend on me for financial support,” Cawthra said after the plea deal. “If I went to trial and was subsequently found guilty, I would no doubt be sentenced to six and a half years imprisonment. The time I have already been away has stressed them beyond endurance. I didn’t want to put them through any more. If it were not for my family, I would have defied the state of Connecticut to take me back to trial and endeavor to convict me a second time.”

The Workers League (predecessor of the Socialist Equality Party) took up the defense of Cawthra, understanding its political significance at the time. The Amalgamated Transit Union (ATU) and its Local 1202 leadership abandoned his fight and according to Cawthra “refused to lift a finger in support of my situation.” The Workers League insisted that the ATU was complicit in the case and campaigned for Cawthra’s defense in the working class.

Cawthra’s frame-up was part of a decade of government-backed union busting, beginning with the smashing of the 1981 PATCO air traffic controllers strike.

50 years ago: State of emergency declared in Spain 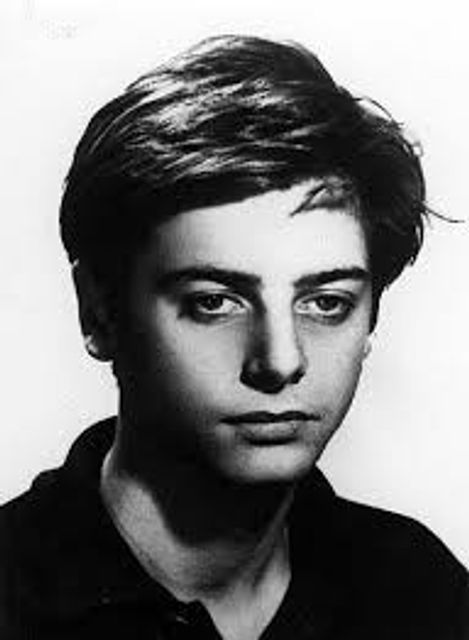 On January 24, 1969, Francisco Franco, Spain’s fascist dictator since 1939, declared a state of emergency that suspended civil rights in the country. The decree gave the police the authority to search homes and individuals without a warrant, make arrests and hold prisoners indefinitely without charge, exile residents from their home provinces, suppress free speech, and prevent public assembly.

The declaration of the state of emergency also saw a return to the policy of newspaper censorship. In 1966 a degree of freedom for Spanish publications was permitted. But now after the January 24 decree all published material had to be submitted to and approved by the government ministry.

Franco issued the three-month order after student and youth demonstrators clashed with police. Led mostly by Communist and Marxist youth organizations, students at the universities of Barcelona and Madrid carried out strikes calling for educational reforms, more civil liberties, the formation of democratic student organizations, and denouncing Franco’s regime.

The event that sparked the protests was the death of law student Enrique Ruano Casanova, a member of the Popular Liberation Front. Police had taken Casanova into custody for “suspicion of Communist activity.” He was then killed after falling to his death from a seventh-floor window. The police claimed that Casanova committed suicide. In the following months the state carried out a cover-up and smear campaign that went as far to release a diary containing suicidal thoughts that supposedly belonged to Casanova. After Franco’s death it was finally admitted that this document was a fabrication.

Spanish students, however, immediately rejected this explanation and spilled out into the streets chanting, “He has been murdered!” and “Police assassins!” In Barcelona, students stormed the office of the hated university director and threatened to toss him from his office window in retaliation.

The police responded to all the student demonstrations with great violence. Initially, students fought back and attempted to defend themselves. However, they were eventually overwhelmed and beat with clubs until the demonstrations dispersed. 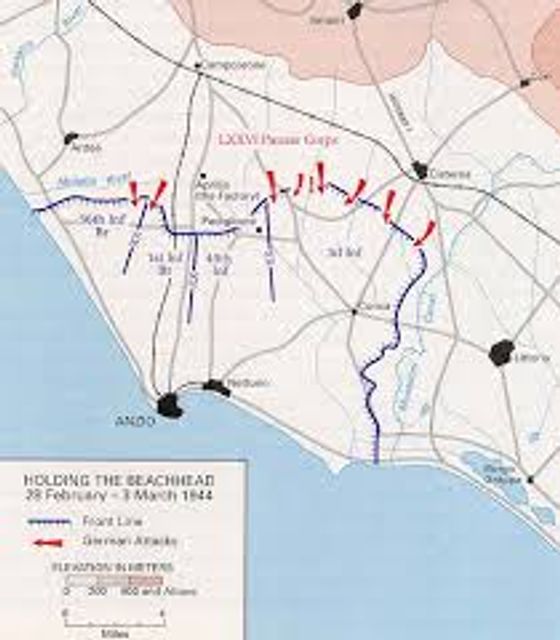 On January 22, 1944, Allied forces under the command of British General John Lucas began amphibious landings near the city of Anzio in Italy. The operation, code-named Shingle, aimed to break the stalemate which developed by the end of 1943 on the Italian front.

German armed forces under the command of Field Marshal Albert Kesselring had conducted a determined defensive campaign utilizing the rocky terrain of the narrow peninsula. They had managed to stall Allied forces along a series of defensive lines that they constructed near Rome. The crux of German defenses, the Gustav Line, ran east from the Garigliano River to the mouth of the Sangro River at the Adriatic.

The Allies decided to leverage their overwhelming sea power and land an army behind the German lines. They were to capture Alban Hills and threaten the Gustav Line’s rear to compel a German retreat. The invading force were able to establish a beachhead and began to advance inland, disembarking 36,000 men and 3,200 vehicles on the first day. Meeting little resistance, the Allies suffered only 13 deaths and 97 wounded. Lucas, however, did not press for a continued offensive. Instead, he focused on consolidating the Allied beachhead and bringing ashore the rest of the Allied invasion force.

All tactical surprise was lost and Kesselring was able to rapidly mobilize German forces to the beachhead. By the next day there were more than 40,000 German soldiers surrounding Anzio and within a week the number would swell to 71,000. Kesselring pressed for an immediate offensive to drive the Allies back into the sea, but Lucas struck first. Under pressure from other allied commanders to advance, he launched an offensive on January 30. With his forces now numbering 69,000 men he attacked in two directions, attempting to capture Campoleone and Cisterna. The attack failed to penetrate the now well-defended German positions and the Allies suffered heavy losses.

In the weeks that followed, both the Allies and Germans would wage a series of offensives and counteroffensives at each other’s positions. By March, a stalemate had set in with the Germans too weak to crush the Allied beachhead and the Allies unable to crack the German defenses. 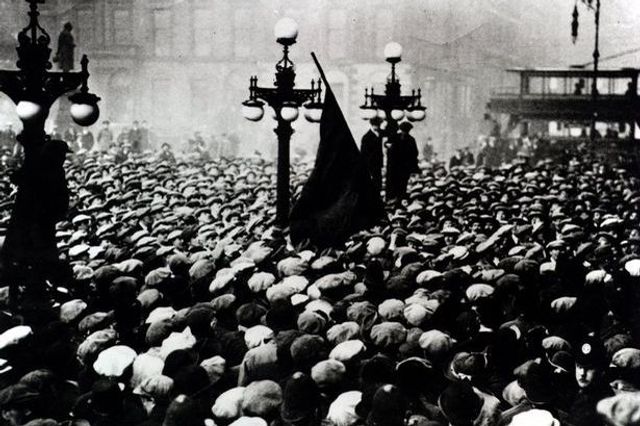 On January 27, 1919, 40,000 workers in Glasgow struck, demanding a reduction in the workweek from 47 hours to 40 hours. The strike began with a rally of 3,000 workers, primarily from the shipbuilding and engineering industries, in St. Andrew’s Hall.

The strike was organized by Scottish Trades Union Congress and the Clyde Workers Committee (CWC), which had emerged in opposition to the official trade union leadership during wartime strikes. Many of its leaders were socialists, who played a prominent role in the founding the British Communist movement in the following years. A Joint Committee of the CWC and the unions was set up to direct the strike.

Because war-time industries were being dismantled and thousands of demobilized servicemen were returning to the area, workers were concerned that they would face mass unemployment. The goal of the strike was to reduce the workweek to provide work for the enlarged labor force.

Flying pickets quickly spread the strike to other sections of the working class throughout the city and the following day 70,000 workers were off the job, as power workers and miners struck in sympathy. A major challenge of the strike was to keep the trams from running, and strikers fought battles with police who were unable to keep the mass transit in service.

The strike reached its peak when a mass rally of tens of thousands of workers on Friday, January 31 assembled in George Square to hear the official response of the government to a petition by workers to reduce the workweek. In an unprovoked attack, police charged the strikers. The “Bloody Friday” battle between police and workers spread throughout the streets near the square and lasted into the night.

When CWC leaders Willie Gallacher and David Kirkwood, in negotiations with the government, heard news of the police attack, they proceeded to George Square and were themselves assaulted by the police and arrested. Gallacher and Kirkwood, still under arrest, were asked by the authorities to appeal for calm and they did so, urging protesters to march out of George Square.

In the following days, Glasgow was occupied by thousands of troops brought in the other parts of Scotland and from England because the authorities were concerned that troops stationed in the area, who had all been in the front lines of the war, might side with the strikers. Machine gun nests were set up in George Square and tanks were stationed in the Glasgow Cattle Market.

The strike ended without the workers achieving their goals. The police arrested dozens of socialist and union leaders in its aftermath, and many were sentenced to prison terms of several months. But the experience of the strike had a profound radicalizing effect on the Scottish working class that lasted for generations. In the 1922 elections, the Independent Labor Party candidates won 10 of the 15 Glasgow parliamentary constituencies.