DSA and pseudo-left provide cover for the UAW, Democrats

Anger in the auto plants is seething over the plans by General Motors to close five factories in the US and Canada with the elimination of some 15,000 white collar and production jobs. The recent sitdown protest at the Oshawa, Ontario factory, a facility slated for closure, is just one manifestation of the determination of workers to fight. 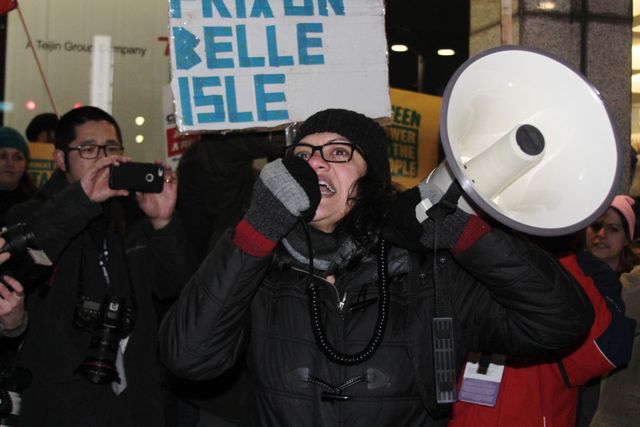 The demonstration Friday, however, did not seek to mobilize and unite the working class, but was instead a calculated diversion aimed at promoting illusions in the Democratic Party and the pro-company United Auto Workers (UAW) union. It was directed not at uniting the working class against the closures, but at making appeals to the bitter enemies of the working class.

Indeed, it was timed to coincide with the auto show’s Charity Gala, admission cost $400 per person. Its main audience were well-heeled members of Detroit’s elite decked out in evening gowns and tuxedos.

The demonstration itself mobilized about 200 DSA supporters, UAW and Unifor union officials and members of pseudo-left tendencies, but very few autoworkers. This was despite the fact that the local news media gave the event considerable promotion.

The lack of participation of autoworkers was entirely understandable, given that the DSA uncritically supports the UAW, even leading chants of “UAW! UAW!” and promoting this corrupt, corporatist body, which has long operated as a tool of corporate management. 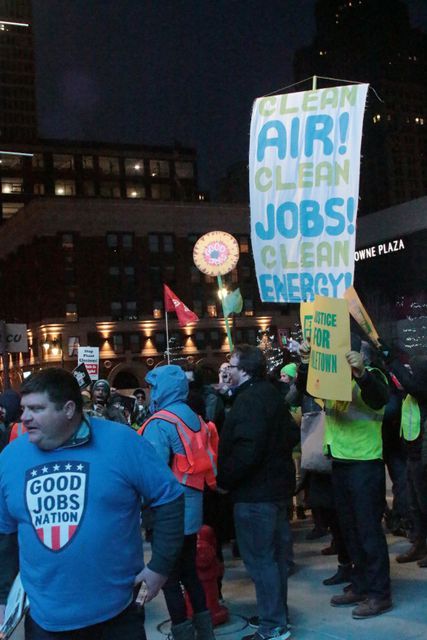 Some of the protesters

For its own tactical reasons related to a division of labor within the Democratic Party, the UAW did not directly endorse the auto show protest. In tandem with the rally, the UAW held a meeting with Michigan Democratic Governor Gretchen Whitmer at its Detroit headquarters followed by a pathetic candlelight vigil, involving no more than 50 participants, at Hart Plaza, just down the street from the auto show venue at Cobo Hall.

The fact that the UAW could mobilize no more than a few dozen participants for its vigil out of an organization with tens of thousands of dues-paying members in the Detroit area, including workers at the threatened Detroit-Hamtramck assembly plant, is a damning demonstration of its bankruptcy and isolation. It further demonstrates that the UAW is widely despised by workers and is entirely dependent for its continued existence on the patronage of the auto corporations and the government.

The auto show rally was called on an explicitly nationalist and pro-capitalist basis, echoing the “Buy American” campaign of the UAW. Placards denounced GM for shipping jobs to China and Unifor members wore jackets targeting Mexican workers. Needless to say there was no call for unity with 70,000 “maquiladora” workers on strike in Matamoros, Mexico or yellow vest protestors in France.

The political focus of the rally was the call for a “Green New Deal,” a slogan being advanced by Tlaib and Congresswoman Alexandria Ocasio-Cortez in alliance with a section of Democrats. The “Green New Deal” is a political fraud, embracing a number of vague, left-sounding proposals completely subordinate to the acceptance of capitalism and the nation-state system. Among Ocasio-Cortez’s stated goals are the promotion of “entrepreneurship” and “labor market flexibility,” code words for the destruction of jobs, wages and working conditions. 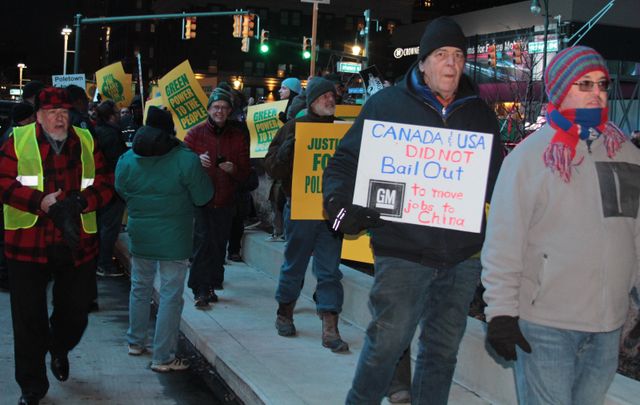 A nationalist poster at the rally

Significantly Tlaib, in her brief remarks at the rally, made no mention of the GM plant closings, let alone issuing a call to oppose them. Making clear her orientation to the ruling elite, she declared, “It’s our job that every single person sipping on champagne in there will know ... that we deserve better!”

Indeed, the logic of a Green New Deal would be measures similar to what the hated Macron government is carrying out in France: regressive tax increases and attacks on living standards in the name of protecting the environment.

A serious effort to address the myriad of social ills facing mankind, including environmental degradation and rampant social inequality, cannot be carried out without a frontal assault on capitalist private property. It requires the collective and united action of the global working class in a struggle to expropriate the transnational conglomerates and the fraternal unity and cooperation of the world’s people in dismantling the reactionary nation-state system created by capitalism.

Autoworkers can only defend their jobs and living standards if they mobilize their strength in opposition to both corporate-controlled parties and the corporate interests they defend.

That is the animating spirit of the demonstration called by the Steering Committee of the Coalition of Rank-and-File Factory Committees for February 9 outside of GM headquarters in Detroit. The demonstration, which is being organized in conjunction with the World Socialist Web Site Autoworker Newsletter, is based on a call to workers in the United States, Canada and Mexico to unify and unite with workers globally against the onslaught against jobs and in defense of elementary rights.

The recent sitdown action by Oshawa workers in Canada and the ongoing strike by “maquiladora” workers in Mexico show the way forward for autoworkers. Nothing will be achieved through protests to the unions, the auto companies or the Democratic Party. The only way to defend workers’ interests is through their own independent action.

The pseudo-left groups in the orbit of the DSA promote an opposite perspective. One of the initiators of the auto show protest was the Labor Notes publication in tandem with Autoworker Caravan, comprised of a group of active and former UAW officials who pose as “left” critics of the UAW. These organizations are hostile to any attempt to mobilize workers independently of the union apparatus, insisting that the UAW is the sole legitimate voice of workers. Their perspective is based entirely on promoting illusions that the UAW and the Democratic Party can be pressured into defending the interests of workers.

They market their services to the UAW bureaucracy in hopes of gaining cushy posts by integrating themselves into the union apparatus.

In particular they like to point to the wartime conversion of the auto industry to build tanks and planes during World War II as a positive example that they would like to see emulated in the Green New Deal. At that time President Franklin D. Roosevelt secured the cooperation of the UAW and other unions in enforcing a no-strike pledge in exchange for appointing labor officials such as UAW President Walter Reuther to tripartite corporate, government, union bodies, such as the War Production Board.

One of the proposals advanced by Labor Notes and other pseudo-left groups at the demonstration was the call for Detroit Democratic Mayor Mike Duggan, a shill for billionaires Dan Gilbert and the Ilitch family, to seize the GM Detroit-Hamtramck factory that is slated for closure using eminent domain and convert it to “green union” jobs. 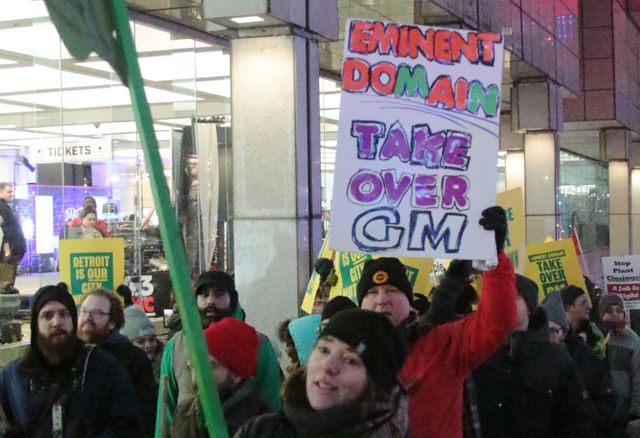 The outcome of such a proposal, in the unlikely event it were realized, would be the creation of a free enterprise zone based on handing out massive tax breaks to investors and exploiting a cheap-labor work force compelled to pay dues to the UAW.

Workers should recall that in 2009 Labor Notes, Autoworker Caravan and other similar outfits promoted the illusion that the Obama administration could be pressured into protecting workers’ interests by converting GM into a “public trust” to invest in electric cars and other “green energy” technologies. Instead the Obama administration carried out a brutal restructuring of the auto industry on the backs of workers, slashing tens of thousands of jobs, slashing pay for new hires and savage attacks on retirees.

The appeal to Duggan is based on the explicit acceptance of the closure of the Detroit-Hamtramck plant and demoralizing and demobilizing opposition by workers. Above all it seeks to maintain the straitjacket of the UAW over the workers and block any independent mobilization or initiative.

The claim that American capitalism can offer workers a New Deal, similar to that advanced by Franklin Roosevelt in the 1930s, is a fraud. For decades, US capitalism has been in an intractable decline, symbolized by deindustrialization on the one hand and the rise of financial speculation and explosive social inequality. Far from carrying out any social reforms, the American ruling class has waged a decades-long war to strip workers of all their past achievements, while seeking to offset the loss of economic hegemony through endless wars. Those like Sanders, Ocasio-Cortez and the DSA who are promoting the lie that the Democratic Party can be turned into a “progressive” party are setting a trap or workers and lining them up for the next world war.

We urge autoworkers and all workers to support and build the February 9 demonstration called by the Steering Committee of the Coalition of Rank-and-File Committees. Its aim is not to pressure organizations that are hostile to the interests of the working class but to mobilize our own independent power.

The demonstration will call for “No plant shutdowns, no layoffs, no concessions” and “Unite workers in the US, Canada and Mexico!” We call on all workers to stand together and fight as one against the corporate onslaught being carried out with the help of the UAW and big-business politicians.