The strike of tens of thousands of Matamoros maquiladora workers is set to grow on Friday as the legal “cooling off” deadline for a citywide strike expires, meaning many more plants will likely walk out.

As workers are eager to expand the strike wave, all of the forces supporting the capitalist class are scrambling to shut the strike down. Workers are now faced with a choice: either they maintain their momentum and build their power through their emerging factory committees or they forfeit the initiative over to the government and the unions.

Yesterday, Mexican President Andrés Manuel López Obrador (AMLO) heeded the demands of the unions and corporations and addressed the strike in his morning press conference, making clear he was counting on the unions to intervene to shut the strike down:

“We are looking for conciliation and agreement above all in Matamoros,” he said. “There is inconformity, and they haven’t reached an agreement. It seems the workers have rebelled against their union leaders, and the matter has grown out of control. Although it is not a matter of our direct attention to put ourselves into the life of the unions, we must be respectful if we are looking for a fix and conciliation.”

AMLO’s comments show that the unions, the Movement for National Regeneration (Morena) government and the corporations are engaged in the same conspiracy as before the strike when they robbed workers of wage hikes and bonuses.

All calls for bringing the situation under “control” and finding “conciliation” mean forfeiting the 20 percent wage increase and payment of the promised bonus. It means forcing workers to give in to the demands of the companies. The threats of federal intervention heighten the possibility that the government will use violence to break the strike.

Meanwhile, workers gathered in the central plaza for a mass assembly yesterday, with some carrying signs that read “AMLO they say you betrayed us.” Workers are correct to oppose AMLO’s appeals for conciliation and must convince their coworkers that AMLO is not their ally. After all, it was AMLO who just cut the tax rate for maquiladoras from 30 to 20 percent and allowed them to slash benefits as a result of the fraudulent minimum wage bill.

While AMLO appeals for “conciliation,” the corporations and the unions engage in threats and acts of physical violence. A striker was brutally beaten by unidentified thugs on Monday, and workers report mass firings in response to the strike. 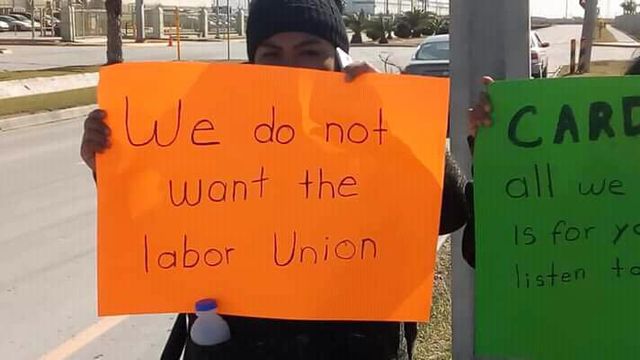 Personalities close to the union and Morena are posturing as “friends” of the workers while urging them to appeal to the government and the trade unions for support. This is a recipe for disaster.

Labor lawyer and Morena activist Susana Prieto, who campaigned for pro-maquiladora Morena candidate Javier González Mocken in the Ciudad Juárez mayoral election in 2018, has urged workers to trust the AMLO government. Mocken met with Maquiladora owners in June 2018 and said he wanted to “make deals with the corporations,” adding, “I ask you to join me in constituting part of the municipal government if the election result is in our favor.”

At yesterday’s public assembly, she told workers, “I don’t think the federal government is in disagreement with what we’re doing.”

Prieto speaks out of both sides of her mouth. While verbally claiming to oppose the trade union leaders as sell-outs, Prieto said she and union leader Juan Villafuerte “have a congenial relationship” and that he “just called me to say the negotiation was continuing.” She added, “We have converted ourselves into caretakers of the actions of Mr. Villafuerte so that he does what the working class wants.” Last week, Prieto said, “Fellow workers, you have to pressure, to begin with, the union. You cannot free yourselves from Villafuerte for now.”

Prieto also denounced news articles workers are reading on social media. This was a clear attack on the World Socialist Web Site, the only international publication which has written about the strike.

Demanding that workers follow her Facebook page and ignore all other accounts, she said, “Don’t follow whatever garbage you read on social media.” She denounced workers for having “opinionitis”—i.e., for forming their own political views. She previously demanded there be “no politics” in the strike. 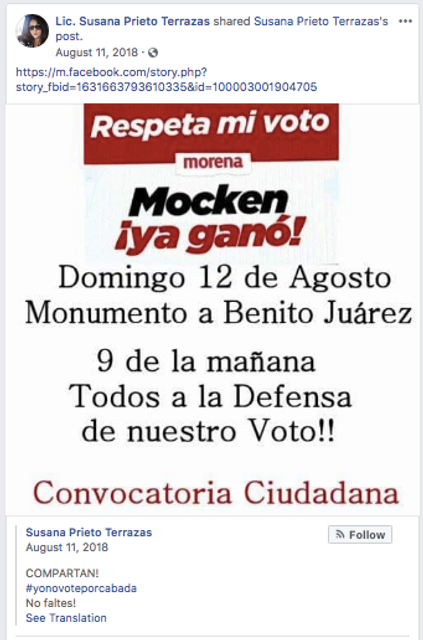 An anonymous Matamoros worker told the WSWS, “I think [Prieto] does not want to really help. Everything is a mafia here in Mexico. Nowadays it is hard to really trust anyone that has to do with politics.” The worker said she follows the WSWS coverage: “It is great! Good job. Thanks for putting out the truth.”

At a demonstration Tuesday, Prieto invited a local figure, Mario Ramos, to launch a 15-minute diatribe against socialism and its influence in the strike.

“Nothing they say on social media is true,” he said. “This movement is not communist nor socialist. It doesn’t appear to me that you can have a peaceful movement if you are socialists or communists.” He asked, “Do you want to be like Venezuela?”

Ramos said, “I’m a capitalist, I like money,” to which Prieto nodded and said, “me too.” Ramos continued, saying, “I’m going to tell you how to organize” and suggested workers take down their red and black strike flags in exchange for the religious image of the Virgin of Guadalupe. He demanded workers “call the attention of President López Obrador.” 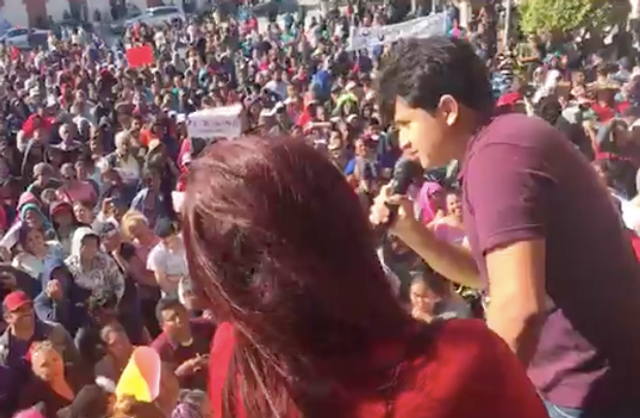 The striking workers grew hostile and began to laugh and shout Ramos down. He continued to lecture workers on the benefits of capitalism and the evils of socialism, at which point workers’ angry shouts drowned him out. When he asked the crowd if he could speak later, the workers yelled “No!” and burst into applause when he finally stopped talking.

This emerging revolutionary fighting spirit among the workers is the source of strength that workers must tap into to win their strike.

Workers have broken from the pro-company trade unions and are electing their own leaders from each factory to form a citywide strike committee. They are also reportedly establishing self-defense committees to protect strikers from violence.

Instead of listening to the half-truths and double-speak of “Prieto the capitalist,” workers must fight to ensure the independence of their committees and must not trust those who tell them to let AMLO and the unions “control” the situation.

Matamoran workers must control the strike. They presently occupy a position of strength. Their powerful independent initiative has both shuttered sweatshop production and provoked a crisis within the US, Canadian and Mexican ruling classes.

The most powerful North American auto companies are hurt by the strike. A Ford worker told the World Socialist Web Site: “I work at Flat Rock Assembly and can confirm we are laid off this week due to a parts shortage, from the looks of it, it may extend longer.”

Tens of thousands of workers in the US and Canada are eagerly reading the coverage of the strike on the World Socialist Web Site and are sending more messages of support to their Matamorense allies:

Robert, a Fiat Chrysler worker at the Jeep plant in Toledo, Ohio, said, “I fully support our brothers from down south who are striking to gain fair wages and bonuses. It’s a human right worth fighting for to have a living wage and to be able to raise a family without working yourself to death. To enjoy life and your family is worth workers of all countries taking a stand and fighting for living wages that make sure every worker who is putting in a week of work doesn’t have to live in poverty."

Robert also called on all workers to support a demonstration to be held on February 9 by autoworkers in Detroit against plans by GM to shut plants. The demonstration will call for all workers to support the Mexican strike and build links across national boundaries for a common struggle: “I call on every member of the auto industry to stand and let GM know that their greed will not stand in this world one minute longer.”

Tommie, a skilled trades worker at Ford’s Woodhaven Stamping Plant, just outside of Detroit, said, “It’s great to know that workers south of the border are fighting the same class struggle as North American workers. The only way we can defend the working class is for all workers around the world not to bend to union complicity and corporate profits. We must stand with the Mexican walkouts.”

Tommie added, “All workers should attend the February 9 demonstration to fight the GM plant closings.”

Angela, a Fiat Chrysler worker from Kokomo, Indiana and a member of the Steering Committee of the Coalition of Rank-and-File Committees, said, “All workers around the world need one another. What we have in common is everything. I stand with you in solidarity because we need each other and because together we are unstoppable.”

In a global economy, the international unity of the working class is a strategic necessity. Workers who wish to form a common international strategy should contact us by email at autoworkers@wsws.org or via our Facebook page in order to take up these crucial steps. For more information on the February 9 rally in Detroit, visit wsws.org/aut.