Thousands of plantation workers in Sri Lanka’s Central Hills district held strikes and protests yesterday in opposition to a sellout wage deal signed by the trade unions and the plantation companies, with the backing of the national government.

Plantation employees, who are one of the poorest sections of the Sri Lankan working class, have conducted a protracted struggle for a 100 percent daily wage increase. The union-brokered agreement mandates pay rises of just 40 percent. 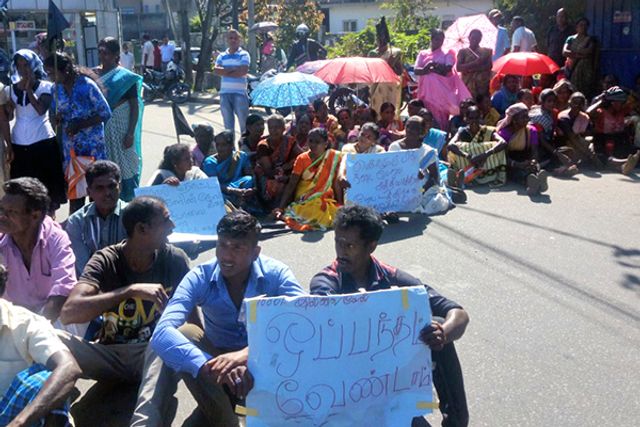 Around 1,000 angry workers from the Montifiore division of Abbotsleigh estate and from the Strathdon, Weli-Oya and Osborn estates walked-out in protest. They gathered in Hatton, the largest town in the Central Hills district, and blocked the Colombo-Hatton highway for several hours.

The workers chanted slogans condemning the deal and denouncing union leaders. Workers from the Puliyawatta and Annfield estates near Hatton also went on strike. Employees at estates near Bogawantalwa held protests on Sunday and Monday. Hundreds of workers marched several kilometers to Haputale, a town in Badulla district, to show their opposition.

P. Suntharalingam, the president of the Abbotsleigh Estate Workers Action Committee, participated in yesterday’s Hatton rally. He told the WSWS: “Workers must learn the lessons of this betrayal by the trade unions. Not only Thondaman and Vadivel Suresh, but also P. Digambaram, R. Radhakrishnan and Mano Ganeshan [leaders of the National Union of Workers (NUW), the Upcountry People’s Front (UPF) and the Democratic People’s Front (DPF)] are responsible for this sellout.

“This agreement was signed at the prime minister’s office. This shows that the government organised this deal. Digambaram, Radhakrishnan and Mano Ganeshan are ministers in the government. All of the unions are supporting the companies and capitalist rule. Workers must break from the trade unions and form action committees in every estate to fight for our rights.”

The Abbotsleigh action committee was organised by workers after interventions by the Socialist Equality Party (SEP) during last month’s plantation workers’ strike. On Sunday, it passed a resolution calling for a rejection of the union agreement and the establishment of action committees at every estate.

In discussions on Friday, three unions, the CWC, the LJEWU and the Joint Plantation Trade Union Centre (JPTUC) agreed to wage proposals made by the EFC, with the support of Wickremesinghe’s government.

JPTUC leader Ramanathan praised the deal on Friday as the “best possible.” On Monday, in a bid to deflect anger among workers, he did not sign the agreement and made bogus criticisms of the fact that it abolishes attendance and productivity allowances.

Under the agreement, the basic wage will be increased by 200 rupees to 700 rupees per day ($US3.86). A price share supplement allowance is being raised from 30 to 50 rupees. All together, a worker can only earn a gross wage of 750 rupees a day. 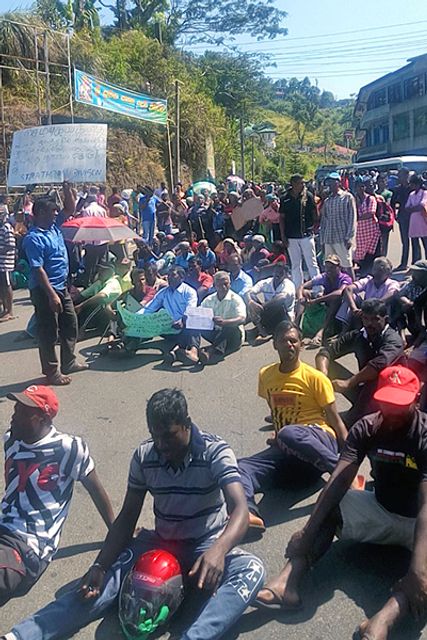 Workers protesting on the Hatton-Colombo highway

Previously, workers who attended their plantation 24 days a month received a 140 rupee attendance allowance and were paid a 60 rupee productivity incentive. The unions have agreed to the scrapping of these two payments.

Bonuses for extra kilograms plucked above targets set by estate management will rise from 25 to 40 rupees. This means that to earn more than 750 rupees, workers will be compelled to do even more back-breaking work than they already do.

The government has also promised a cash bonanza to the companies, composed of an outright grant of 100 million rupees and a 50 million interest-free loan, supposedly so that they can pay arrears owed to workers since October.

The unions, the government and the media have refused to make public all of the clauses contained in the agreement.

Throughout last year’s dispute, the companies insisted that they were facing loses which jeopardised their ability to compete on the world market. The Planters’ Association has repeatedly demanded that the existing wage system be replaced by a revenue share scheme.

Under this system, workers are each allocated a plot of land with around 1,000 tea bushes. The workers only receive income from the plot after company profits and expenses have been deducted.

This is aimed at transforming workers into sharecroppers without a guaranteed wage or any rights. In several estates where the scheme was trialled, workers came to oppose it because they could not earn enough money to survive, even when their entire family was toiling on their plot.

There is a real danger that the companies and the unions have included clauses in the new agreement enabling the introduction of the revenue share scheme. Even if it does not, the unions have cleared the way for further attacks.

All of the unions are responsible for this betrayal. The NUW, the DPF and the UPF, while not direct parties to the agreement, have remained silent on it, signalling their support. They all played a key role in suppressing industrial and political action by plantation workers, in collaboration with the government and the major companies.

Workers engaged in determined protests and strikes throughout the last three months of last year. In December, around 100,000 plantation workers launched an indefinite strike.

President Maithripala Sirisena, fearful that the struggle would become the focal point of a movement of the working class against his government, made a bogus promise to solve the wage dispute. The unions, including the CWC, responded by calling off the strike and entering backroom discussions to organise a betrayal. 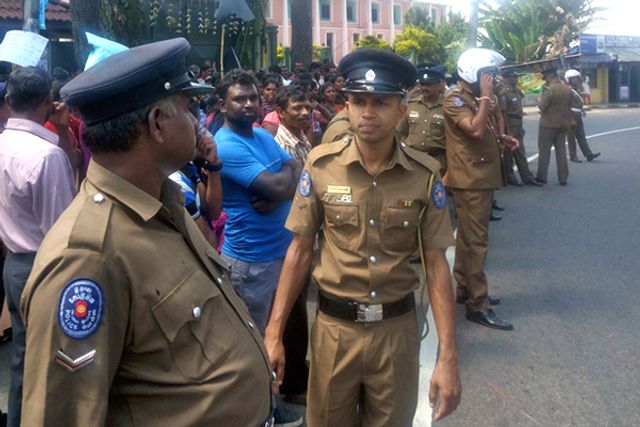 The plantation workers’ struggle is a part of an upsurge of the international working class, including in South Asia.

Earlier this month, up to 180 million Indian workers took part in a two-day strike. Around 700,000 teachers and government employees are engaged in an indefinite stoppage in the state of Tamil Nadu. In Bangladesh, thousands of garment workers have held determined protests in the face of police violence.

These struggles around the world are increasingly emerging as a rebellion against the unions.

The pseudo-left organisations in Sri Lanka, and internationally, are responding by promoting the fraud that workers can advance their interests through the corporatised unions and by placing pressure on governments and companies.

The pseudo-left Frontline Socialist Party and the New Democratic Marx-Lenin Party (NDMLP) have joined with several trade unions, including the Free Trade Zones and General Services Employees Union and the Ceylon Plantation Services Union to form a “1000 Movement.”

Yesterday they held a protest in front of an EFC office reiterating the demand for a 1,000 rupee wage. A leaflet issued by the group called on workers to “Pressure the government, the plantations authorities and the trade unions” to increase the daily wage. This is a cynical ploy to subordinate workers to the very organisations that are imposing a sellout deal against them.

As the SEP alone has explained, what is required is a rebellion against the unions, and the establishment of action committees at every estate. These will be tasked with organising an industrial and political campaign by all plantation workers against the sellout agreement, and for their full demands for a 100 percent wage increase and improved conditions to be met.

This poses the need for a break with all of the capitalist parties, the unions and their pseudo-left adjuncts. It raises the necessity for an alternative political perspective, based on the fight for a workers’ and peasants’ government that would implement socialist policies, including placing the plantations under public ownership and democratic workers’ control.