How the ruling elite sought to suppress revolution

Renewal: Life after the First World War in Photographs

Renewal: Life after the First World War in Photographs

Until March 31, 2019 at the Imperial War Museum London

The Imperial War Museum’s Renewal: Life after the First World War displays 130 black and white photographs taken in the aftermath of the bloody inferno that cost the lives of more than 10 million soldiers and 6 million civilians. Some 23 million soldiers were wounded and half a million homes in 1,600 towns and villages in Europe destroyed. 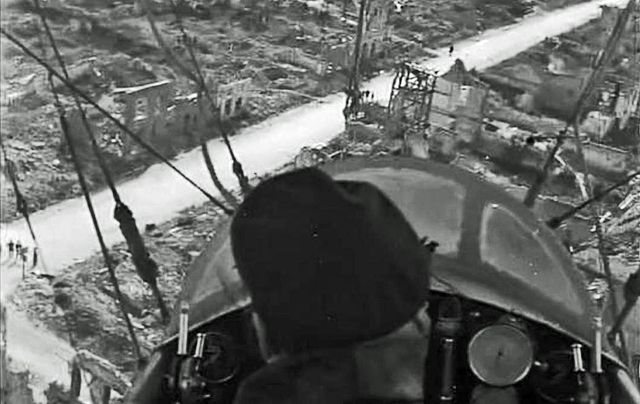 Some sense of the ghastly devastation is shown in Lucien Le Saint’s 1919 film of the Western Front, “En dirigeable sur les champs de bataille” (“In an airship on the battlefield”) commissioned by the French government to back up its demands for German reparations. The sight of the airship flying over miles of ruined buildings as tiny figures wander slowly below remains spellbinding. A version of the film can be found here.

The exhibition states, “After four years of death and destruction, on a scale never known before, people had to rebuild their lives, communities and countries.”

“However, tensions and violence were still present in many parts of the world.”

The exhibition charts the initial optimism that followed the end of the war. Civilians and soldiers are shown celebrating in Birmingham on the day of the Armistice on November 11, 1918 and demobilised soldiers returning home. But there were few jobs or homes for them. The exhibition acknowledges, “Fearing that this might spark communist revolution, the British government acted quickly. They pledged to build thousands of ‘homes fit for heroes’ and introduced a generous unemployment benefit scheme.” 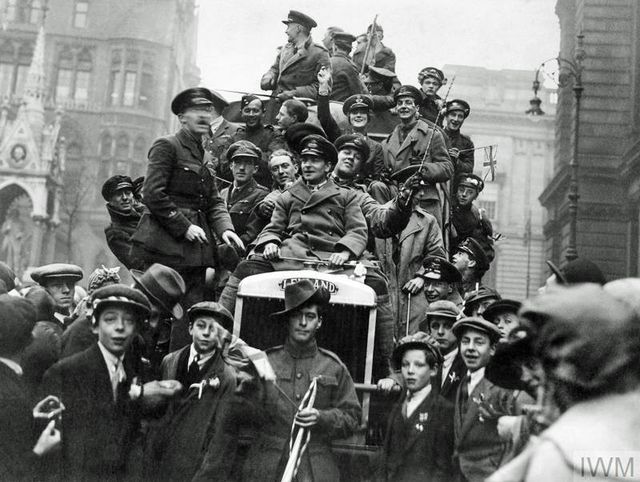 War pensions were given, but the Disabled Soldiers Handbook of 1918 shows that each injury was minutely costed and compensation reflected the British class system—officers receiving substantially more for their injuries than their men.

The government introduced new building standards, but many houses were later found to be poorly constructed and had to be condemned. Britain’s largest housing estate was built at Becontree in east London, but “although the standard of their accommodation was much improved, the early residents found a lack of community facilities. … Local employment opportunities were also limited.” 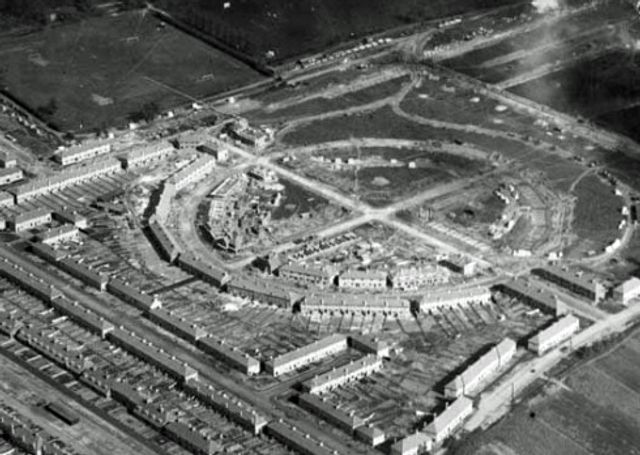 These trifling concessions to the working class do little to back up the exhibition’s claims of “renewal” and a “better world.” As one progresses around the exhibition it becomes clear that the main concern of British imperialism in the post-war period was to overturn the real “renewal” represented by the 1917 Bolshevik Revolution and the “better world” beginning in Russia (none of which, incidentally, is shown in the exhibition).

Secretary of state for war, Winston Churchill, was determined “to strangle at birth the Bolshevik State” and prevent revolution spreading to Britain and its Empire. Probably one-third of the photographs on display deal with those attempts.

The exhibition notes, “Peace did not come to Europe with the defeat of Germany in 1918. Radical political ideas and the desire to form new nations led to civil wars, wars of independence and revolutions from Ireland to Iraq. Central to this was the prolonged struggle between communist and anticommunist forces, sparked by the Russian Revolution of 1917.”

A large display board in the museum makes clear that the British government never forgave the Bolsheviks for signing the Treaty of Brest-Litovsk with Germany in 1917, which formally ended the war on the Eastern Front. “Russia has failed us when we most needed her help and her armies have ignominiously retreated,” it proclaims. 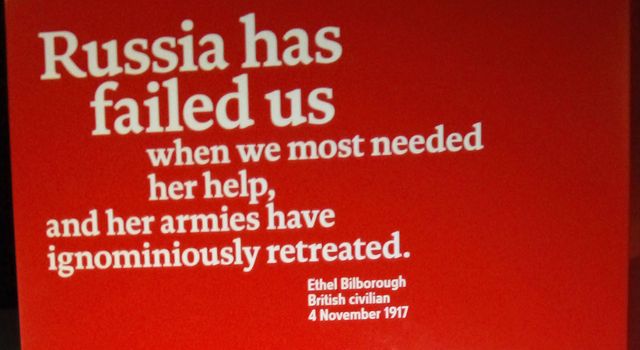 Several photographs deal with the “Allied Intervention in Russia,” mounted by the US, Britain and several British Empire and European countries after the October Revolution to bolster the counterrevolutionary White armies. The campaign lasted from 1918 to 1920, when the Red Army commanded by Leon Trotsky was victorious.

You would not guess that from the photographs. Members of the Canadian Siberian Expeditionary Force pose defiantly and soldiers of the Czechoslovak Legion march in a Victory Parade in London in July 1919.

All we are told about the Legion is that it comprised Czech nationalists who first fought with the Austro-Hungarian Army, went over to the Allies and then “fought communists in Russia and in border disputes with Poland and Hungary in 1919.” But the Legion acted as a brutal counterrevolutionary spearhead for the imperialist powers. The new Soviet government offered the Legion safe passage through Siberia to Vladivostok to board ships returning home. However, in collusion with British and French imperialism the officers refused to disarm and staged a revolt instead. They occupied the rail route into Siberia, cutting off food supply to the areas under Soviet control, which were already experiencing widespread famine. In June 1918, the first anti-Soviet government was established on Russian territory under the protection of the Czech Legion in Samara. 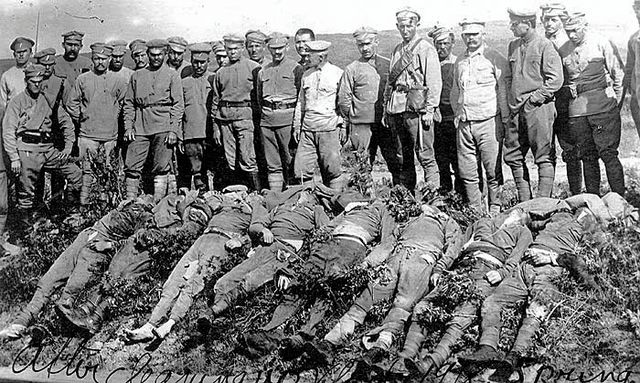 The threat of rebellion in the British colonies is also evident. A poster for Burmese soldiers listing benefits available after demobilisation reveals how “British rulers in India hoped such assistance for ex-soldiers would be enough to keep the men loyal without the need for serious political reforms.”

In the West Indies, soldiers “quickly became disillusioned as promises of jobs and land were not honoured. Civil unrest followed, threatening British rule.” 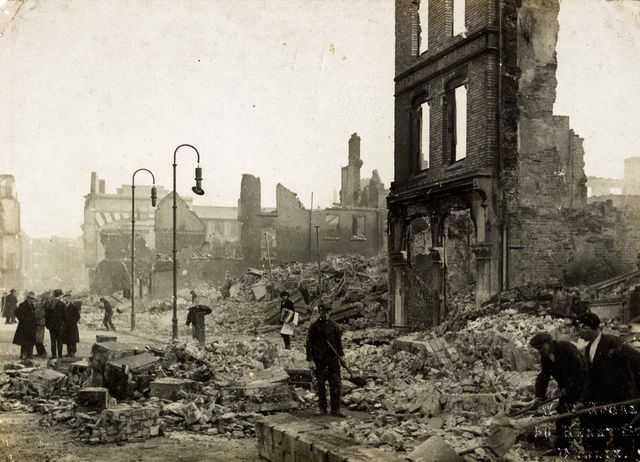 In Ireland, the British government responded swiftly and brutally to Sinn Fein declaring an Irish Parliament and the outbreak of the War of Independence (1919-1921). It partitioned the northeast of the country and sent over the “Black and Tans” troops who, along with the “Auxiliaries,” an army body of ex-officers, conducted a terrifying campaign of repression. Over 300 buildings were destroyed in Cork on December 14, 1920 in reprisal for an Irish Republican Army ambush.

Using repression, bribes and lies British Prime Minister Lloyd George gained agreement to the 1921 Anglo-Irish Treaty, which enforced the partition of Ireland and forced the Irish Provisional Government to swear allegiance to the British crown. The resulting split in the nationalist forces of Sinn Fein drove Ireland into civil war. 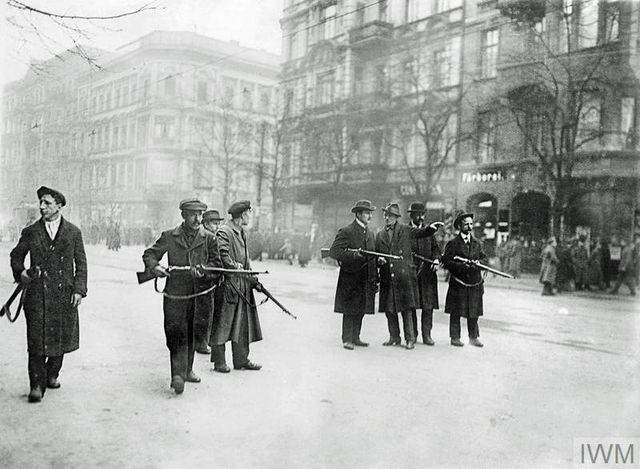 The exhibition has several photographs of the German Revolution (1918-1919) when the working class, inspired by the Russian Revolution, rose up against the war and monarchy. They show barricades and street fighting by members of the Spartacus League formed by former Social Democratic Party (SPD) leaders Karl Liebknecht and Rosa Luxemburg. Two weeks after founding the Communist Party of Germany (KPD) in January 1919 Liebknecht and Luxemburg were murdered by the soldiers of the Freikorps, the precursor of the Nazi stormtroopers, who had been mobilised by SPD Defence Minister Gustav Noske. 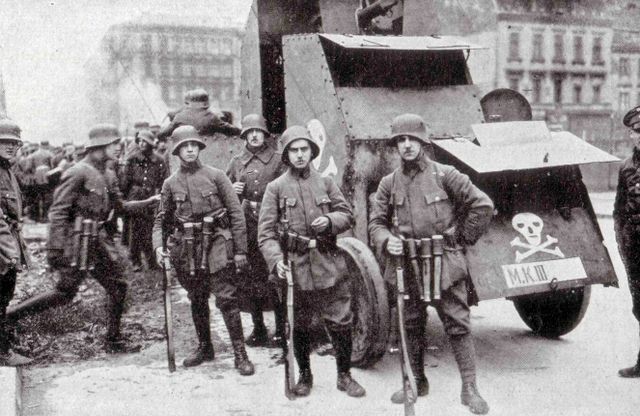 The defeat of the November Revolution had devastating consequences, isolating the Soviet Union and facilitating the growth of the Stalinist bureaucracy. 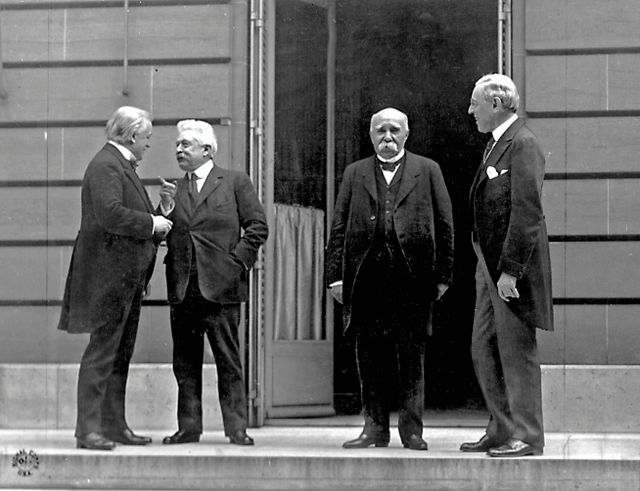 The exhibition concludes that “only in 1923 did peace truly come to Europe.” But as the Bolsheviks had warned, the ruling elite did not bring peace and democracy. The enormous dislocation caused by the war, aggravated by the undemocratic 1919 Versailles Peace Treaty, was a key factor in the further development of economic breakdown that was to lead to the emergence of Mussolini’s fascist movement in Italy and the Nazi movement in Germany. Stalinist influence on the policies of the Communist International led to further defeats of the international working class. In 1933, the catastrophic policies of the KPD, which opposed a united front against the Nazis, resulted in Hitler taking power without a shot being fired—paving the way to the eruption of war once more in 1939.