In a revolting spectacle of hypocrisy and reaction, the Democratic leadership in the House of Representatives pushed through a resolution on Thursday condemning remarks by Minnesota Democratic Rep. Ilhan Omar critical of Israel and the Israel lobby in the US, branding her statements as “anti-Semitic.”

The resolution was the product of a fractious debate within the House Democratic caucus between hard-line Zionists and so-called “progressives” who objected to singling out Omar, one of two female Muslim Democrats elected to the House in last year’s midterm elections. The other is Rashida Tlaib of Detroit.

The resolution was overwhelmingly passed in a bipartisan vote of 407 to 23, with all House Democrats, including Omar and Democratic Socialists of America members Tlaib and Alexandria Ocasio-Cortez, voting in favor.

With this vote, the Democratic Party has capitulated to and joined with the Republicans and right-wing forces internationally in prosecuting a witch-hunt against a fabricated growth of “left-wing anti-Semitism.” Media commentators prosecuting the attack on Omar specifically and repeatedly associated her supposed anti-Semitism with the influx of younger Democrats running as “progressives” into the Democratic House caucus and the supposed anti-Semitism of the British Labour Party and its leader, Jeremy Corbyn. 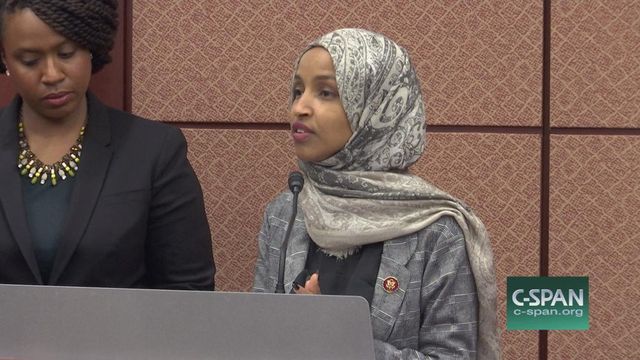 Similar libelous attacks are being carried out by the right-wing Macron government in France against the Yellow Vest protest movement and by the grand coalition government against those opposing Israeli repression of the Palestinians in Germany.

Meanwhile, the European governments are fostering the growth of neo-fascist parties and groups such as the Alternative for Germany (AfD) and the National Front in France, and bringing neo-fascists and anti-Semites into government, from Italy to Hungary, Austria and Poland. In Israel itself, the far-right Netanyahu government has formed an electoral alliance with the fascist and anti-Arab terrorist Jewish Power party.

President Donald Trump is whipping up anti-immigrant racism and working with fascistic outfits and individuals such as Breitbart News and Stephen Bannon in an attempt to create a fascist movement in the US. He tweeted on Wednesday:

“It is shameful that the Democrats won’t take a stronger stand against anti-Semitism in their conference. Anti-Semitism has fueled atrocities throughout history and it is inconceivable they will not act to condemn it!”

Trump and other Republican leaders are demanding that Democratic Speaker of the House Nancy Pelosi strip Omar of her seat on the House Foreign Affairs Committee. This is the same president who used the White House in 2017 as a forum to praise as “very fine people” neo-Nazis who held a torchlight parade in Charlottesville, North Carolina and chanted, “The Jews will not replace us!”

Omar is a Somali-American whose family fled from their home country, which was and continues to be devastated by US military intervention and subversion, when she was a child. She has spoken out against Israel’s murderous repression of the Palestinians and came under attack by the Republicans and the Democratic leadership last month when she criticized the outsized influence, including financial, on Congress wielded by the Israel lobby and its most powerful organization, the American Israel Public Affairs Committee (AIPAC).

At that time, House Speaker Pelosi and five other top House Democrats immediately issued a joint statement accusing Omar, by name, of anti-Semitism and demanding an apology. Omar apologized, but this retreat only set the stage for a new and more aggressive attack.

Last week, speaking at a Washington DC book store, Omar complained of demands that she be thrown off of the Foreign Affairs Committee, saying she should not be compelled to declare “allegiance to a foreign country.” This was seized on by Rep. Eliot Engel, a hard-line Zionist who chairs the House Foreign Affairs Committee, who called her remarks an “anti-Semitic trope” echoing slanders of Jews as disloyal aliens. Engel demanded Omar apologize once again and began drawing up a condemnatory resolution.

The resulting resolution, which did not mention Omar by name but which clearly identified her as a purveyor of the anti-Semitic “dual loyalty” trope, linked her remarks to such crimes and atrocities as the persecution of Alfred Dreyfus in France, the lynching of Leo Frank in Georgia, the mass incarceration of Japanese-Americans in World War II, and the massacre of 11 worshippers at the Tree of Life Synagogue in Pittsburgh last October by a neo-Nazi gunman.

Pelosi, Democratic Majority Leader Steny Hoyer and the rest of the House Democratic leadership intended to push through this resolution on Wednesday, but ran into unexpected opposition from the Congressional Black Caucus and the Congressional Progressive Caucus, which demanded that any resolution be broadened to include condemnation of Islamophobia and all other forms of bigotry. Ocasio-Cortez made similar demands.

Responding to popular opposition to both the witch-hunting of opponents of Israeli policies and disgust with Israel’s savage oppression of the Palestinians, three announced Democratic presidential candidates—Senators Bernie Sanders, Elizabeth Warren and Kamala Harris—came to Omar’s defense and cautioned against equating criticism of Israel with anti-Semitism. While the media overwhelmingly promoted the lie that Omar was an anti-Semite, several critical columns by liberal Jewish opponents of the Netanyahu regime appeared in mainstream newspapers.

Following a reportedly tense closed-door meeting on Wednesday of the House Democratic conference, at which numbers of members protested against the witch-hunting of Omar, Pelosi commissioned the drafting of a new resolution that would supposedly avoid targeting Omar and decry all forms of “hate.” Eager to put the controversy to rest, Pelosi rushed to complete the resolution and put it to a vote on Thursday.

In the event, the resolution that was presented and passed on Thursday was essentially the same slanderous text that had previously been drafted, clearly targeting Omar and calling her “dual loyalty” remark anti-Semitic, but adding boilerplate language opposing persecution of and violence against Muslims, blacks and other minorities.

The seven-page document states in its conclusion: “Resolved: That the House of Representatives—(1) rejects the perpetuation of anti-Semitic stereotypes in the United States and around the world, including the pernicious myth of dual loyalty and foreign allegiance, especially in the context of support for the United States-Israel alliance.”

In introducing the resolution on the House floor, Democratic Majority Leader Hoyer made clear that it was aimed against the supposed invocation of anti-Jewish “dual loyalty” libels. Rep. Engel declared that he would vote for the resolution, but criticized it for not focusing exclusively on the issue of anti-Semitism. Ted Deutch of Florida and Josh Gottheimer of New Jersey spoke along similar lines.

Not a single Democrat who spoke, including Pelosi, called out by name Trump or any other Republican ally of fascists, neo-Nazis and anti-Semites. Pelosi made a point of stressing that “Israel is our friend based on shared values and our national interest,” and called for a unanimous vote to approve the resolution.

This enabled the Republicans to posture as the true defenders of the Jews and denounce the Democrats for their “softness” on anti-Semitism and the defense of Israel. Republican Minority Leader Kevin McCarthy, summing up for the Republicans, began by thanking Engel for launching the latest attack on Omar.

The filthy politics behind the anti-Omar operation were given full expression in a column published Thursday by New York Times columnist Bret Stephens bearing the headline “Ilhan Omar Knows Exactly What She Is Doing,” and the underline “The Minnesota Democrat Is Bringing Corbynism to the Democratic Party.”

Stephens is a right-winger, a Zionist and a former columnist with the Wall Street Journal. He concludes his piece as follows:

“It says something about the progressive movement today that it has no trouble denouncing Republican racism, real and alleged, every day of the week but has so much trouble calling out a naked anti-Semite in its own ranks. This is how progressivism becomes Corbynism. It’s how the left finds its own path toward legitimizing hate. It’s how self-declared anti-fascists develop their own forms of fascism.”

Popular opposition to this lying attempt to brand the left as anti-Semitic as well as to the anti-Palestinian policies of Israel, including among Jews, was reflected in the readers’ comments posted on the Times website in response to Stephens’ column. Of the first 15 comments listed under “readers’ picks,” all but two were supportive of Omar and hostile to Stephens.

One gets a sense of the sentiment among wide layers of the population from comments such as these:

“I have been devastated by the increase in anti-Semitism that has arisen as a result of Trump’s intolerant rhetoric. I do not, however, believe that Omar’s comments contribute to this hostile environment. Read her speech at Busboys and Poets [book store] in full and you will see that she is sensitive to and in dialogue with her Jewish constituents. She may have phrased her appeal for the dignity of Palestinians awkwardly and problematically, but, as a Jewish person myself, I believe she is nonetheless correct in her assessment of the dehumanization the Palestinians suffer and of the urgent need to redress it…”

Jimrecht wrote: “Stephens conflates anti-Semitism with opposition to ongoing human rights abuses in Israeli-occupied territories and to the neo-conservative political consensus that promotes them. I am a Jew, born and raised in the US because my grandparents fled persecution in Eastern Europe. My identification is with Palestinian refugees, not with people in positions of power who espouse views like those of Stephens.”

Alexandra wrote: “Spare me the drama, Mr. Stephens. Given the way the Israelis have treated the Palestinians over the last seven decades, the last thing America needs is that government’s values. I frankly don’t see much difference between their behavior and Saudi Arabia’s towards Yemen—the Israelis are simply better at hiding it.

“It’s not anti-Semitic to call Israel out for the overwhelming evidence of its brutality. Frankly, to equate disgust at the Israeli government’s behavior with anti-Semitism is a disservice… If you can’t distinguish between the two, you’re the one with a problem.”