Mueller report is a political debacle for the Democratic Party

On Friday, Special Counsel Robert Mueller concluded his nearly two-year-long investigation, finding no evidence of collusion between the Trump campaign and the Russian government.

“[T]he investigation did not establish that members of the Trump Campaign conspired or coordinated with the Russian government in its election interference activities,” reads a section of the report excerpted by the Justice Department.

Allegations that Trump “colluded” with Russia have been at the center of the Democrats’ opposition to the Trump administration. Beginning with Paul Krugman’s declaration in a July 22, 2016, New York Times op-ed that Trump was a “Siberian Candidate,” the Times, Washington Post and other news media carried hundreds of articles supposedly proving that Trump won the election through a nefarious conspiracy with Vladimir Putin.

But Mueller, the former FBI director whose investigation spanned over 600 days, and who, according to the Justice Department, issued “2,800 subpoenas, executed nearly 500 search warrants, obtained more than 230 orders for communication records… and interviewed approximately 500 witnesses,” could find no evidence of these claims. 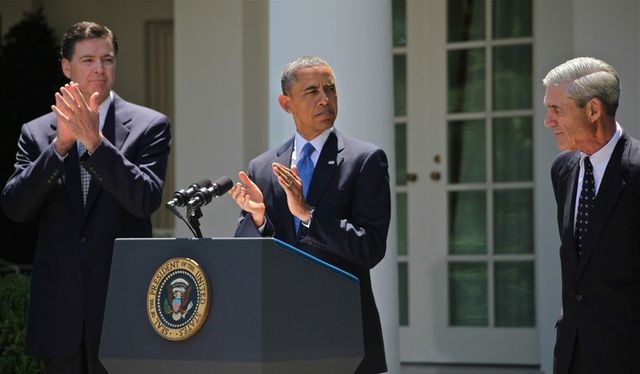 The outcome of the investigation is a debacle for the Democrats and their associated media outlets, leaving the fascist Trump in a stronger political position. “No Collusion, No Obstruction, Complete and Total EXONERATION,” Trump declared on Twitter. Now, as Trump intensifies his frontal assault on the social and democratic rights of the working class, he will have the political wind in his sails.

In the more than two years since Trump’s election, the danger posed by this administration to the working class has become abundantly clear. Trump has used emergency powers to allocate funds not appropriated by Congress for his wall on the US-Mexico border, a vast expansion of executive power directed at the suppression of all opposition. The administration has imprisoned tens of thousands of immigrant children in concentration camps, in what human rights officials have called torture.

In recent months, Trump has declared war on socialism, as part of his appeal to fascistic forces in the United States and internationally. His fascistic rhetoric has inspired neo-Nazi terrorists, such as Brenton Tarrant, who massacred 50 people in New Zealand this month; Robert Bowers, who killed 11 people in a synagogue last year; and James Alex Fields, who drove a car into anti-fascist protesters in Charlottesville in 2017.

There is one clear and inescapable conclusion from the tortuous experience of the past two years: the struggle against the Trump administration cannot be based on the Democratic Party, the rotting corpse of American liberalism.

From the start, the Democrats’ opposition to Trump has centered on differences over foreign policy and how best to secure the predatory interests of American imperialism. Trump’s enemies within the ruling class demanded that the president take a more confrontational stance toward Russia and invest additional military resources in destabilizing and overthrowing the Syrian government.

The dispute, in other words, has been confined to an “intramural scrimmage” (as Obama put it after Trump’s election) between right-wing factions of the ruling elite. A major goal of the anti-Russian hysteria promoted by the Democrats has been to divert the broadly-felt popular hatred and hostility to Trump into a right-wing, pro-war framework, while serving to justify attacks on democratic rights.

The campaign surrounding allegations of Russian “meddling” has been used to legitimize internet censorship, leading to a massive search traffic decline to left-wing sites. It has also been used to demonize WikiLeaks and create the conditions for jailing whistleblower Chelsea Manning and escalating the persecution of Julian Assange.

At the same time, the Democrats have, on many fundamental issues, formed what amounts to a national unity government with Trump. They have rubber-stamped two massive annual increases to the US military budget, fully endorsing Trump’s plan to vastly expand the size of the US military in preparation for “great-power competition” with Russia and China.

In recent months, the Democrats have not only embraced Trump’s trade war against China but have criticized the White House for being insufficiently aggressive in the US campaign against Chinese telecommunications companies. And they have, almost without exception, backed Trump’s demand for regime change in Venezuela.

The Democrats’ main concern has been to avoid anything that would mobilize broader sections of the population. Thus, they have consistently opposed impeachment proceedings, insisting that everything must be subordinated to Mueller’s investigation. The Democrats are far more afraid of the growth of the class struggle than they are concerned about whatever factional differences they have with the present occupant of the White House.

All of this was determined by the class interests of the social forces represented by the Democrats, who speak for powerful sections of the financial oligarchy and military-intelligence apparatus, together with layers of the affluent upper middle class.

Trump is not an aberration. Rather, his administration expresses the most essential characteristics of the capitalist system. It is one symptom of a far deeper disease, of which his opponents within the political establishment are another.

The only social force capable of leading a real struggle against the Trump administration is the international working class. As the World Socialist Web Site wrote in June 2017:

The working class confronts in Trump and his administration a vicious enemy, dedicated to the destruction of its democratic rights and a further lowering of its living standards... The working class must oppose this government and seek its removal. But this task must not be entrusted to Trump’s factional opponents in the ruling class. The working class cannot remain a bystander in the fight between Trump and the Democrats. Rather, it must develop its struggle against Trump under its own banner and with its own program.

The nearly two years since the publication of this statement have been marked by the growth of an international strike movement spanning nearly all countries and industries. Last year, more than half a million US workers went on strike, a 20-fold increase over 2017. Ten years after the 2008 financial crisis, and after decades of social inequality, the working class has emerged on the stage of global politics. The initial expressions of working class struggle will develop and expand in the course of this year.

The growth of the class struggle on a world scale must be transformed into a conscious, international and revolutionary movement against the capitalist system. This is the essential and urgent political task.