25 years ago: The suicide of Kurt Cobain 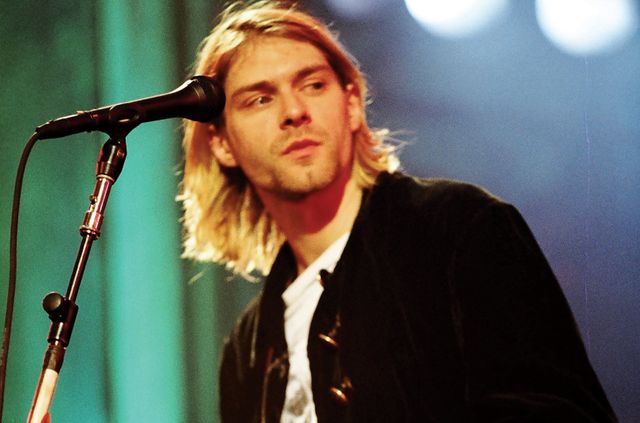 On April 8, 1994, Nirvana’s lead singer Kurt Cobain was found dead in his Seattle, Washington home, from a gunshot wound to the head. An electrician arrived at the house to install a security system and saw the body inside. He called police who broke into Cobain’s house and confirmed later that afternoon that it was Cobain, who had been in and out of touch with friends and family for weeks.

A month earlier, Cobain attempted suicide in Rome with painkillers and alcohol, spending five days in the hospital. Upon returning to the United States with his wife Courtney Love a few weeks later, he locked himself in a room with a gun. Love called police and informed them that Cobain was suicidal. They confiscated a bottle of pills. Love organized an intervention and Cobain agreed to undergo rehabilitation treatment for drug and alcohol abuse.

Cobain arrived at a rehab facility in Los Angeles on March 30. The next day he left the treatment center, flew back to Seattle and disappeared from both public and private life. Nirvana pulled out of an upcoming Lollapalooza show amid rumors in the media that the band was breaking up.

Cobain left a suicide note addressed to his childhood imaginary friend “Boddah,” in which he expressed his unhappiness and dissatisfaction with the music industry and life in general. “All the warnings from the punk rock 101 courses over the years, since my first introduction to the, shall we say, ethics involved with independence and the embracement of your community has proven to be very true. I haven’t felt the excitement of listening to as well as creating music along with reading and writing for too many years now. I feel guilty beyond words about these things.”

“The worst crime I can think of would be to rip people off by faking it and pretending as if I’m having 100% fun,” the note continued. “Sometimes I feel as if I should have a punch-in time clock before I walk out on stage.”

Cobain’s tragic suicide was explained by the media as a mystery, rather than as a product of the exploitation of sensitive artists by the brutal music industry. The best popular music in the period in which Nirvana thrived was permeated with disillusionment, and, much of Cobain’s work, a savage attack on small town middle-class values.

In “Frances Farmer Will Have Her Revenge on Seattle,” from his last album, Cobain sang of the left-wing actress and Seattle native who was blacklisted and eventually institutionalized in the 1940s: “She’ll come back as fire, to burn all the liars, and leave a blanket of ash on the ground.”

Much of Nirvana’s music generated its power from such feelings, and from the gulf between official promises and expectations, on the one hand, and the increasing reality of low-paid jobs and dead-end lives, on the other, which so many of Cobain’s generation faced. 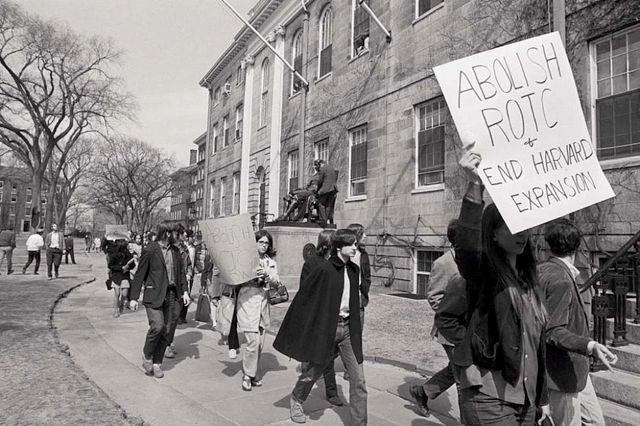 On April 9, 1969, Harvard University students began a series of protests against the Vietnam War. About 500 students held an occupation of the school’s administration building. The occupation was violently broken up by police in the early morning of April 10.

The protest was organized by Harvard’s section of the Students for a Democratic Society (SDS). Starting on the night of April 8, SDS led a march of students to the home of Harvard’s president and attached a list of demands to his front door.

The demands centered on expelling the Reserve Officers’ Training Corp (ROTC) from Harvard. Editors of the Harvard Crimson wrote, “ROTC is based on the notion that the country’s universities should serve the needs of the warfare state” when the “over-expansion of the American military machine has become perhaps the greatest threat of all.”

Other demands included calls for the lowering of rents on university-owned apartments and that working-class residential neighborhoods in the area wouldn’t be torn down to expand campus buildings.

Despite the students pledge to be non-violent, the University turned to the police to forcibly end the demonstration. At 3 a.m. on April 10, 400 police officers used clubs and mace to attack students. Over 100 of the protesters were arrested.

The university dropped most of the charges against the students, with some having to pay a small fine of $20. However, two were convicted of assault and battery and sentenced to nine months in jail. Three other students were permanently expelled from Harvard.

Angered at the response by the university and their turn to the police, students began a campus strike lasting through the week. The strike culminated in a mass meeting of 10,000 people in the Harvard Stadium on April 14. The assembly would vote to continue the strike for another three days before calling an end on April 17. 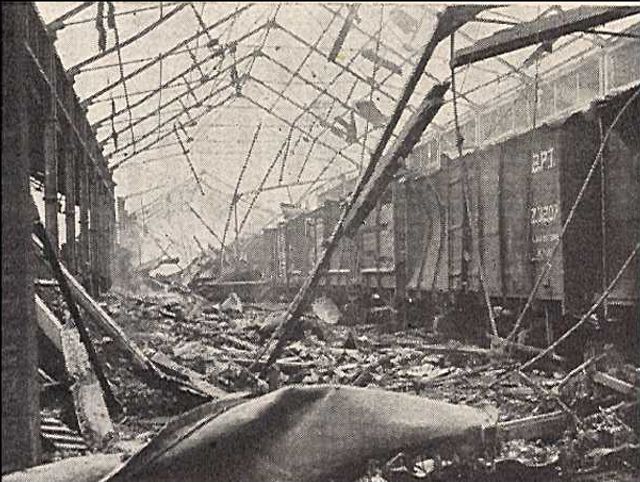 The aftermath of the Bombay ship explosion

On April 14, 1944, the SS Fort Stikine, a British armaments ship, exploded at the Victoria Dock of Bombay, the Indian financial capital now known as Mumbai. The blast killed an estimate 800 to 1,300 people.

The Stikine was carrying 1,400 tons of explosives, to be used in the British war effort against Japan. It was owned by the American war shipping administration, who leased it to their British counterparts. The vessel docked in Bombay on April 12. Engine repairs were conducted and cargo began to be unloaded over the following days.

As a wartime measure, cargo ships carrying dangerous military goods did not fly flags, as they had in peacetime, signaling their hazardous cargo. Military authorities had also ended the practice of unloading such goods offshore onto lighters, meaning that the explosives were to be transferred directly from the ship to port.

At around 2 p.m., on the afternoon of April 14, the Stikine’s crew noticed a fire on board. Over the next hour and a half, firefighters poured 900 tons of water into the ship. This failed to halt the blaze. A little over two hours after the fire began, the ship was broken in two by a massive explosion that resulted in earth tremors and blew out windows up to 12 miles away.

The blast killed 231 ship workers, 66 firemen and over 500 civilians. It injured an estimated 2,500 people. The explosion had a devastating impact on Indian workers and the poor, who lived near the Victoria Dock in shanty-towns. Thousands lost their homes and meagre possessions, and were left homeless and destitute. Some 6,000 companies were impacted by the explosion, with ensuing layoffs destroying up to 50,000 jobs.

In line with wartime press restrictions and the authoritarian practices of British colonial rule, news of the disaster and its impact was heavily censored. Only in mid-to-late May were journalists allowed to send reports on the explosion to Britain and the United States. 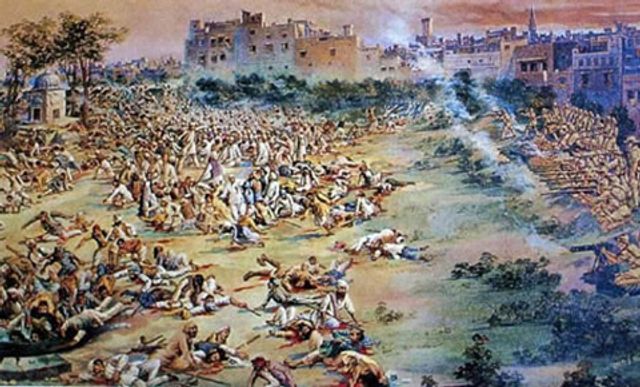 Artist's rendering of the Amritsar massacre

On April 13, 1919, British Indian Army troops under the command of Colonel Reginald Dyer fired into a crowd of people demonstrating in the Jallianwala Bagh, a public garden in the Punjabi city of Amritsar, site of the Sikh Golden Temple. Estimates of the number of men, women and children killed ranged from 379 to 1,526.

Indian nationalists had called the protest to demand the freedom of two Punjabi leaders of the Indian National Congress, Satya Pal and Saifuddin Kitchlew, who had been arrested April 10 and secretly deported from Punjab by the British.

The cause was their opposition to the Rowlatt Act passed by the Imperial Legislative Council in Delhi, which had extended the wartime Defense of India Act of 1915, a series of draconian anti-democratic measures that allowed detention and internment without trial for up to two years and restricted freedom of speech and of movement, overwhelmingly of Indians.

Indian nationalists had already led a hartal (general strike and closure of small businesses) on April 6. There was furious opposition to the Rowlatt Act in Punjab in particular. As one historian notes, “Practically the whole of Lahore was on the streets. The immense crowd that passed through Anarkali was estimated to be around 20,000.”

One of the strongest advocates of the Rowlatt Act was Michael O’Dwyer, Lieutenant Governor of the Punjab, who had already to contend with some of the most militant nationalist activity in India against the British Raj.

April 13 was the holiday of Baisakhi, which marks the Sikh new year, and thousands of farmers were in Amritsar to sell cattle and produce. When the British closed the cattle market early, many farmers joined the protest in Jallianwala Bagh.

The massacre was horrific. The crowd was not ordered to disperse, and Colonel Dyer’s troops fired without warning.

Winston Churchill, himself no stranger to imperialist brutality, described the slaughter in the House of Commons a year later: “Pinned up in a narrow place considerably smaller than Trafalgar Square, with hardly any exits, and packed together so that one bullet would drive through three or four bodies, the people ran madly this way and the other. When the fire was directed upon the centre, they ran to the sides. The fire was then directed to the sides. Many threw themselves down on the ground, the fire was then directed down on the ground. This was continued to 8 to 10 minutes, and it stopped only when the ammunition had reached the point of exhaustion.”

Both Dyer and O’Dwyer justified the massacre and no charges were brought against them. The incident had a radicalizing effect on the Indian population, and in 1940 a survivor of the massacre assassinated O’Dwyer.