Last Friday an enormous fire engulfed a factory used to store chemical waste in the northern Melbourne suburb of Campbellfield. A worker, Vignesh Varatharaja, a refugee originally from Sri Lanka, was badly burned and had to be hospitalised and placed in an induced coma. About 175 firefighters were needed to quench the blaze.

A massive toxic plume of black smoke, visible from central Melbourne 30 kilometres away, covered a large area in the city’s north and triggered emergency health alerts. Residents in the working-class suburbs of Campbellfield, Broadmeadows, Pascoe Vale and Coburg were advised to take shelter indoors immediately. Eleven local schools were closed for the day, while 12 more reportedly telephoned families asking them to collect their children.

As it is not known exactly what chemicals were being stored at the site, the health danger posed by the fire remains unknown. 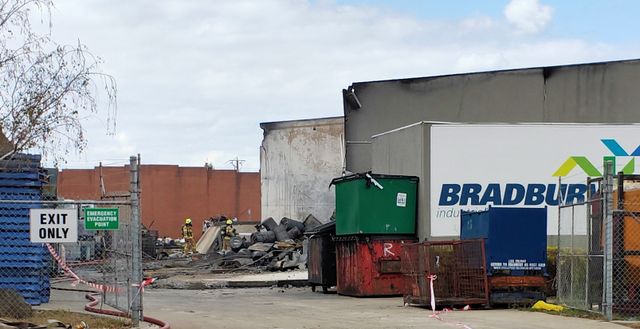 Firefighters at the scene of the blaze

The fire is only the latest in a series of incidents in Melbourne involving toxic and other industrial waste storage. All have affected working-class areas and all were the product of the subordination of public health and safety to the corporate profit interests.

There have been eight factory fires in Melbourne since October. One of the schools affected by Friday’s fire, Broadmeadows Primary, has been forced to shut down multiple times in recent years due to dangerous fires, including at Coolooro’s SKM Recycling factory and at a nearby tyre dump. In the western suburbs, an enormous fire erupted in Tottenham last September in a factory used to store chemicals.

The Tottenham fire triggered ongoing investigations by the Environmental Protection Agency (EPA). The Age reported that the EPA discovered a massive, illegal toxic dumping operation across Melbourne’s northern suburbs, with up to 19 million litres of waste stockpiled. This is ten times more than was previously estimated.

In recent months, investigators uncovered multiple warehouses in Epping and Campbellfield. “When discovered,” the Age wrote, “the warehouses were packed almost floor-to-ceiling, wall-to-wall with industrial-size plastic containers and drums.”

The newspaper also reported that government documents last December assessed the potential consequences of a fire or spill at these sites as “MAJOR” and representing a “danger to life.”

Despite this, the state Labor government in Victoria has done nothing to resolve the toxic waste storage crisis. Corporate operators continue to get away with blatantly unsafe practices, and the EPA remains an underfunded and largely toothless body.

The EPA inspected the Campbellfield factory that went up in flames last Friday as recently as March 13. According to the Age, inspectors found “leaking containers and spilled chemicals on the factory floor,” with safety breaches described as “extremely alarming.” The site had more than 400,000 litres of chemicals, three times the authorised amount.

The EPA suspended Bradbury Industrial Services’ licence to process toxic chemical waste. Yet apparently no other sanction was imposed, nor any steps taken to resolve the health and safety hazard. Another inspection was carried out last Thursday, the day before the fire, with EPA staff reportedly discovering that the site still had 300,000 litres of chemicals.

The Herald Sun reported: “The site has a chequered history. The first non-­ compliance notice issued to Bradbury Industrial Services was in 2012, when operating under a different name—Resolve Waste Management. The company was given an official warning for not complying with site requirements. It was also fined $15,000 in 2016, but not convicted, after a 2013 fire at another Campbellfield site in Merola Way.”

Despite these circumstances, Labor Premier Daniel Andrews issued an extraordinary statement on Friday—before any serious investigation had commenced into the cause of the fire—declaring that “this is not a suspicious fire.”

Toxic waste disposal is big business. Three major corporations dominate the market—SUEZ Recycling & Recovery, Veolia Environmental Services, and Cleanaway Waste Management. Cleanaway is listed as one of the top 100 companies on the ASX stock exchange, with annual revenues of $1.5 billion. A 2017 government report found that these corporations process about 80 percent of all hazardous waste, with the other 20 percent handled by smaller business operators.

As reported by the Age: “This new ‘business model’ sees cowboy operators—and organised crime gangs—offer to remove waste at below-market rates to businesses wanting to avoid paying expensive disposal fees to licensed operators. Many of the chemicals being found at illicit sites are used by heavy industry and are expensive to dispose of properly. In many cases, landlords or a local council are forced to pay to clean up the mess left behind by rogue operators.”

A firefighter who works in Melbourne’s northern suburbs, and who has responded to numerous factory and warehouse fires, told the World Socialist Web Site: “The reality is that we don’t know how many [chemical sites] there are out there. These are big businesses. What are they going to get from the government? What fine will they get? They’ll get f*** all. They’re willing to take the hit when they get caught because of the money they’re making. It’s huge.”

The ability of waste disposal operators to act with impunity is a consequence of the state Labor government’s promotion of deregulation and privatisation measures aimed at boosting corporate profit rates. Every sphere of social life is now subject to corporate profiteering, including the disposal of hazardous waste.

The needs and interests of working-class people count for nothing. Workers in Campbellfield and surrounding suburbs have been badly affected by the protracted de-industrialisation of the economy, which was worsened by the liquidation of the Australian car industry in 2013 that saw the shut-down of the Coolaroo Ford plant. Yet nothing has been done by governments—Labor or Liberal—to address the depression level joblessness in the area—23 percent in Coolaroo and 25 percent in Broadmeadows.

The trade unions have policed the many factory closures in the area and continue to enforce onerous and unsafe working conditions in remaining plants. Workers at the Campbellfield toxic waste factory were covered by the Australian Workers Union (AWU), which is yet to explain its failure to ensure the safety of workers in the factory and surrounding suburbs.

Twenty of the 50 workers at the plant reportedly migrated to Australia on refugee and bridging visas, which makes them ineligible for unemployment benefits. The AWU’s only response has been to set up an online fund appeal for the badly injured worker.