In meeting with Egyptian dictator, Trump rails against immigrants

Just as he did when Sisi visited in April 2017, Trump used the opportunity to solidarize himself with a regime established by a military coup against Egypt’s democratically elected president Mohammed Mursi of the Muslim Brotherhood in 2013. Since coming to power, el-Sisi’s regime has slaughtered thousands of protesters and continues to hold tens of thousands of political dissidents, as well as dozens of journalists, in jail. 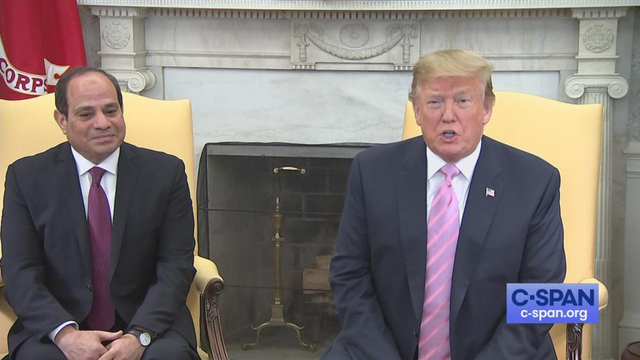 Sisi and Trump at the White House. Credit: C-Span

“We agree on so many things,” Trump declared. “I just want to let everybody know, in case there was any doubt, we are very much behind President el-Sisi. He’s done a fantastic job in a very difficult situation.”

Sisi has won the admiration of the imperialist powers, including Germany and France, for his leading role in suppressing the revolutionary movement of workers and youth which resulted in the ouster of longtime US-backed dictator Hosni Mubarak in 2011 and inspired millions around the world.

Trump’s stamp of approval comes several weeks before a scheduled referendum in Egypt which would amend the country’s constitution to allow el-Sisi to serve for another 12 years beyond the end of his current term, subordinate the judiciary to his control and give the military tighter rein over the political process.

A White House official told reporters ahead of el-Sisi’s visit that the two leaders would discuss Egyptian border and maritime security, counter-terrorism efforts, the Sinai and economic development during closed-door meetings. Congressional leaders sent a letter to Secretary of State Mike Pompeo on Monday advising the Trump administration to use the cover of rampant human rights abuses in order to pressure Egypt over a recent $2 billion arms deal with Russia to purchase over 20 Sukhoi SU-35 fighter jets.

The Trump administration has made none of the pretenses over human rights abuses evinced by the Obama administration after it suspended aid shipments for two years following the 2013 coup. Over the last two years, Congress has approved the Trump administration’s request for nearly $3 billion in aid to the Sisi regime. Another $1.4 billion is in the pipeline for 2020. The Pentagon approved a $1 billion arms sale to Egypt at the end of last year, including 10 AH-64E Apache attack helicopters.

With el-Sisi’s visit coming a few days after Trump purged several of his top security officials, including those responsible for policing immigration and the US border, the US President did not have arms deals, human rights abuses or the Sinai on his mind during his appearance in the Oval Office.

Sitting side by side with the butcher of Cairo yesterday, Trump launched into a fascistic rant against migrants seeking to cross from Mexico into the United States and laws which supposedly blocked him from expelling hundreds of thousands of immigrants en masse. “We have the worst laws of any country anywhere in the world,” Trump fumed, listing “catch and release,” “chain migration,” the visa lottery, and asylum as those laws and policies he wanted to do away with.

When asked last week about his rationale for withdrawing the nomination of the acting head of Immigration and Customs Enforcement Ronald Vitiello to become the agency’s permanent director, Trump explained that “We want to go in a tougher direction.” This was followed by the forced resignation of Kirstjen Nielsen, the head of the Department of Homeland Security and the firing of Randolph Alles, the director of the Secret Service.

The purge was led by Trump’s fascistic adviser Stephen Miller, who pressed for a full travel ban on Muslims as well as the separation of children from their families at the border in the early days of the administration. He has now reportedly consolidated control over immigration policy.

Trump denied reports during Tuesday’s press conference that he was “cleaning house.” Instead he focused his ire on impoverished Central American and Mexican men, women and children seeking asylum in US. “It’s ridiculous. You have people coming in claiming asylum. They’re all reading exactly what the attorney gives them. They have a piece of paper. ‘Read what that is.’ And all of a sudden you’re entitled to asylum.”

He railed against the Ninth Circuit Court of Appeals, which handed down an order Monday blocking his administration’s “Remain in Mexico” policy that forces those seeking asylum in the US to wait on the Mexican side of the border until their cases are heard in immigration court, a process that can take months or years. “Nobody can believe these decisions that we’re getting from the Ninth Circuit, it’s a disgrace. So we’re fighting the bad laws.”

“But we’re bucking a court system that never ever rules for us,” Trump boasted. “And we’re bucking really bad things with Congress, with the Democrats in Congress not willing to act.” Last month Trump declared a national emergency at the border in order to illegally reapportion Pentagon funding without Congressional approval for the construction of a wall along the US-Mexico border. Several thousand active duty soldiers have been deployed to the southern border since last year to build barriers and reinforce border patrol agents who have detained tens of thousands of migrants in recent months.

Trump’s xenophobic rant in the presence of the dictator el-Sisi serves as a strong warning, a massive escalation of the war against immigrants and the repression of an expected upsurge of the working class is being prepared. Trump sees in el-Sisi’s brutal and systematic repression of mass popular opposition in Egypt a model for his own response to the eruption of any movement from below challenging the rule of America’s capitalist oligarchy.