These discussions are part of a sharp intensification of the pogromist assault on immigrants that Trump has made the centerpiece of his domestic policy.

NBC cited two unnamed Pentagon officials and one from the Department of Homeland Security (DHS) who were “familiar with the conversations.” Potential projects include using troops to conduct land assessments before the construction of new tent cities in El Paso and Donna, Texas and a new central processing center for migrants in El Paso. The latter is to be similar to one currently operating in McAllen, Texas, where children were held in cages last summer while the administration’s family separation policy was in effect. 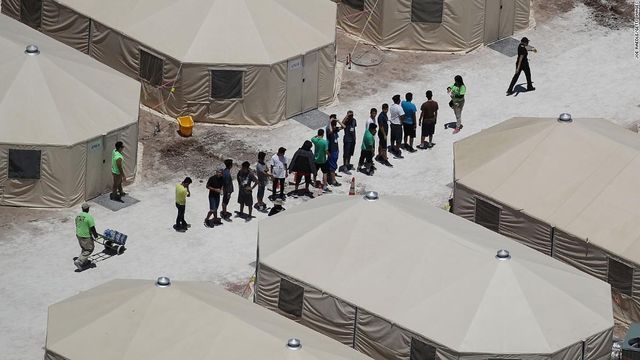 One of the officials said recent meetings have discussed whether using active duty troops to run a detention camp would violate the Posse Comitatus Act, which bars the military from engaging in law enforcement activities within the borders of the United States. Citing one of its sources, NBC added that the idea of military-built and run migrant prisons has “trickled down into planning meetings this week at DHS.”

The Defense Department issued a statement saying it could be involved in construction of new detention facilities.

Trump is escalating his fascistic persecution of immigrants and pressing for openly illegal policies to create a system of internment centers recalling the camps that imprisoned hundreds of thousands of Japanese-Americans during World War II. He is increasingly asserting authoritarian powers and rejecting any congressional control.

On Wednesday, during a visit to San Antonio, Texas, Trump said, “I’m going to have to call up more military. Our military, don’t forget, can’t act like a military would act. Because if they got a little rough, everybody would go crazy… They have all these horrible laws that the Democrats won’t change.”

What Trump means by getting “a little rough” is indicated by what he told Fox News’ Sean Hannity last month—that ordering troops to turn machine guns on the men, women and children seeking asylum would be “a very effective way of doing it.”

Also on Friday, the New York Times reported that during his visit last Friday to the California border town of Calexico, Trump told the then-head of Customs and Border Protection (CBP), Kevin McAleenan, to bar asylum seekers from entering the country and promised to pardon him if he encountered any legal problems.

That visit was followed by a purge of the DHS, including top officials of its immigration units. Trump fired DHS Secretary Kirstjen Nielsen, reportedly because she resisted resuming the policy of family separations and illegally blocking refugees from entering the US to file asylum claims. He dumped the acting deputy head of DHS in order to elevate McAleenan to the post, and he fired the director of the Secret Service.

These anti-democratic moves coincide with an escalation of Gestapo-like raids on worksites with immigrant workers, including an April 3 raid on CVE Technology in Allen, Texas in which Immigration and Customs Enforcement (ICE) agents arrested 280 employees.

These terror tactics are supposedly in response to a crisis at the border caused by an unprecedented flood of undocumented migrants. There has been a surge in border apprehensions, with more than 361,000 arrests in the first half of fiscal 2019, the highest level since 2007, according to CBP. However, this is due to the deliberate policy of slowing the acceptance of asylum claims at ports of entry to a crawl, forcing desperate families fleeing murderous violence and poverty in Central America to illegally cross in more remote areas.

The intensified crackdown is the culmination of a steady escalation of the war against immigrant workers carried out by the Trump administration over the past five months.

Since the release last month of the Mueller report, puncturing the Democrats’ claims of Trump-Russia collusion in the 2016 elections, Trump has escalated his campaign against migrants.

The Democrats and the media aligned with them such as the New York Times and the Washington Post have played down Trump’s threat to set up military-run prison camps for migrants. Instead, they have focused on his talk of busing arrested immigrants to Democratic-run “sanctuary cities,” which impose limits on local collaboration with federal deportation cops, as a form of political retribution.

Trump has been able to carry through his anti-immigrant program, despite popular opposition, because the Democrats have done nothing to seriously oppose it. On the contrary, they are increasingly accommodating their rhetoric and policies to the far-right anti-immigrant witch-hunt.

Last Sunday, at a campaign event in Iowa, Bernie Sanders went out of his way to reject a policy of open borders, echoing the efforts of Trump, Stephen Miller, Stephen Bannon and company to pit native-born workers against their class brothers and sisters from Mexico and Central America. “You open the borders, there’s a lot of poverty in this world,” he said, “and you’re gonna have people from all over the world. I don’t think this is something you can do at this point.”

Sanders’ statement prompted praise from Richard Spencer, the neo-Nazi who helped organize the fascist riot in Charlottesville, Virginia in 2017, who tweeted, “Bernie returns to form.”

Jeh Johnson, who presided over the highest level of deportations in US history while serving as DHS secretary under Barack Obama, told Fox News on Thursday, “By any measure, 4,000 arrests in a day, 100,000 in a month…is a crisis. It’s a crisis because it overwhelms our Border Patrol and our immigration officials’ ability to deal with it…”

He went on to label Central America “the most violent region of the world” and call for bipartisan unity to address the “crisis” by “changing” immigration law.

Democratic House Speaker Nancy Pelosi argued on Thursday that the Democrats should not formulate an alternative immigration policy to Trump’s for the 2020 elections, and proceeded to outline the Democrats’ own right-wing program. “We have our principles that we’ve established,” she said, “secure our border, respect the dignity of people coming here, have a path to citizenship that is a strict one.”

Finally, the New York Times gave the signal for a wholesale shift to the right by the Democratic Party by publishing a front-page article Wednesday under the headline: “Migrants Pour Into a System that’s ‘on Fire:’ US Border Could Be at a Breaking Point.” The article blamed the supposed emergency at the border on “legal loopholes” in the immigration system.

Trump’s increasingly hysterical attacks on immigrants and efforts to establish a personalist regime, along with his repeated denunciations of socialism, reflect an acute crisis of the American political system. The ruling class is petrified by the growth of working class opposition in the US and internationally. Both parties react by seeking to shore up the state against the threat from below and channel social opposition in the reactionary direction of nationalism and militarism.

It is all the more urgent that all workers and youth take up the defense of the right of immigrants to live and work in the country of their choice without fear of deportation or repression. This is essential to the unification of the working class in the fight for socialism.