Nearly 2,000 nurses, technicians and other hospital support staff walked out on strike Monday at Mercy Health St. Vincent Medical Center in Toledo, Ohio. The walkout began after hospital workers rejected the “last, best and final” contract offer, which maintains exhausting “on-call” schedules for nurses and offers an insulting one percent raise that would be more than eaten up by higher out-of-pocket health care costs.

Hundreds of picketing workers lined the streets in front of the medical center as cars, trucks and public busses honked their horns in solidarity. The strikers—made up of female and male workers, young and old, black, white and immigrant—enthusiastically waved their picket signs and homemade placards. 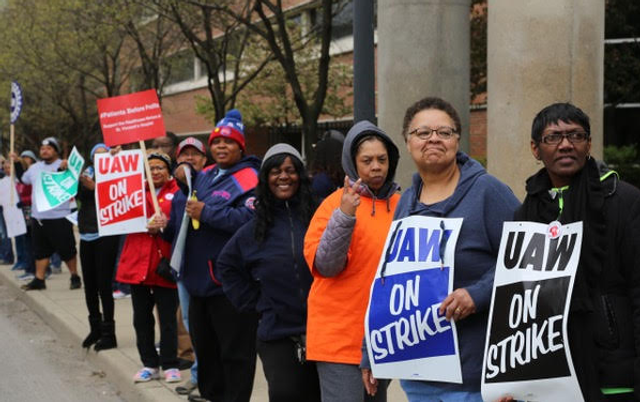 The workers are members of the United Auto Workers. The UAW only called the strike after extending the old contract for months and after the failure of a federal mediator to broker a resolution.

Facing intense competition in the $3 trillion health care market from “nontraditional” companies like CVS-Aetna and Amazon, hospital chains have engaged in a record number of mergers aimed at slashing costs, eliminating jobs, and gaining market share in the US and internationally. Mercy Health recently merged with a major hospital system in Ireland as part of its expansion into Europe, while its chief competitor in the Toledo area, ProMedica, is branching out into China. 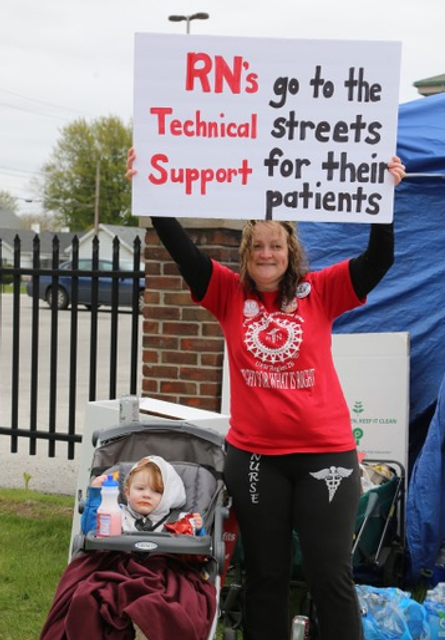 Michele and her grandchild

“We’re taking a stand. I live on my own and pay my own bills, but we have to fight, or it will only get worse,” Michele, a nurse with 23 years’ experience, told the World Socialist Web Site. “On TV, the hospital executives are saying we’re understaffed because of a nursing shortage. But they’re not even posting up jobs to hire more nurses. They’re just crunching the numbers to get us to take on more work so they can save money.

“We’re working in health care, and you would think we have good medical plans. Instead, they want an open-ended contract that would allow them to double our deductibles in the second and third year of the contract if they wanted to. We are losing pay by striking. I might even lose my job, but it’s not going to change unless we stand up.”

Michele described the grueling schedules for the nursing staff. “I’ve worked 26 hours straight without relief and had to sleep in my car for six hours before I could drive home safely. Then you’re off one day, and it starts all over again. It’s unhealthy for the staff and for patients too. I’ve got Type 1 diabetes, and because of the stress my blood sugar can go out of control.

“At the Mercy Cancer Center there used to be four to five nurses for every 16-24 patients. This year it’s 32-35 patients with just four nurses or maybe five if you’re lucky. They’ve doubled it in a year. They also overbook the patients and make them wait for hours to get treated. We’ve helped the hospital reach 99 percent of its goals, and they want more.

“There is strain on all the hospital workers—technicians, pharmacists, surgical aides. We try to give the best care we can, but we’re exhausted. It’s like the teachers who are going on strike now. They are stressed too with 35 kids in a class. I always think, this could be my last day of work if I don’t take care of myself. How can you care for others if you’re not healthy?”

Asked about the enormous inequality in America, with three billionaires controlling more wealth than the bottom 160 million people, Michele commented, “Capitalism is scary. Health care should be socialized and run for human need, not profit.” 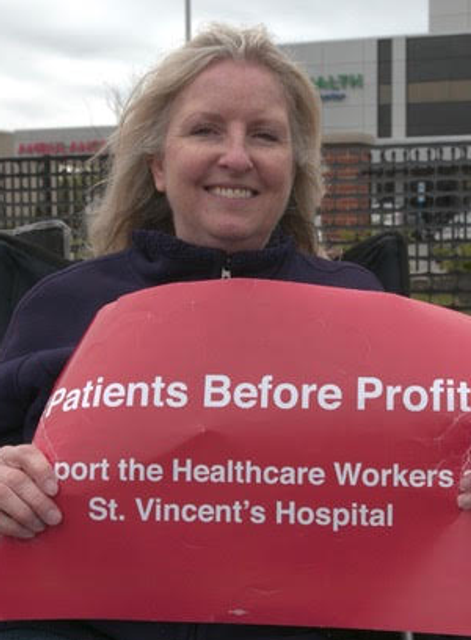 Tina, a veteran nurse with 30 years at the hospital, said, “This is the first strike since I started working here in 1989. That’s just how bad it’s gotten. We need more staffing. Our health care plan is terrible, and they are trying to take away our pension. We are also forced to be ‘on call.’ Matt Sapara, the hospital’s vice president, says its voluntary, but that’s not true. They constantly push more work on you. We’re wearing too many hats. They also want to base compensation on ‘patient satisfaction.’ But nobody is satisfied when the hospital is understaffed, and patients are forced to wait for treatment. So, we get blamed for that.

“They want to get rid of the older nurses and hire new staff who will be too scared to speak up. It’s like this all over. The inequality in America is getting really bad, and it’s got to change.”

A dietary worker with 12 years said that they were short staffed, and that starting pay was only $14 an hour. A pharmacy worker said about her health care, “You can only go to Mercy facilities, and your deductibles are so high. My insurance when I worked at Circle K, a gas station, was better than here. We are just living paycheck to paycheck. My husband works, so I’m lucky, but there are single mothers here.”

The strike in Toledo is part of the growing wave of strikes in the US and internationally. Today, tens of thousands of teachers in the state of Oregon are walking out of classes. They are demanding higher wages and more school funding from the Democratic-controlled state government, which has handed over huge tax cuts to giant corporations like Nike, run by one of the world’s richest men.

Also today, thousands of drivers for Uber and Lyft are planning to strike during peak hours on the eve of Uber’s initial public offering, which will further enrich its wealthy investors. Drivers are protesting in more than a dozen cities, including New York City, Los Angeles and Boston, along with cities in Europe, South America and Australia. They are protesting their pariah status as “independent contractors,” instead of employees, which allows the ridesharing companies to avoid paying the minimum wage, overtime, workers compensation, unemployment benefits, paid sick leave or on-the-job expenses. 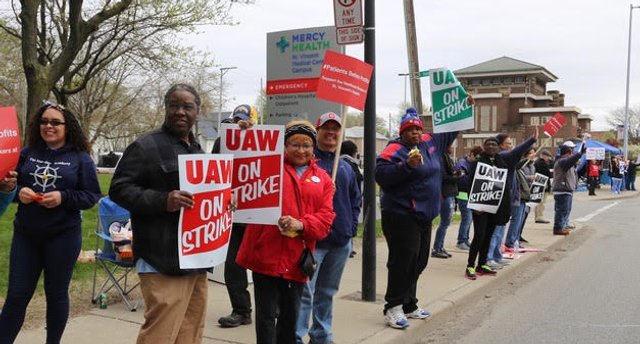 Thousands of University of California health care workers are preparing for a one-day strike next week on May 16 against contracting out jobs, after 40,000 participated in limited strikes in March and April. Thousands of teachers in California’s state capital Sacramento are expected to strike for the second time on May 22, after earlier strikes this year in Los Angeles and Oakland, California, Denver, Colorado, West Virginia and the Carolinas.

More than 100 charter school teachers are currently on strike in Chicago, after an earlier strike by grad students at the University of Illinois-Chicago, and 22,000 Chicago Public School teachers are facing the expiration of their contract on June 30.

Industrial workers are also coming into action. Auto parts workers at a plant in Saline, Michigan owned by French conglomerate Faurecia have voted by 97 percent to authorize the UAW to call a strike when their contract expires later this month. Just over four months before contracts expire for 150,000 General Motors, Ford and Fiat Chrysler workers, autoworkers are determined to abolish the two-tier system and other concessions granted by the UAW, fight plant closings and win substantial improvements in pay and working conditions.

Last week’s Labor Department jobs report showed that workers only got an average hourly pay raise of six cents in April, up from a meager four cents the month before, despite the lowest official unemployment rate since 1969. Despite the supposed “economic boom,” the real wages of workers continue to stagnate even as employers shift the cost of health care and pensions onto their backs.

Insurance premiums have jumped dramatically in the last 20 years, from almost $6,000 in 1999 to more than $18,000 in 2016, according to a report released late last year by the Economic Policy Institute. Between 2006 and 2016, out-of-pocket expenses rose more than 53 percent. Health care expenses accounted for 51.7 percent of the average annual earnings for the bottom 90 percent of the workforce in 2016, compared to 25.6 percent in 1999.

This process was accelerated under President Obama’s supposed health care reform, which was largely authored by the large insurance companies, pharmaceutical and hospital giants. It includes incentives for health care providers to cut costs and increase the exploitation of health care workers to avoid penalties and receive Medicare reimbursements.

Far from opposing this, the UAW, whose top officials have been convicted for taking bribes from Fiat Chrysler executives, has colluded with the employers to freeze real wages and relieve employers of their health care and pension obligations. 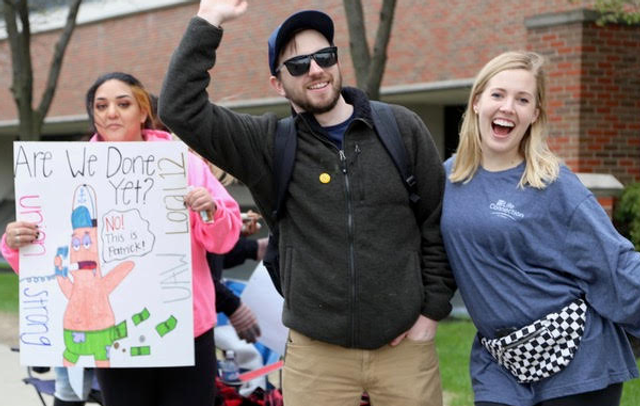 This underscores the need for hospital workers to take the conduct of the fight into their own hands by building rank-and-file committees to spread the strike throughout all of all Mercy Health and ProMedica facilities. They should appeal for mass picketing and sympathy strikes by autoworkers at the giant FCA Jeep factory and other workplaces. The heroic traditions of 1934 Toledo General Strike must be revived based on the principle that “An injury to one is an injury to all!”

“This is all about working longer and longer hours,” said Jacob, a young ground crew member for St. Vincent’s Life Flight medivac helicopter. “It takes a mental and a physical toll on you and your family. I’m in the low tier pay bracket, and I’m living from paycheck to paycheck. Right now, I’m young enough to be on my parents’ health care plan, but soon that won’t be the case.

“I didn’t know about the teachers in Oregon or the Uber drivers going on strike tomorrow, but people are getting fed up. A general strike would be a good thing. Of course, we don’t want to stop providing care for people because that’s what we do, but we have to draw the line somewhere.”