Six lives were lost to a fire that ravaged a Harlem, New York City apartment early Wednesday morning, including those of four young children and their mother. 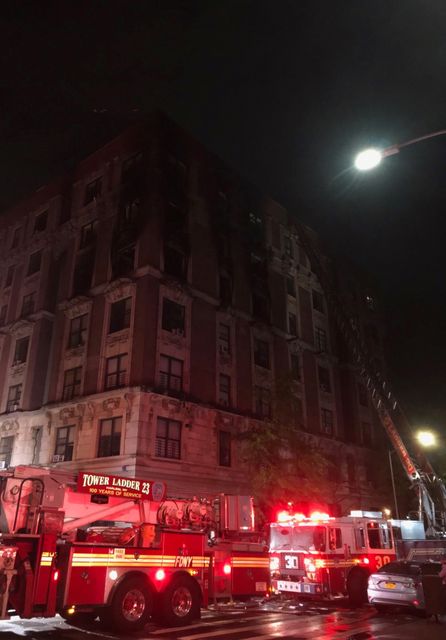 The six-room apartment, on the fifth floor of a seven-story building on Seventh Avenue near 142nd Street, caught fire at about 1:40 am. Firefighters found Andrea Pollidore, 45, her adult son, Matt Abdularaph, 32, and her younger children—Nakiyra, 11; Andre, 8; Brooklyn, 6; and Eljah, 3—unresponsive in two back bedrooms. They were pronounced dead at the scene.

In addition, three people suffered minor injuries due to smoke inhalation as residents of the building were forced to evacuate. “There was so much smoke, you couldn’t even see,” said Geraldo Morales, 55, who fled down the fire escape with his 75-year-old mother.

The Pollidore family was unable to escape the inferno because the apartment was constructed with the kitchen, where the fire began, next to the front door, while the bedrooms were the farthest rooms from the windows and the fire escape.

Multiple neighbors reported that they heard the children screaming for their lives after the flames burst through the four windows of the apartment, where they left long black marks like four fingers reaching up the corner of the building.

It reportedly took nearly two hours for about 100 firefighters to bring the blaze under control. 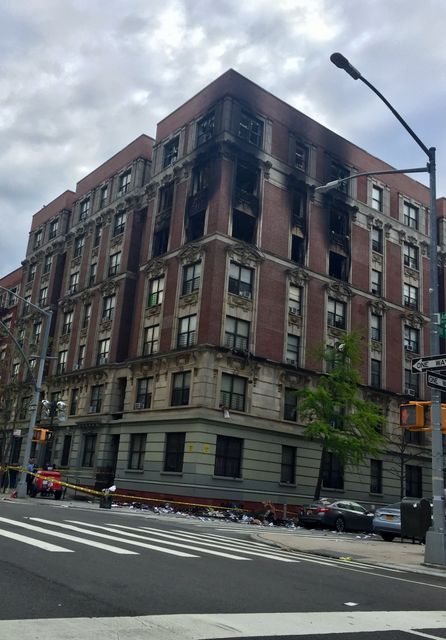 The 109-year-old apartment building is one of forty Frederick E. Samuel Houses, public housing operated by the New York City Housing Authority (NYCHA). It failed an inspection by the Department of Housing and Urban Development in February 2017. While NYCHA reported that smoke alarms in the building were tested and approved in January 2019, the failure to rouse the tenants in time to escape is as yet unexplained, as is the seemingly rapid spread of the fire.

Investigators have theorized that the fire began after Pollidore fell asleep while something was cooking on the stove. Local news media were quick to place blame on her without specific evidence. A photograph of Pollidore in scrubs and a white coat suggests that she was a hospital worker, a position with long and irregular hours that might explain why she was cooking so early in the morning and why she may have fallen asleep.

Raven Reyes, a 27-year-old surviving daughter of Pollidore, said that her mother had suffered from memory loss and first-degree burns after escaping a previous fire in a Bedford-Stuyvesant, Brooklyn brownstone in 2013.

“She fought to remember her first kids, to have more kids, to graduate from college, to get her nursing degree, associate’s degree,” Reyes said. “She did that for us.”

While the specific cause of the fire is yet to be determined, decades of official neglect and severe budget cuts at all levels of government have created virtually unlivable conditions for the approximately 400,000 working-class residents in NYCHA housing. Critically important repairs often take months or even years to be completed.

The deplorable and dangerous conditions under which NYCHA’s tenants are forced to live were illustrated by a recent local media report that three buildings on the Upper West Side of Manhattan, containing nearly two dozen apartments, have been without gas for six months. One of the residents, Willie Wiggins, told CBS, “Everybody’s suffering right now ‘cause you can’t cook, can’t cook a decent meal.”

This is by no means an isolated incident. It was reported earlier this year that NYCHA residents in the Bronx had gone without heat for a decade. Tenants who are forced to employ improvised means for heating and cooking face a substantially increased danger of accidental fires. A recent report by the Regional Plan Association concluded that if objective evaluations were conducted by health and safety investigators—which has not been the case—a significant proportion of the NYCHA system would likely be declared uninhabitable. Current estimates of the cost of necessary repairs and upgrades run in the neighborhood of $45 billion.

The critical shortage of decent, affordable housing in New York and across the country forces millions of workers and their families to live in overcrowded, unsafe homes owned by landlords whose top priority is profit rather than the safety and well-being of their tenants. One result is that nationwide more than 2,300 home fire deaths were reported last year, up from 2,152 the previous year. Indeed, it is remarkable that such tragic fires and other deadly incidents do not occur even more frequently.

Deadly fires and other such tragedies are the inevitable result of the capitalist system, and the extreme social inequality it generates, denying workers the right to decent, affordable, and safe housing.