A gathering of warmongers marks the 75th anniversary of D-Day in Portsmouth, England

An assembly of political bankrupts and warmongers gathered in Portsmouth, England, for the 75th anniversary of D-Day, the largest combined land, air and naval operation in history that heralded the final defeat of Hitler’s fascist armies in World War II.

On June 6, 1944, Allied forces, led by Britain and the United States, landed at several locations in Normandy, France, in the opening shot of their successful invasion of Nazi-occupied western Europe. The operation involved 160,000 troops, almost 5,000 assault and landing craft, 277 minesweepers and 289 escort vehicles. During the mass slaughter of D-Day and the following days nearly 20,000 troops—Allied and German—lost their lives.

Attending yesterday’s event was US President Donald Trump on the last day of his state visit to the UK; Prime Minister Theresa May, who steps down as Conservative Party leader tomorrow and as prime minister in July; French President Emmanuel Macron; German Chancellor Angela Merkel and leaders and representatives from Canada, Australia, Belgium, the Czech Republic, Denmark, Greece, Luxembourg, the Netherlands, Norway, New Zealand, Poland and Slovakia. 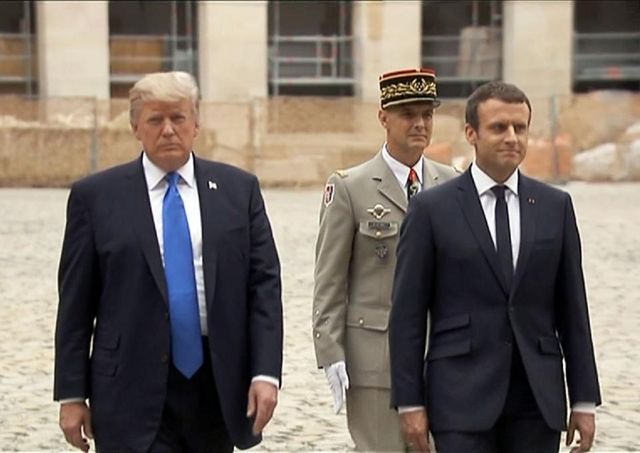 The event was presented as a coming together of the world’s main powers, who endorsed a proclamation pledging to ensure the “unimaginable horror” of the war is not repeated. But nothing could obscure the fact that the commemoration was held against the backdrop of a historic breakdown in relations between the major powers, with the growing danger of war dominating global politics.

The declaration drawn up by Downing Street for the event, the “D-Day Proclamation,” read: “Over the last 75 years, our nations have stood up for peace in Europe and globally, for democracy, tolerance and the rule of law.”

In contrast, Trump has used his UK visit to denounce the European Union, seizing every opportunity to proclaim his support for Brexit as part of the strategic goals of his administration to see the end of the bloc.

Far from shying away from the horrors of war, this time fought with nuclear weapons, in June 2016—in May’s very first speech in Parliament as prime minister—she replied, “Yes” in response to this question from an MP: “Is she personally prepared to authorise a nuclear strike that could kill 100,000 innocent men, women and children?”

Ever since, May, as the leader of a NATO power that has supported every war waged by US imperialism, including Afghanistan, Iraq, Libya and Syria, has advanced a militarist agenda at the centre of which have been demands for a more aggressive stance against Russia.

In Portsmouth, President Emmanuel Macron had the gall to read out from a letter sent by a young resistance fighter, Henri Fertet, before he was executed by Nazi troops at the age of 16. The letter said: “I am going to die for my country. I want France to be free and the French to be happy.”

Yet it was only last year that Macron, during a tour of World War I battlefields, hailed France’s fascist dictator, Marshal Philippe Pétain. Pétain was the leader of the Nazi-collaborationist Vichy regime, the bloodiest and most reactionary that France has ever known. The same Nazis who executed Fertet were supported to the hilt by Pétain, who Macron said it was “legitimate” to describe as “a great soldier.”

How pronounced inter-imperialist rivalries have become is underscored by Macron originally planning to absent himself from a commemoration today at Courseulles-sur-Mer, in the centre of Juno Beach, one of the five landing areas of the Normandy Invasion. An Elysee Palace spokesman said Prime Minister Edouard Philippe would attend instead.

Summing up the strained relations among the imperialist powers, Francois Heisbourg, a former French diplomat and head of the International Institute for Strategic Studies, told AFP, "There's a high risk that Donald Trump uses the ceremonies to remind everyone about the dependence of Europe on the United States for its security and defence."

This plan was only changed at the eleventh hour with an announcement that Trump, Macron and May will all now attend the ceremony at Courseulles-sur-Mer.

Also speaking at Portsmouth was German Chancellor Angela Merkel who said it was a “gift of history” to be able to participate as “this unique military operation eventually brought us the liberation from the Nazis.” This followed a statement Tuesday that, “We can be glad that at the end of this terrible World War II that was started by Germany, we have an order that produced the European Union, that secures our peace, that secures our stability.”

One would never know that Merkel heads a government that has been ramping up Germany’s war machine under conditions of a developing trade war in the era designated by the Trump government as one of “great power conflict.” Only last month, Merkel declared in an unprecedented statement of hostility towards the Trump administration, “The old certainties of the post-war order no longer apply.”

China, Russia and the United States “force us time and again to find common positions,” Merkel added. In relation to the declared aim of Germany and France for the building of a European Army, she said, “As far as defense cooperation is concerned, we are making good progress.”

Merkel’s hailing of the “liberation” of Europe from the Nazis reeked of hypocrisy. The far right, including outright apologists for Hitler’s crimes, have been given their head by successive German governments she has led, with the Alternative for Germany (AfD) now the largest opposition party in the Bundestag to the Grand Coalition between Merkel’s Christian Democratic Union and the Social Democratic Party.

Citing the text of the D-Day Proclamation, the Guardian commented that the section of it, “We commit to work constructively as friends and allies to find common ground where we have differences of opinion and to work together to resolve international tensions peacefully,” was “an attempt to nudge President Trump away from isolationism and back towards upholding what is described as the rules-based international order (RBIO).”

This is only one element of the proclamation—and a secondary one at that. The Guardian also noted another section that states, “We will act resolutely, with courage and tenacity, to protect our people against threats to our values and challenges to peace and stability.”

Without being named, all the imperialist leaders know that the main “threats” they are pledged to confront is Russia.

Most media coverage of the D-Day commemorations have centred on Trump barging into European politics and demanding that Britain, Germany, France toe the US line. But no comment has been made over the failure to invite Russia to the commemorations in either Portsmouth or Courselles-sur-Mer.

It was the Soviet Union (1917-1991) that played the central role in the defeat of Hitler’s fascist armies between 1941 and 1945, in the face of losses whose magnitude is still almost impossible to comprehend. The Soviet Union lost 27 million people fighting fascism, 14 percent of its population. Russia’s foreign ministry spekewoman Maria Zakharova issued a sharp rebuke Wednesday, saying that the D-Day Allied invasion did not determine the course of the Second World War and that it was the actions of the Soviet Union that secured victory.

Even as they marked the battles that led to the end of the most bloody war in world history, the imperialist powers are seeking a fresh carve up of the world that is preparing the way for another, more deadly conflagration.